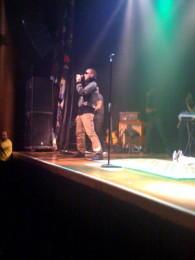 Signing and dancing, Posner attempts to connect with the crowd.

Flashing lights. Screaming fans. He walks on the stage and begins a song on piano. He abruptly jumps up and shouts, “San Diego are you ready?”  Mike Posner performed Sept. 17 at the House of Blues in San Diego, showcasing the songs from his newest album “31 Minutes to Takeoff.”

“Put your hands in the air!” Posner reminded his audience. The show was entertaining but I felt Posner didn’t connect with the audience. Most of the show, it seemed like he was singing in front of the mirror and I would have enjoyed feeling more of a connection with him.

Although his songs all had nice beats, lyrics such as, “I should have cheated on you” and “Drive your high heel into my heart” came off as cheesy. In his song “Cheated,” the one that he sang about cheating on his ex-girlfriend, not only were the lyrics tasteless but he immaturely mentioned his ex’s name.

Nevertheless, Posner is talented. During his encore, Posner performed his hit song, “Cooler Than Me,” that he produced in his college dorm room. During the song, he wore the same outfit as in his music video for the song, and his fans all sang along.

Posner has a Timberlake appeal to him and overall is an entertaining artist. Even though most of his songs sounded the same, his jumping into the audience at the end of the show definitely added excitement for his fans.