Four guys in their early 20’s stare out into the audience right before the lights come on, instruments ready. The screaming fans wait impatiently for them to start.  Just a few years ago they were in high school going to see concerts at Soma, San Diego.  Who would of thought they would be here performing at that exact venue? Allstar Weekend has definitely come far over the past few years.

“San Diego’s the best place in the world” said Zach Porter, the lead singer of Allstar Weekend.  The band, originally from Poway, answerd questions in a group interview at Soma, San Diego on Dec. 17.  They talked about how it felt to be home for the first time on their headline tour.  “You have to get away to realize how great it is,” said bassist Cameron Quiseng.

Members Porter, Quiseng, Nathan Darmody, and Michael Martinez started their band in high school.  Their professional career kick-started after a Disney casting director recommended them to Radio Disney.  They landed the last spot in a Radio Disney competition and were later signed by Hollywood Records.

The pop rock band has the feel of The Jonas Brothers, Boys like Girls, and Ready Set it currently holds one of the No. 1 spots on Radio Disney. Its catchy teen-appealing music is beginning to break out of the Disney circle, however, and will take some getting used to. “It’s weird when we hear our music outside of Disney,” said Quiseng.

Although the band no longer leads a ‘normal’ life, they still get to do some of the things they used to during free time.  Watching movies, sleeping, and texting girls are on their immediate list.  They enjoy listening to artists such as Passion Pit, Lady GaGa, Chris Brown, and childhood favorite Blink-182.

The band hopes to collaborate with mainstream artists in the future such as Kid Cudi or MGMT.  The band mentions that it wouldn’t mind collaborating with fellow Radio Disney artist, Selena Gomez.

Allstar Weekend’s advice to aspiring musicians is simple. Quiseng and Porter stressed using the resources that are available to everyone, especially YouTube in order to get ‘out there’.  They also suggested writing relatable music and staying devoted. Lead guitarist and backup singer Darmody said to be sure about what you want. “Always know what you’re doing and be happy…make sure what you’re doing makes you happy.” 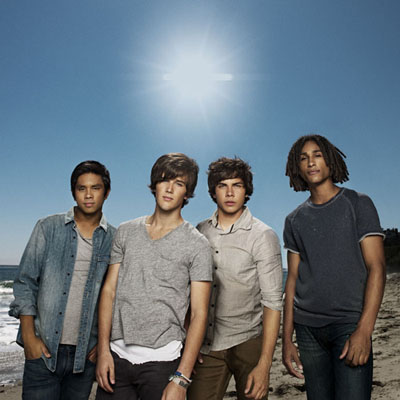