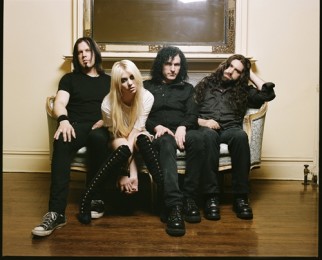 Taylor Momsen, commonly known for her character in “Gossip Girls” as Dan Humphrey’s little sister, is now in an “edgier” role in the entertainment business with her band, “The Pretty Reckless.” With her new-found black raccoon-looking makeup and combat boots, comes her first album, “Light Me Up.”

The Pretty Reckless released its first single last year on May 23, “Make Me Wanna Die.” The song starts off with an eerie intro and leads into a heavy guitar and drum solo.  Momsens voice is a raspy, deep tone that goes perfectly with the music she is trying to pull off.

Other songs on the alternative/rock album include “You,”- “Light Me Up,”- “Since You’re Gone,” -“Miss Nothing,” and “Just Tonight,” a slow love ballad. The video for “Miss Nothing” came out on July 20 on Vevo. The video takes place on the day after the last supper and features her dancing and crawling, while kicking food everywhere.

The band announced on Jan. 18 that it will be headlining its own tour which kicks off in Los Angeles on Feb 11. The CD will be released in the U.S. on Feb. 8, but if you can’t wait until then, you can listen to the whole album on YouTube.