Each year, the Grammys celebrate some of music’s greatest achievements. Though awards are the basis of the annual show, the Grammys are also well known for their firework live performances, often from Grammy nominees and past recipients. This year’s telecast was especially successful, with an average of 26.5 million viewers—no surprise, due to spectacular performances from Eminem, Lady Gaga, Arcade Fire, and more. The Mustang covers some of the most stunning performances from the evening.

After a memorable and near-blinding performance Sunday night on the Grammys, indie band Arcade Fire won the sacred title of “best album of the year” for “The Suburbs.”

The band preceded the win with their first ever Grammy performance of “Month of May,” one track off “The Suburbs.” The performance was quite riotous. Band members were screaming throughout most of the song, which I hadn’t particularly noticed while listening to the studio recording. Strobe lights took unfortunate epileptics in the audience by surprise and—what’s this, BMX bikers with camera helmets?! The strobes and biking trips somehow didn’t seem like too healthy of a combination.

By the end of the song, my mom had already left the room mumbling about how nonsensical the yelling was. The performance was stunning, but no doubt targeted towards a younger, more energetic crowd.

Shortly after the performance, “The Suburbs” was named best album of the year. The Montreal-based band members seemed genuinely shocked and very smiley while accepting the award. When they started to play “Ready to Start,” lead singer Win Butler joked that everyone could walk out to the song. Credits rolled and voiceovers played as the very recently victorious band performed—am I the only one who feels like that’s a little bit demeaning for artists who have just won such high titles?

The buzz in response to lesser known Arcade Fire beating out mainstream artists for “best album,” including Eminem, Lady Gaga, Katy Perry, and Lady Antebellum has been especially prominent in the blogging community. The new Tumblr blog “whoisarcadefire.tumblr.com” was created because several individuals are unaware of the band’s existence. Even Rosie O’Donnell tweets, “album of the year ? ummm never heard of them ever.”

The thing is, Arcade Fire was never underground to begin with. Though the band’s anonymity is questionable, its talent is undeniable—as proven by their big Grammys win. 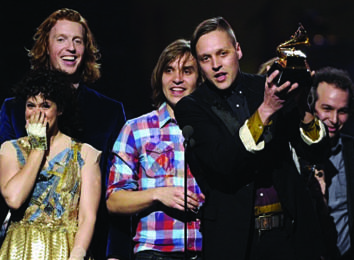 What do a swing, an enormous train and wedding videos projected onto a screen have in common? Well, usually nothing. But Katy Perry blended these elements into a heaven-like performance at the Grammys on Feb. 13. The performance began with Perry sitting on an oversized, flower-embellished swing, singing her ballad, “Just Like the Movies.” Perry is most known for her powerful pop songs which have infiltrated the radio, but she showed a softer, more romantic side in her performance.

Halfway into the song, the swing was slowly lifted, revealing Perry’s enormous, flowing train, which covered the entire stage. Then, “awwwwwww” inducing video footage from Perry’s wedding with Russell Brand was projected onto the curtain-like train. Her fantasy-like performance felt heavenly and so gosh-darn cute. 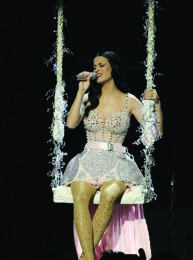 Everyone seems to agree that Eminem had the best performance of the Grammys this year. Rhianna’s off key squeaks only made him look better, though Skylar Grey’s voice complemented the beast and Dre really beautifully. He spit rhymes like no other wangster and performed looking just like the wild domestic abuser that his music claims he is and that we all know and love, giving us plenty of fist throwing and boot stomping.

A seemingly meek and humble grin even appeared on Eminem’s face when his old mentor Dr. Dre came out to sing with him. Old friends were reunited and we all got a glimpse of the usually hardcore-fire-setting-pill-popping Eminem’s sweet and reverent side. I think we can all agree that he deserved at least a few more of the 10 awards he was nominated for rather than just the best rap album and the best solo rap performance awards that he received. Maybe next year the Grammys will allow him to be honored outside of just the rap realm as the universal musical sensation that he is.