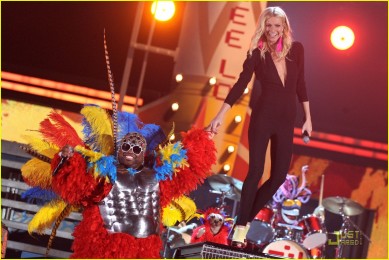 Everyone has thought it, everyone has wished they had the nerve to say it, and Cee Lo Green has perpetually blasted it across the entire nation. Green has essentially given the middle finger to all  those losers we’ve all had to deal with and has people swooning over his lyrics.

It’s no wonder that Green’s “F___ You” can be noted as one of the most influential songs of 2010. After being chosen to perform the clean version, “Forget you” at the 2011 Grammy awards show, Green entered the stage Sesame Street-style. Adorned in a feathery assemble, similar to an Amazonian parrot, Green sang at a piano alongside puppets. Though the puppets’ appearance at first seemed irrelevant, they drew attention to the song’s lighter notes and emphasized the mockery Green establishes in the lyrics. It’s quite rare when a performer can sing the clean version of his or her song yet all the while fulfill the same effect, the same depth – and Green did it. Short of getting up and dancing along with the singing puppets and bellowing out “Forget you Ooo Ooo Ooo”, Green’s act evoked in me what a performance of a true star should, utter delight.