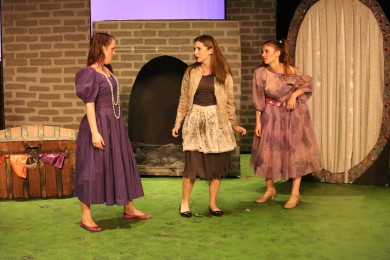 On Jan. 10, the opening night of the play, the theater was packed with students, parents, and alumni. When the song “Royals” by Lorde silenced and the bright lights dimmed, the crowd grew quiet and watched the villains of the cast known as the seven deadly sins begin on stage — a slothworm, an angerbird, an envysnake, a gluttontoad, a greedmonkey, and Lust — along with an eighth named Sadness, the most haunting of them all, played by sophomore Maggie Lombard. The eight villains despise humans, especially the main character, Ashgirl, played by sophomore Ciara Reiter.

“The Ash Girl” tells the story of Ashgirl, a girl who lives with her superficial stepmother and two evil stepsisters after her father was taken by the evil Lust. Ashgirl cleans up after her sisters, sleeps in the fireplace, and has ashes in her hair, hence her name. When Ashgirl is alone, the seven deadly sins and Sadness creep on her and make her feel unwanted, discouraged, and lonely.

When Prince Amir (sophomore Jewels Weinberg) is searching for his princess and King Paul (senior Wesley Whittlesey) and Queen Zehra (freshman Anahi Palacios) announce the royal ball, Ashgirl is determined to go. With the help of the Fairy in the Mirror (senior Madeleine Karydes), Ashgirl secretly goes to the ball.

What would be a “Cinderella” story without dancing with the prince, leaving at midnight, forgetting a sparkling shoe, winning the Prince’s love, and living happily ever after? “The Ash girl” is dark, twisted, romantic, and worth seeing. Student tickets are $8 dollars and adult tickets are $15, and the next show times are Jan. 16, 17, and 18.