Despite its haunting beauty, Edgar Wright’s new psychological thriller fails at its core 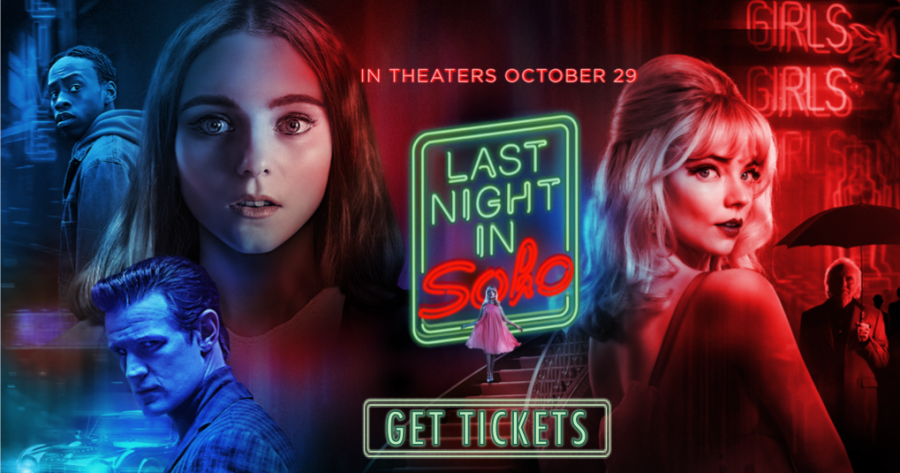 Disclaimer: This article contains spoilers for “Last Night in Soho.”

Pastel pink set against prostitutes shooting up heroin, frenetic twisting bodies with glittering hair and black-haired men that look like Cary Grant but carry knives in their pockets. This is the 1960s London of director Edgar Wright’s “Last Night in Soho,” a monstrous heap of deliciously empty characters, beautifully choreographed breakdowns and a horribly messy plot.

Our main character is Eloise “Ellie” Turner, a cute little mouse, nostalgic for the ‘60s like nobody’s business. As she prepares to move from idyllic Cornwall to fashion school in dirty London, she packs her enormous suitcase full of classic records and tape measures. However, Ellie does not want the London she sees in front of her when she arrives. Like most nostalgic teens, she yearns for a time and place long gone, recognizable only in some run-down storefronts and old posters that dot the city.

“Last Night in Soho” becomes interesting at around the 15 minute mark, when Ellie moves out of her dorm into an old woman’s upstairs apartment, a perfect artifact of mid-century decor. Each night, as Ellie falls asleep in her little lost world of floral curtains and gilded mirrors, she is transported into the London of the 1960s. In a half dream-state, she follows Sandie, a glamorous waif portrayed by Anya Taylor Joy, as she tries to make it big as a nightclub singer. As in Bergman’s “Persona,” these women are completely different species (one shy and endearing, the other dazzling and confident), yet they remain linked by an unfathomable thread of terror and hope that happens to attach itself to most bright-eyed young women in big cities.

The time we spend in the ‘60s with Sandie is the best part of the movie. The cinematography flashes brilliantly against grandiose set and costume design. Taylor Joy is her usual Beth Harmon (of “The Queen’s Gambit”) self, blinking her huge eyes and shifting her hips with a cool smile on her lips. Her love interest Jack, portrayed by Matt Smith, is as suave as a cologne ad. Wright is fantasizing about the ‘60s like a music video director; everyone’s a hot trope, with lipstick and cigarettes the only things sticking out of their Chanel purses.

Thomasin McKenzie, who portrays Ellie, puts on some false innocence, wide eyes and a cute accent and expects it to be a character. Ellie is unreasonable, annoying and moralizing. As the minutes wear on, and she becomes more whiny than endearing, we lose our respect for and attachment to our guiding star. When Sandie finally loses herself to a den of corruption, McKenzie’s bright eyes and false shock take away from the unruly seediness of the bar and only make our own reaction to the scene less potent, falsifying and cartooning the darkness of the female experience.

Sandie’s journey into madness and jaded depression is one of the most compelling sections of “Last Night in Soho.” Her increasingly frenetic dancing in the club is beautifully choreographed and elicits a bitter and strange emotional effect. The fire of her hatred and deep-seated horror at her surroundings fuels Sandie’s swinging, spinning and false ecstasy, a band-aid of release on a deeper loss of her body, her identity and her mind. Quick shots of drug abuse, coercion and sexual violence allows for any apathy in the viewer to dissipate into vicarious panic.

When we get back to the present, however, the film becomes trite and unreasonable. The handling of John, the only major African American character in the film, is two dimensional and borderline insulting in its simplicity. Portrayed by Michael Ajao, John is the plot point character at its worst, chasing after Ellie for no apparent reason besides the fact that he’s a “nice guy.” Although he is constantly put in danger by his love interest, he stands by her as only an unrealistic movie character could. As an accomplished director, I think Wright should know by now that reducing characters to only saintly qualities takes away their humanity and ultimately insults his audience’s intelligence.

The movie, although Wikipedia claims it is in the psychological horror genre, provides almost no real scares. Especially for a desensitized audience of “American Horror Story” viewers, “Last Night in Soho” is doubtful to elicit more than a gasp. The “monster-ghosts” of the story are silly in their execution and look more like they belong in the Haunted Mansion at Disneyland than a slasher-thriller.

The twist at the end of the film makes little sense and seems to negate all the emotion we’ve built up for Sandie. The connection between Ellie and Sandie is, in the end, practically meaningless – a little nostalgia and a shared physical space created this? Ellie never becomes Sandie, not even close, although the film strongly implies she will during its first half. This is disappointing as it would’ve added another layer of insight and drama to the unruly second half. If Wright had provided a stronger link between the two women, perhaps the ending would’ve had more impact, but, as it stands, the final reveal and subsequent scenes hold little weight and don’t make much sense character-wise.

The final denouement scene is as corny as the worst Hallmark movie; it’s too illogically wholesome to stand, especially after watching such an arguably cynical film for an hour and a half. What is this movie trying to say? Is nostalgia a horror show that will suck us in, make us abandon our physical reality and eventually burn our modern skin? Or is it actually good for us, as the ending might suggest, helping us grow and find ourselves? Is it a personality type? Is it a disorder? Is it, in the end, nothing but entertainment for bored little girls? Maybe nostalgia’s morality is better left ambiguous for Wright. To me, however, this ambiguity felt more lazy and convoluted than profound.

Ultimately, Wright’s latest film holds some interesting ideas but never truly comes together. As Anya Taylor Joy winks her final cold “Queen’s Gambit”-inspired wink, I am left confused and infuriated. Perhaps that is because I came to this movie hoping to find an answer to my own nostalgia and was left with more questions than explanations. “Last Night in Soho” may be entertaining at times, but, like its ‘60s characters, it’s mostly a beautiful void. I can see it developing a cult following for its glamour and Taylor Joy’s charisma, but, when I think about all the potential a premise like this had to explore nostalgia as addiction and degradation, I find it hard to root for it to develop any kind of following at all.