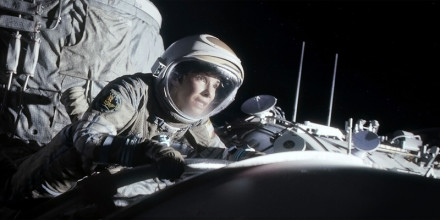 In space no one can hear you scream.

In this thriller, a team of three astronauts suffer and deal with the aftermath of a catastrophic event as they struggle to get back to Earth. Which, as you can imagine, is exceptionally difficult to convey through a helmet in a green screen box. However, Sandra Bullock and George Clooney (respectively, Dr. Ryan Stone and Matt Kowalsky) act primarily with their body motions and voice. Pure terror, relief, and acceptance in the face of the endless void of space frequently make an appearance.

More impressive, their acting shined through special effects that would overshadow most stars (point in case: Avatar).  With innovative methods and meticulous detail to technology, you feel immersed in the space and danger. You’re there with the stress and fear until you’re flinching as meteors race towards the screen, an impressive feat given we’ve become so immune to cheap three dimensional tricks. Forget about seeing “Gravity” only in 3D as an IMAX screen better simulates space’s vastness. Start placing your bets; “Gravity” is bound to be nominated for the Oscar’s special effects  award.

“It’s beautiful, don’t you think? The sunrise.” George Clooney’s words couldn’t be more true. This movie shows many unimaginable sights: the Sun cresting over Earth as the aurora borealis pulses against the stars, an elastic bubble of fire tumbling across the International Space Station, an astronaut’s last nauseating glimpse of space while spiraling into the depths of the universe. To top it off, almost every scene is scientifically accurate in its portrayal of space.

However, we can’t forget this movie is a product of Hollywood as the audience is subjected to multiple scans of Sandra’s scantily clad body while freed of her space suit. That being said, this movie evokes tears, audible gasps, and screams of frustration as the viewers follow every trial and tribulation of the struggling astronauts. All in all, “Gravity” matters more than the 15 bucks in your wallet.