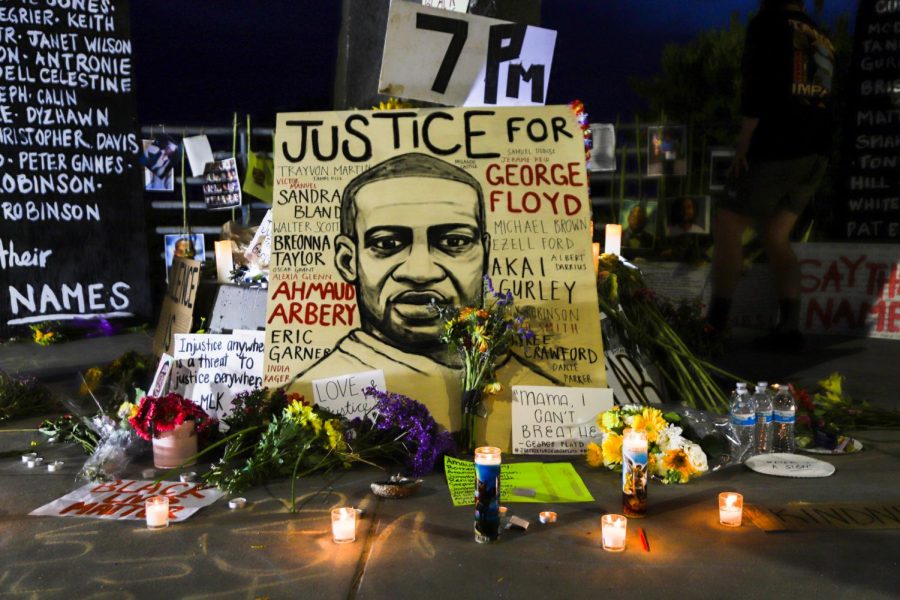 “I can’t breathe.” These last haunting words of George Perry Floyd and Eric Garner —Black men who died in police custody—have been echoed by millions of Black Lives Matter protesters as they flood the streets in major cities across the globe.

These protests are in response to the deaths of Black people at the hands of police, and come after the death of Floyd by white Minneapolis police officer Derek Chauvin. Chauvin kept his knee on the right side of Floyd’s neck for approximately nine minutes while Officers Tou Thao, J. Alexander Kueng and Thomas K. Lane stood by.

Floyd was arrested after a deli employee called 911, suspecting Floyd of using a counterfeit $20 bill, according to the New York Times.

This is, by far, not the first time police brutality and racial profiling have caused injury or death in America.

From 2013 to 2019, Black people made up 24% of those killed by police brutality despite being only 13% of the population, according to Mapping Police Violence.

It is a familiar pattern that many Americans are unfortunately seeing. As an Asian American, I rarely feel unsafe being around a police officer, which is a sentence most African Americans are unable to say. It’s a privilege and there’s no shame in acknowledging that.

Many people posted black squares for #BlackoutTuesday and are tagging 10 friends on their Instagram story to stand against racism on social media, but that will not be enough. I know there are good intentions behind some of these posts but there’s no action. It’s performative and known as virtue signaling.

“What are you following me for?” Trayvon Martin, 17, who was shot and killed in 2012, while he and his father were visiting his father’s fiancée and her son at her townhouse said, according to Tampa Bay Times.

“I don’t have a gun. Stop shooting,” Michael Brown, 18, said before he was shot and killed in 2014 while he was going to Ferguson Market and Liquor, according to surveillance video released in 2017 documentary film “Stranger Fruit.”

“It’s not real,” said John Crawford, 22, who was shot and killed in 2014 while he went to buy marshmallows, chocolate and graham crackers at Walmart, according to the Washington Post.

After the Black Lives Matter movement outlives a social media trend, do not say that Black people should calm down, it’s not our right as non-Black people to tell Black people how they should feel. We don’t get to decide how to put out the fire when the fire was started and perpetuated by us.

But simply arresting these four police officers is not enough. We need change in America so we do not see a repeat of Floyd. How many more lives need to be taken until something is done to address this?

It’s time to demand police accountability from the government. It’s time to make donations to places like The Bail Project, NAACP Legal Defense Fund and more. It’s time to go and vote for our rights and the rights of minorities. It’s time to support one another, address systemic racism, and educate yourself and others about such topics.

To say that African American people in America should be treated equally is not a radical statement. This is not a political issue, this is a human rights issue. It’s time for a change.