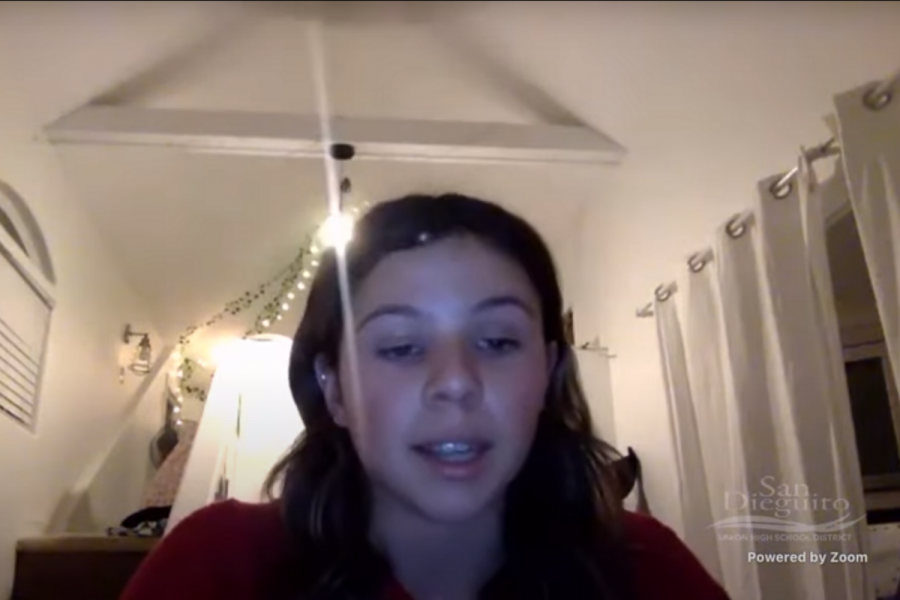 Gallery|2 Photos
Screenshot of SDUHSD Board Meeting
Cassie Miller, San Dieguito Academy junior, speaks out about her concerns regarding reopening schools on Dec. 15, 2020

The school board’s representative job was different than any other year. This year especially, due to the reopening plan, having a passionate and determined school board representative was crucial. While the typical tasks include attending monthly school board meetings, giving a report on what your school has been doing academically, in the arts, and sports, Junior Cassie Miller, took on the crucial responsibilities, owned her voice, and inspired many giving every student a voice.

Miller has always been interested in the government aspect of being part of the Associated Student Body. Inspired to take on the challenge, Miller became the current school board representative for San Dieguito Academy. Additionally, Miller has been an involved student body member since freshman year, serving as the junior director and incoming senior director alongside Katherine Huang and Lilah Regan.

This year has been a challenging year in all aspects, especially regarding school and the controversial reopening plans. Miller plays a vital role in representing San Dieguito back to school plans.  “I have definitely attended a lot more meetings. It’s overall more high pressure than I expected,” Miller said.

Miller makes sure to gather opinions in the Google Meets chat, such as her history class. “I want to make sure I’m hearing everyone’s opinion…I have to make sure every opinion is represented,” Miller said.

It is also important to Cassie to discuss the concern of reopening after winter break during the meeting. Through all her discussions, Miller was well aware that students and parents were scared about education quality, such as the disparities in AP classes. Miller stood her ground during the board meeting, even though there were different perspectives and opinions regarding reopening plans.

San Dieguito recognized her courageous presence and posted on Instagram with a photo saying, “Always speak the truth, even if your voice shakes.”

Miller reflects, saying that she was a bit hurt after the reopening meeting, but she appreciated all the love, support, which she’ll never forget. “I got out of that meeting was tons and tons of emails, thanking me from random people in the district. From middle schools and high schools all around the district telling me how much my voice matters,” said Miller. “I think that was one of the craziest experiences of my life. I just woke up to an outpour of support.”

About the Contributor
Sasha Marc, Staff Writer
Leave a Comment