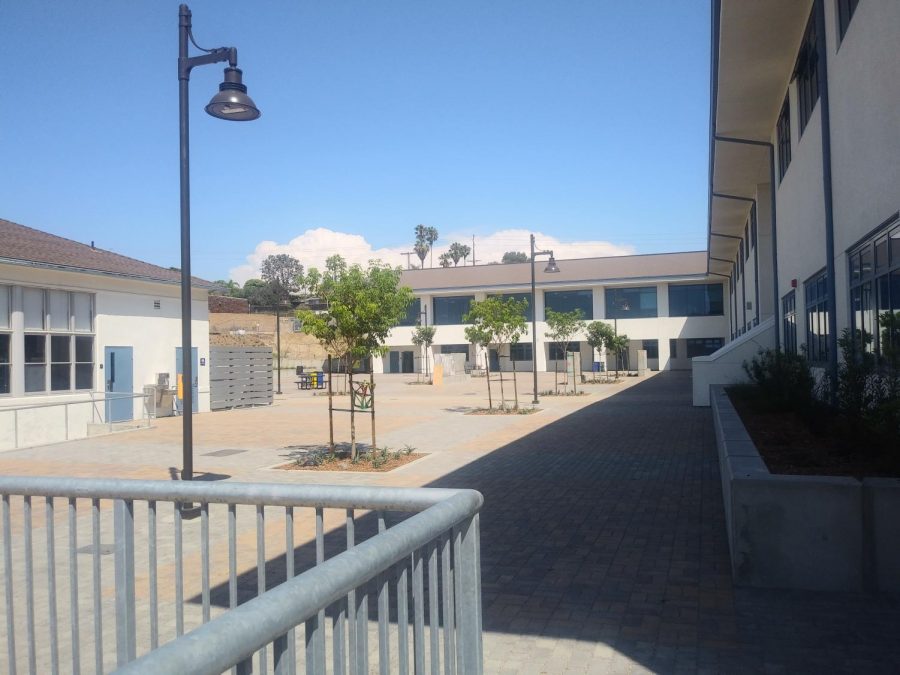 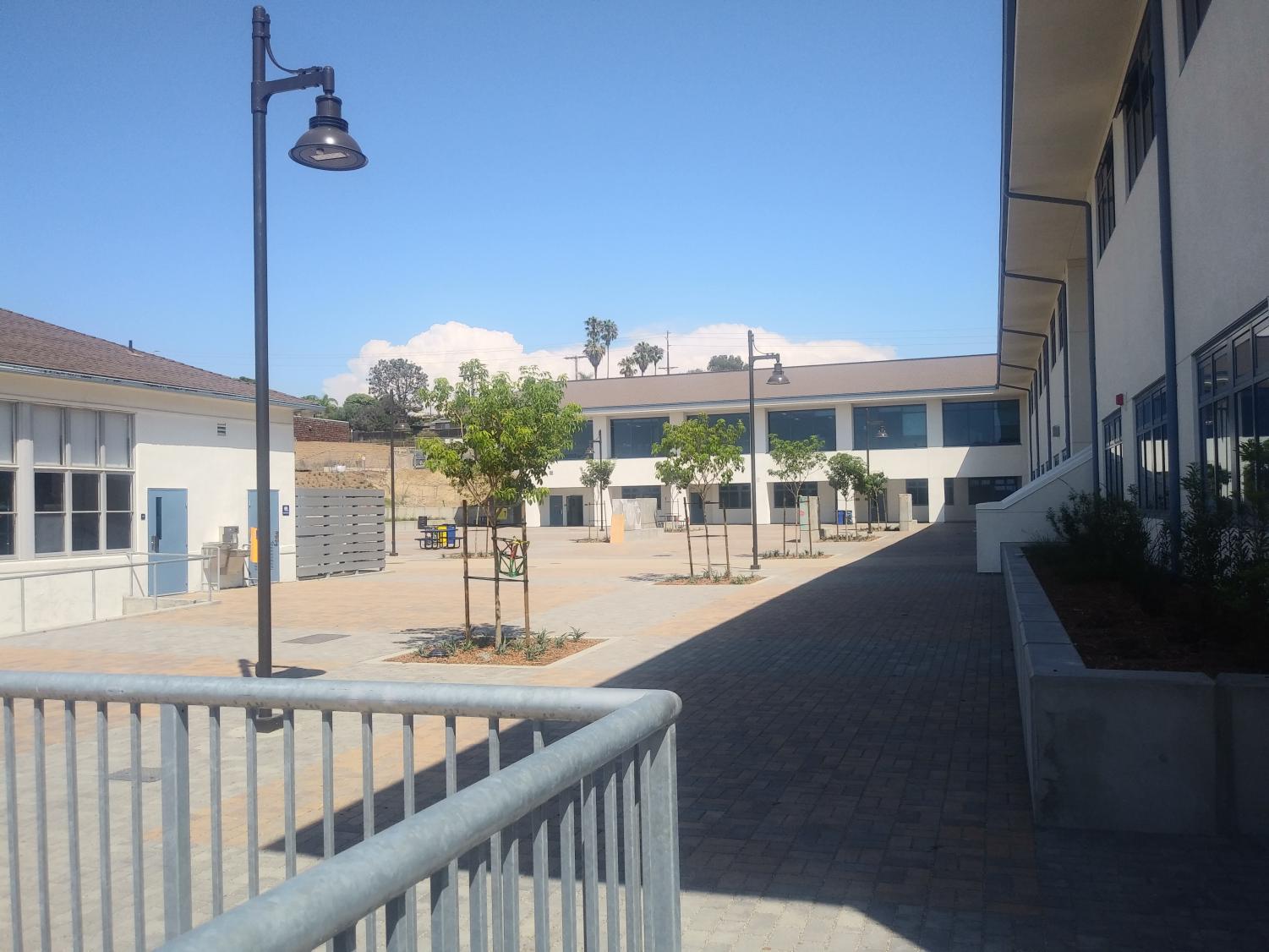 With concrete flooring, air conditioned interiors, and state-of-the art, larger-than-before classrooms, there is plenty to like about the new building. The architecture is easy on the eyes, the foyer and courtyard are great places to relax or admire the student artwork chalked on the slabs, and an impressive amount of classrooms line its halls.

Started two years ago, the Arts and Humanities building is said to house around two-thirds of the schools student population at any one period, according to Assistant Principal Celeste Barnette.

It also unites department faculty once scattered from the P-Buildings to the 120’s. English, art, languages, and more are housed in this massive two-story building that provides an impressive spectacle of San Dieguito Academy architecture.

“There’s more positive than negative,” said Bob Teisher,  APUSH and Film and Society teacher. “The sound system here is great, the overhead visual is really good and I think for Film and Society it will be cool. It will be like watching movies on a good quality screen.”

Teisher does interject, however, that the 120’s were “more isolated,” and didn’t “have a lot of traffic going by,” an aspect he misses. He also said he misses “the funkiness of the old portables. Kind of SDA funky.”

But he has found a way to remedy such.

“I brought some of my own stuff down and it has the same kind of vibe as the old room. I decorated it that way,” he said.

Senior Samantha Addington said she doesn’t quite agree. “SDA is very bright and cheery but the hallways [in the new building] are not. There is more of a community and it’s open campus so a closed off building, especially when it’s arts and humanities, is strange,” she said.

However, a few problems have arisen since the start of school. For one, the argument of whether students should be able to paint and decorate the stark structure of the new buildings has come up once again. This time, however, the situation comes with a silver lining, as students are able to express their creativity on the four concrete slabs decorating the courtyard.

On the other hand she said she believes the no-go to paint or decorate, much like the Math and Science building, is “stifling the personality of SDA because we’re really artistic and we like to express ourselves and I feel like we should be able to.”

Heather Jacobs, Yearbook and English teacher, said, “ I appreciate the student art and creativity so I think for me I would rather have a specific place for that but maybe not on the building. I don’t want to get rid of the creativity but maybe create some sort of space just for student expression,”

Aesthetic issues aren’t the only problems to arise. Jacobs, who has Muscular Dystrophy, said she encountered some issues arising at the start of the year.

“It was a hard start to the year for me just because the parking lot isn’t finished yet and the elevators were hit or miss. I would get emails some days that it was working and then later in the same day it wasn’t working so I actually didn’t come into my classroom until last Friday,” she said.

Jacobs also stated that, “Admin and staff have been very helpful trying to get me up here.”

“It’s really nice to have all this storage,” Jacobs said, echoing the excitement of other teachers such as Teisher who now have space to store things once causing clutter. “I think the desks are nice…it can be a trip hazard with peoples’ backpacks but these tables are cool because they have hooks. Just those little tiny things make a difference for me as a teacher,” she adds.

Jacobs said, “I think SDA is beyond the buildings to a certain degree. I think buildings are buildings and it’s always the teachers’ goals to make sure the school still feels cohesive and that students still feel connected.”