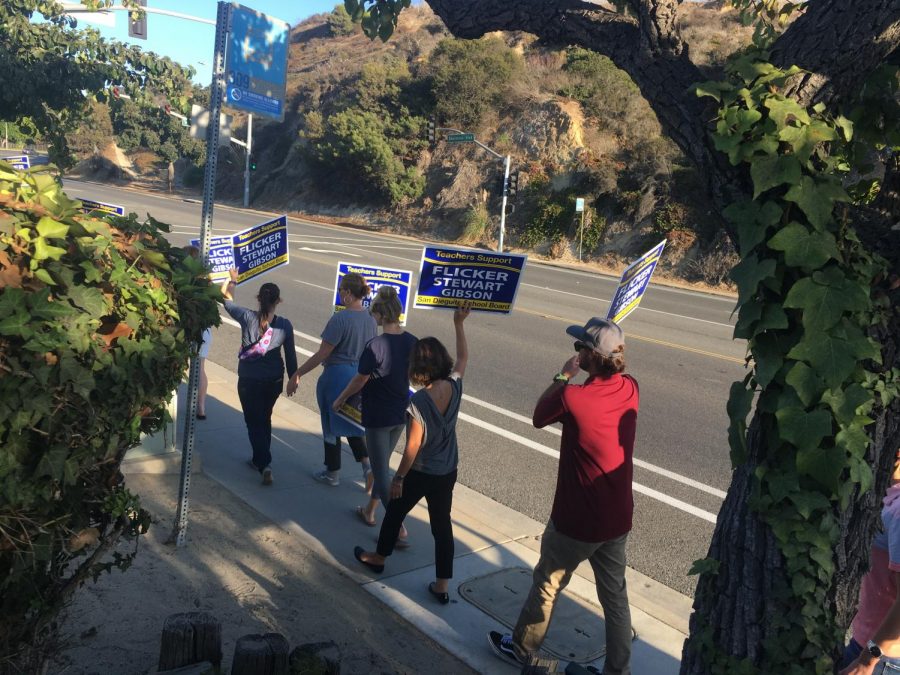 SDFA Criticizes School Board Incumbent. What does she have to say about it?

By Taylor Rudman, Editor in Chief

After a demonstration outside the district office last Thursday, San Dieguito Faculty Association members criticized incumbent Maureen “Mo” Muir for her past school board decisions and what they said was a lack of involvement in district activities. Muir responded that she supports teachers, has reached out to the teachers union numerous times, and is the most active member on the school board.

The SDFA demonstrated in support of three school board candidates. In Area One, Muir is running against the union’s choice, newcomer Amy Flicker.

Tim Staycer, SDFA president and Torrey Pines teacher, said, “Muir has consistently been inconsistent: We have been watching Muir’s incompetence for 4 years now.”

SDFA members cited Muir’s vote against teachers raises in the past as one of the reasons for their opposition. SDA counselor Duncan Brown said, “Mo Muir has voted against upholding grades that teachers have done, she’s voted against raises for teachers, and has not been supportive to teachers in general.”

In an email, Staycer wrote, “Said she’s safety first and voted no on safety resolution to prevent violence in schools. Says she supports teachers and voted NO on raise for teachers after 8 years of no raise. Muir would have you believe ‘the sky is falling’ and that our district is on the ledge of ruin!”

Muir responded, “I did not vote for the teacher’s contract- the contract that changed the pupil ratio to teachers. The word that was changed:  ‘maximum’ class size to ‘average’ class size. I will not vote to raise class sizes.”

Another point of concern was Muir’s involvement in school activities. CCA counselor Ashley Bahner said, “I’ve never seen Mo Muir on our school campus, once.” Bahner, a district employee for 13 years, said she did not initially recognize Muir when meeting her at the 2018 College Night & Fair.

In regard to her involvement in district activities, Muir said she “attended back to school nights at CCA, SDA, Oak Crest, and Diegueno. The board split the district -for maximum board attendance. I had the pleasure of speaking with many parents. Great attendance at every school.” In addition, she said she volunteered her time on the first day of school at LCC and attended their last two football games. 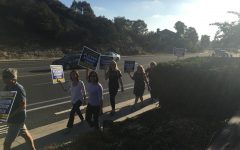 Did You See the Teachers Demonstrating This Week? Here's Why.

In response to questions from The Mustang, both Muir and Staycer wrote emails. Their comments follow:

I want to let you know that I have reached out to the Teacher’s Union – many times. I would love to meet with them. Teachers are the backbone of the district. I appreciate their tireless devotion to our students.

I did not vote for the teacher’s contract- the contract that changed the pupil ratio to teachers. The word that was changed:  “maximum”class size to “average” class size. I will not vote to raise class sizes.

You asked about my school activities. I am the most active board member, on our board.

Since the August 2018 Board Meeting:

I was appointed by my board. There is another board member, two   teachers, and admin. staff. The board will expand to parents, community members, and community organizations.

I am Vice President of both.  Appointed by my board members

Many meetings with search firm.

The board split the district -for maximum board attendance. I had the pleasure of speaking with many parents. Great attendance at every school.

Love seeing all the kids!

Our Interim Superintendent Perondi  really cares about students. So lucky to have him.

I am honored to serve the students, the parents, and the teachers, in our district.

They would focus on district projects. These projects would not take money out of the district budget.

a District Pool, a North Performing Arts Center, and a Sports Complex or a Sports Partnership(at the Calle Barcelona  site).

I have been advocating for a pool, and the Calle Barcelona site – for 4 years.

This year, I facilitated the grants for:

There is great community support for our district.

Thanks for reaching out,

1.) Why did the SDFA choose to support Flicker, Stewart, and Gibson?

San Dieguito Faculty Association who is comprised of 98/% of the certificated staff of the San Dieguito School district has elected site reps from each of the 10 Schools in our district and an additional 4 officers also elected by the SDFA members who together make up our Executive Board E-Board, by way of thhe E-Board Election Committee we have vetted each of the candidates that had applied for SDFA’s endorsement : I.e., Background checks, interviews, applications, conversations with other members who know the candidates, and after hours of conversations it was very clear which 3 candidates we needed to Endorse.

2.) For what reason do they oppose the other candidates?

We do not oppose James-Ward and Mossy,

As for Cheryl James-Ward running against our candidate Kristen Gibson in zone 5, James-Ward has  experience at the college level (SDSU Instructor) and as an employee of a Charter School in San Diego she has not been involved in SDUHSD. James-Ward has a very impressive resume but has chose not to be apart of our district, until now and refused SDFA’s request to interview for our endorsement leading SDFA to believe  that she has some sort of personal agenda. While her children attend charter schools in San Diego, James-Ward is disconnected from SDUHSD again making Kristen Gibson the more qualified candidate (see above) for our school Board.

Muir has consistently been inconsistent: We have been watching Muir’s incompetence for 4 years now,  Said she’s safety first and voted no on safety resolution to prevent violence in schools. Says she supports teachers and voted NO on raise for teachers after 8 years of no raise  Muir would have you believe “the sky is falling” and that our district is on the ledge of ruin! I have been attending school Board meetings for the entirety of Muir’s tenure as Trustee and can tell you that Muir is often scattered and takes up the school board meetings with boasts about her son and connections to local politicians that include her husband. Says she “strong” on keeping drugs out of schools but has a soft stance on moving to expel students who are found out to be dealing drugs at school. 5 times she voted against expelling drug dealers from our schools.

Lea Wolf who is running in zone 5 prides herself as whistle blower, she has been disrupting every school board meeting from the dais by speaking on personal agendas (comments are only suppose to address school Board agenda items)  and regularly asks questions from the audience without regard for decorum of school board meeting protocol. She seems to enjoy heckling from her seat in the crowd and has been warned more than once to keep quiet or be removed. I believe you got to witness some of her shenanigans at last Thursday’s meetings.  While she is not a legitimate candidate, SDFA has no respect for her ignorance of governance and would consider it criminal to see her as a Trustee.

3.) What was the goal of this demonstration?  We were supporting our candidates with the goal letting our community know who SDFA ENDORSES. We know the community Loves and appreciated it’s teachers, counselors, school psychologists and the other support staff that make up our certificated personnel but don’t have the time to research which candidates support our district’s students. It is incumbent upon SDFA to do its diligence to bring forward the most qualified trustees to promote not tear down our wonderful school district.

As for Mossy in zone 3 and James-Ward they both lack experience in our district James-Ward’s children go to Charter schools and Ward-James works at Charter School.  We feel that there could be a place for Charter Schools in America but it certainly is not in the confines of our school district, secondly Cheryl James-Ward sees herself  as a champion of the underserved in places such as Compton we do not believe that we share those same needs.

4.) Are you concerned at all about any backlash (from parents, teachers, students, admin)?

As stated in parent surveys and by past elections results the large majority of parents and community enjoy living in a school district that consistently ranks among the elite public school district’s in the entire State. We are clearly the number 1 school district in the county in just about any measure of effectiveness e.g., graduation rates, college admissions, athletic teams, academic teams, robotics teams, test scores, AP scores.

The only backlash comes from squeaky wheels such as Wolf and some of her supporters, they like to fabricate information and see if any of it sticks. Our administration works collaboratively with us meaning that we let school personnel know of any plans to campaign so they may vet the legality of what we do (as we did on Thursday) and we have nothing to be concerned about.

5.) How else may the SDFA support their candidates? If with donations, how much?

Signs in our cars, reach out to community to post signs, campaign contributions TBD based on need and support from The California Teachers Association. Direct contributions to the candidates campaign.  Every penny we donate and spend on campaigns is public record.

6.) Have these sorts of demonstrations happened in the past? Are they common?

Every election for school board election SDFA has used rallies to promote our endorsed candidates.

Per the guidelines of The county of San Diego Registrar of Voters and the State of California: while campaigning it is imperative that we do not block any entryways, sidewalks or flow of traffic. Local laws ask us to “not loiter” therefore, if we move we are not loitering.

Has the SDFA been ridiculed for illegal campaigning in the past?

As a general matter, free speech rights protect school employees’ right to place signs, stickers, etc. bearing political messages on their cars, even when those cars are parked on district property, as in a faculty parking lot. Such signs, however, should not suggest in any way – either by their actual message or their placement – that the school employer has endorsed the message. A sign sponsored by the union should clearly indicate that it is a union sign. And while a district may lawfully restrict signs that interfere with district operations, this is unlikely to be the case for regular-sized signs placed, for example, on car windows or bumpers.

8.) Was the crowd composed of mainly teachers and counselors? Any other staff members?

All SDFA Members and some their members family.

Thanks for making SDFA proud of it’s students

View Comments (1)
About the Writer 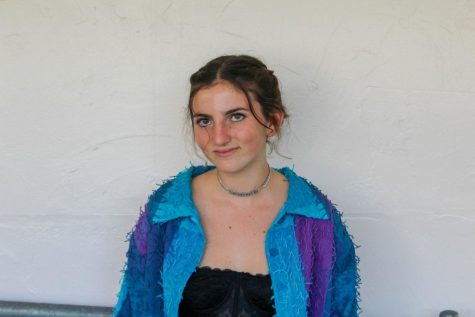