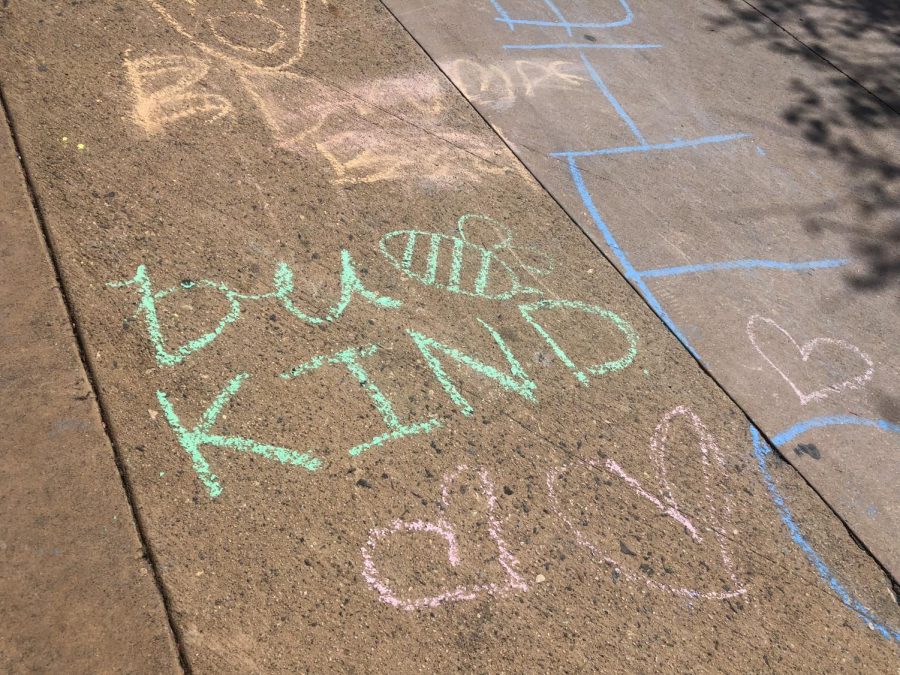 Gallery|2 Photos
Photo by Joice He
Students were encouraged to draw kind messages in chalk for kindness week.

Kindness week sidewalk chalk activity gets out of hand

Custodians, administration, and some art students spent second period scrubbing away
inappropriate sidewalk chalk drawings left around the gym from kindness week activities on
Tuesday. Although the drawings were not hateful, they were deemed not appropriate for the
school environment, according to Assistant Principal Celeste Barnette.

While freshmen and juniors were taking the California Healthy Kids Survey in their second period classes,
sophomores and seniors were gathered in the gym to do some kindness week inspired activities
hosted by PALS and ASB such as painting rocks, writing kindness grams, and drawing with
sidewalk chalk.

Problems arose when supervisors discovered that the sidewalk chalk had spread outside of the
area it was meant to be contained in, and that some students had written or drawn immature
things.

“The intention wasn’t to go write and draw whatever you want, it was meant to be…a kindness
quote or a smiley face or a heart – something that would lift up someone’s spirit,” said Barnette.
“A lot of what was chalked was perfect; it was exactly what we wanted! Some of it was adorable
and positive, and then a few people – and I knew a few would [albeit] more than expected –
took it in another direction.”

Senior Drew Atkins said, “[The supervisors] tried to keep it under control; they weren’t like ‘free
for all!’ But it definitely got a little out of hand.”

Angela Jackson’s second period art students as well as custodians Luis Tolento and Gabriel
Figueroa helped clean up the drawings for the remainder of second period.

“We either turned it into something else – a lot of flowers bloomed where other things were – or
we scrubbed it out,” said Barnette.

Though it was to be expected that some people would be inappropriate, there were many more
kids than expected who participated in the activity and the situation became difficult to control
and to supervise, said Atkins.

Barnette said, “They were supposed to be in a much more contained area where they were
easier to supervise and to fix [drawings] if [they] needed to be fixed…It got out further than we
expected…I’m the administrator so I’m ultimately responsible.”

A major concern for Barnette was that the incoming freshmen parents were arriving that night
for an elective fair, and the drawings were not something that embodied SDA at all, she said.

“I don’t want new parents to come in and get the wrong idea about our school, because that’s
not our school…I didn’t even want our students seeing it,” said Barnette. “I don’t want incoming
parents to see it, but it was really important to me to get it undone before lunch happened. I
didn’t want other students who didn’t contribute to that to have that negative feeling.”

“The good news is we were prepared to take care of it. Sidewalk chalk is super easy to wash
away…so I knew we could quickly take care of it if there was an issue,” she said.
Despite the situation with the sidewalk chalk, the rest of the kindness week activities went
smoothly, according to Barnette. The rocks painted at the event will be used to make a new rock
garden on campus.

“The most important thing is that the California Healthy Kids Survey is done, and that was what
it was all about,” said Barnette.