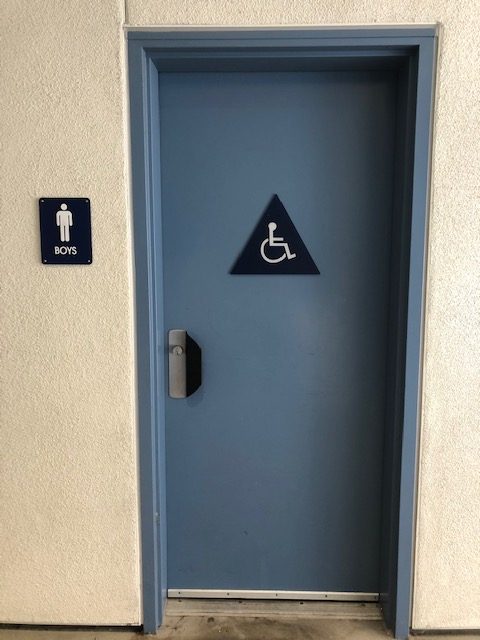 The boys bathrooms in the new building were closed last week due to vandalism and have yet to be reopened. According to head custodian Gabriel Figueroa, “There was a privacy divider between the urinals, [and the vandals] pulled it off the wall and broke some tiles.”

Figueroa estimated the cost of the damage to be “maybe around two to three hundred dollars.”

“They eventually will be fixed,” Figueroa said. “However, I don’t know when they will be open. I have to get an okay from the principal.”

“This is the first step,” said Caughey. “When we close a bathroom the point is to force students to walk to bathrooms that are a little more visible… the point isn’t to punish.”

Many students in the math and science buildings must now walk further to go to the bathroom.

“I just think it’s really kind of a minor inconvenience because you just have to walk a little bit further to get to another bathroom, and that’s it,” said sophomore who wished to be anonymous.

“…It’s really terrible, because, why would you vandalize the bathroom?” said a second
sophomore who also wished to be anonymous.

This is not the first time the boys bathrooms have been vandalized. “This is the third time they’ve vandalized the restrooms,” said Figueroa. “The first time…they [the vandals] pulled out the sinks off the walls. Two times they did that.”

There is very little administration can do to prevent future occurrences like this. “The only thing we can do is lock the restrooms…and hope that students eventually report vandalism,” Figueroa said. However, similar incidents in our school district have been resolved successfully before: “Carmel Valley is having a similar problem right now… all of the northern bathrooms are closed… they haven’t had very much vandalism since,” said Caughey.

“To all SDA students, be respectful to school property, because every time that there’s some vandalism, it’s more work for everybody,” he said.