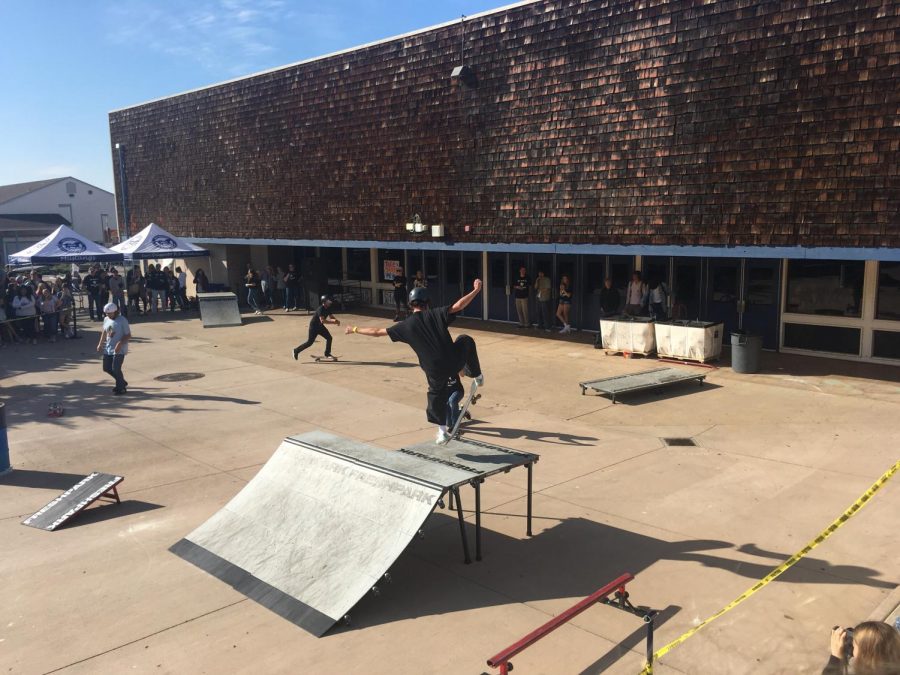 Gallery|3 Photos
Photo by Ella Alexander
Students show their stuff on one of the ramps.

San Dieguito Academy students gather near the gymnastiam to watch SDA’s annual skate demo during lunch and homeroom today. The demo was sponsored by the foundation Rollin’ From the Heart, a non-profit that provides mentorship for disadvantaged and at-risk youth through skateboarding. The event stands to honor a former SDA student, Ian “Poods” Barry, an avid skateboarder who was very passionate about improving the community around him. Barry passed away Sept. 27, 2012.

“There’s so much to like about [the skate demo]. It’s really fun because it brings all the students together. We all get to skate, which is fun,” said Piper Bingham, a junior, “It’s for ‘Rollin’ From The Heart’, which is a really great cause, and Poods. Overall, we should just do it more I think.”

The lively event featured time for skaters of all skill levels to use the ramps, rails, and other obstacles as the rest of the student population watched from the sidelines. Apart from the main event there was free shaved ice and shirt sales that contributed to the non-profit. A good number of students participated and even a few teachers joined into skate with them, one of whom was art teacher Jeremy Wright. Student and staff also had the opportunity to donate gently used skate gear and clothes.

Junior Olivia Alcantar, junior, as been planning the demos with Rollin’ for the Heart since the first event last year. “I love just involving the skaters, and even though I don’t skate, I think skating is such an awesome thing. And I love getting the Foundation out here because it is for such a good cause,” she said.