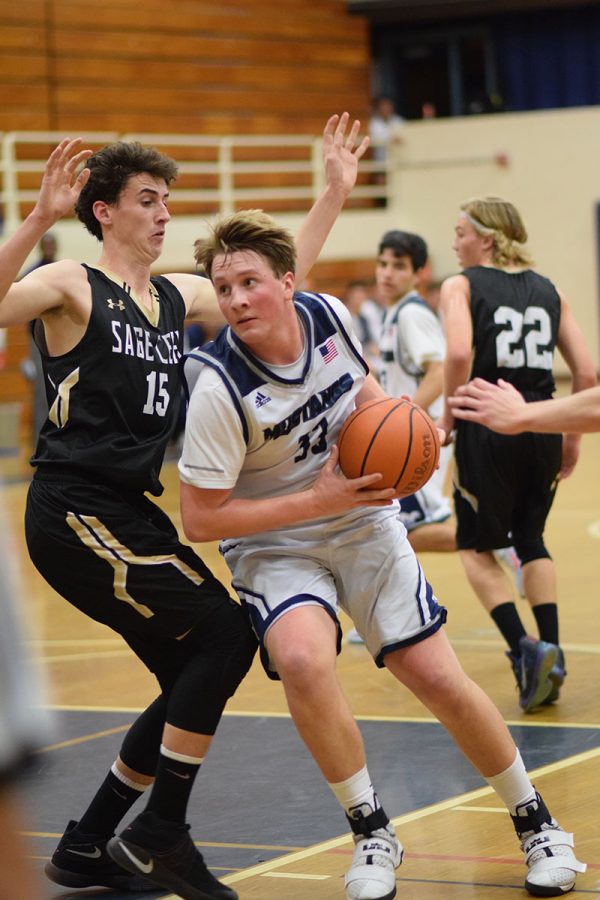 The SDA gym was packed to the brim with Mustang and Bobcat fans alike as SDA’s varsity boys basketball team prepared to face Sage Creek and defend their home territory last Friday. After the national anthem was sung by sophomore Lanie Weingarten, the crowd settled in for a close game that ultimately ended 52-57, as a win for Sage Creek.

SDA’s school spirit was firing as the student section yelled cheers while waving pom-poms and large print-out signs of the faces of the five seniors on the team.

With a blow of a whistle, SDA’s starting lineup, comprised of seniors Luke Oldham and Andrew Naimark, junior James Bert, and sophomores Yarin Arbib and Travis Snider, got ready for tip-off. The first quarter was fast-paced, with numerous fouls made on both teams. The Mustangs finished the quarter with a 15-13 lead.

Second quarter saw senior Devin Gaan helping to lead the team on the court and Naimark demonstrating fast footwork to weave in between opposing players. Sage Creek’s student crowd cheered loudly, prompting the SDA student section to fire back with cheers of their own. More fouls and falls were made, but the Mustangs shook it off, helping each other up and keeping their teammates focused. Despite their efforts, the Bobcats began gaining momentum, ending the quarter at 20-34 with Sage Creek in the lead.

Unlike usual halftime antics, the show was another basketball game, but between little boys in the Encinitas boys basketball program. The crowd got invested in the game, cheering whenever a steal or basket was made and commenting on how cute the boys were.

The two teams came back out ready to fight after their halftime meetings. Oldham was a key player, uniting and motivating the team to communicate and make smart plays. Arbib and his twin brother Ron Arbib also helped set the tone with a number of fast drives. At this point, the crowd was getting a bit rowdy, with both teams’ supporters showing some sass and mockery toward each other. SDA was able to lessen Sage Creek’s lead, ending the quarter 34-40.

As fourth quarter began, time was of the essence. Both teams played with a sense of urgency, and because of that, started playing dirtier. SDA starting gaining on Sage Creek due to a few crucial points being made by Bert, pulling the score to 39-45 at four minutes left of the game. Sage Creek showed they would not go down easily, and fought to maintain their lead. Mustang fans were all standing at these crucial moments, rooting for their team to pull through, but after a few last second points by the Bobcats, the game ended 52-57, as Sage Creek scraped through by a small margin of five points. It was a well-fought battle, Mustangs.

Boys basketball will play at LCC today at 7 p.m.