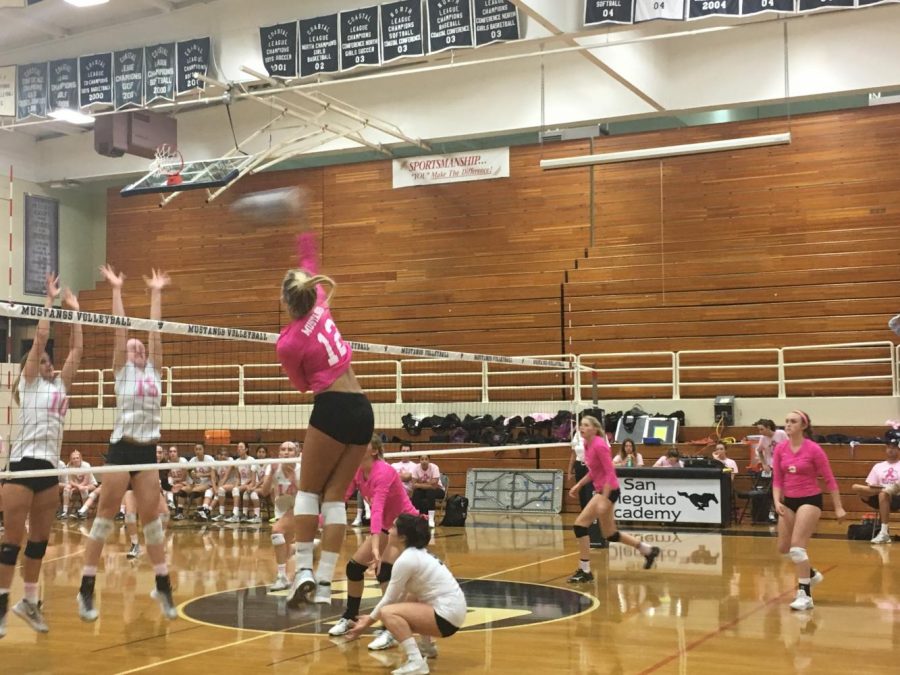 The Mustang varsity volleyball team went into Wednesday night’s Dig Pink home match eager to capture the win over Canyon Crest Academy. Although the Mustangs did not get the elusive victory, the night was not a complete loss.

This game wasn’t just about competition, but also collaboration. Both SDA and CCA teamed up to support and raise money for breast cancer during what is known as a Dig Pink volleyball game. Dig Pink is the name of the Side-Out Foundation’s national October Breast Cancer Rally that raises money for research organizations and entities dedicated to providing services for breast cancer patients.

“I felt today was one of the best games we’ve ever had,” said player of the match senior Sarah Colla who secured nine kills that night averaging 4.8 kills per set. “There was a lot of fight from everyone and everyone wanted to be on the court playing.”

After losing the first set by 16 points, the Mustangs knew they had to pick up the pace. Perseverance was evident as SDA initiated a strong 6-0 lead over the Ravens within the first couple minutes of the second set. The Ravens trailed closely behind threatening to overtake the Mustangs late in the set after tying up the score for the third time at 22 points. It was a close fight, but an unanticipated kill by sophomore Christina Bumann earned the set-winning point for the Mustangs and sparked cheers and chants from the SDA supporters.

“I think that we worked really hard, we adjusted to our plays to try and get a point over the other team and I think that’s how we beat them in one of the sets,” said senior Jordan Myrick.

The Mustangs continued to battle hard throughout the rest of the game and maintained high pressure on the Raven defense. Unfortunately, the night did end favorably for the Mustangs. CCA managed to carry out two more wins to capture a 3-1 win victory over SDA.

Throughout the match, the Mustangs delivered 33 kills, 26 digs, 3 aces, and 3 blocks as a team.

“I think it went really well,” said head coach David Savage. “We started off slow but we made some changes and came back a lot stronger. I’m just trying to get us primed and ready to get going a little bit sooner… because once we woke up we played a lot better.”

The Mustangs are back in action next Wednesday as they take on Sage Creek during an away game.