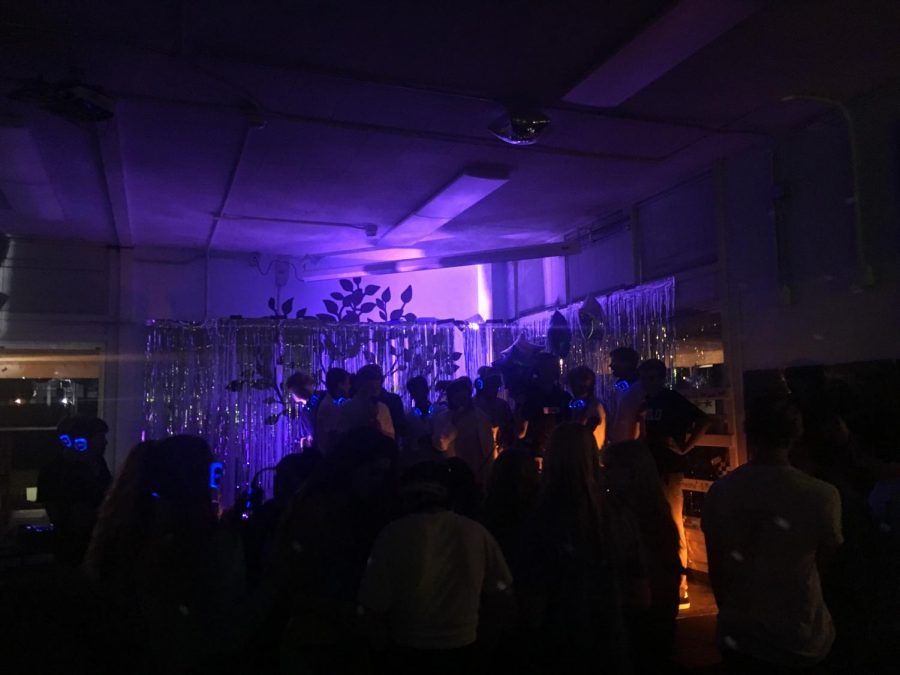 Missed Homecoming? Find out what happened.

1,100 students attended the 80s themed Homecoming Dance Friday. Spanning from the Mosaic Cafe to the gym and to the courtyard of the math and science building, there were many activities this year. Students could enjoy a silent disco, karaoke with their friends, a laser maze, a game truck, churros, an ice cream truck, a dance floor and a couple photo booths.

The karaoke activity in the Mosaic proved to be a huge success. “A whole bunch of my friends got up and sang Bohemian Rhapsody karaoke while at least 10 people came and sang along with us,” said junior Phebe Bridges. Also in the Mosaic was a silent disco. This feature is always a hit at dances because you have the ability to choose between three different radios to dance along with your friends.

In the area in front of the gym, a laser maze truck and large game truck featuring Mario Kart, Mario Party and, to the disappointment of many, no Fortnite, were parked adjacent to each other. Throughout the duration of the dance, the game trucks proved to be very popular as students formed long lines to get in.

“The theme was really well incorporated, in both the decorations and the music. The DJ had mixed in both currently popular songs and songs that were popular in the 80’s so that it was fun for everyone to dance to. The outfits everyone wore really added to it. It was super fun to see everyone in bright outfits and colorful makeup,” said Bridges.

Students enjoyed the large variety at the ice cream truck, grabbing ridiculous amounts of popsicles and only succeeding in eating half before being dragged back out into the dance area by their friends. Many students also mentioned how they appreciated the idea of a churro stand, giving the food selection an interesting twist.

“The mosh pit was dysfunctional,” one student complained, describing their experience of being jarred around and knocked over unnecessarily, along with others commenting that the dance area was too small. However, many students also praised this year’s dance for being a major improvement from the last Homecoming’s very sweaty, claustrophobia-inducing location: the gym. “I thought it was much better than last years!” said sophomore Ellery Bolton. “Did you see the condensation on the windows last year? Ew.”

“From being in an oven-like gym to outside was a nice change and it felt like there was a lot more to do than last year,” said senior Carlos Murrieta. “Like there was more space and more food and entertainment, which I loved.”

A majority of students were in favor of the new location in the open-air courtyard of the math and science building, appreciating the fact that there was plenty of room to spread out. Still, most of the students were concentrated in the dance floor area, fighting for the opportunity to jump onto one of the glowing pedestals and show off their fishnets, leotards, fanny packs, leg warmers, scrunchies and glitter paint.

Eventually, the students in the center of the dance floor grew out of control and began messing with the glittering disco ball suspended over the area, attracted to it like möths.

Among the neon colored outfits, a trio of senior girls dressed in full 1880s attire stepped through the glittery blue rain curtain marking the entrance, clutching their large, white hoop skirts and parasols. Students were clearly impressed by their bold take on the theme, jaws literally dropping as they made their grand entrance, fashionably late.

Students also said the photo booth with the silver glitter background had great lighting while the 80s themed backdrop had “weirdly orange lighting.”

“All together it was a really fun dance,” said Murrieta. “I will definitely never forget my senior homecoming.”