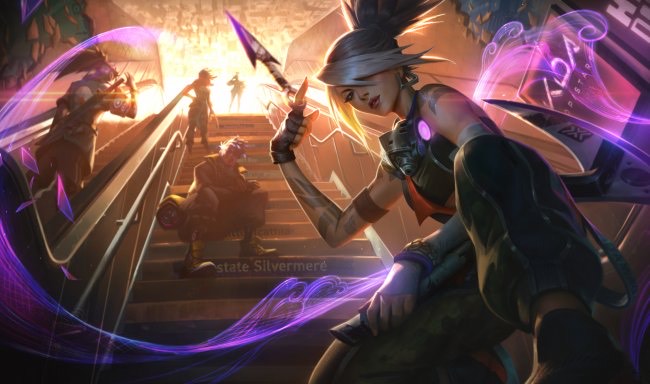 After the success of virtual K-pop group K/DA, Riot Games created a new, incredibly unique band for this year’s League of Legends (LOL) World Championships. Bringing together the talents of K/DA and (G)I-DLE’s Soyeon (Akali), Becky G (Qiyana), Keke Palmer (Senna), THUTMOSE (Ekko), and Duckwrth (Ekko), Riot presented supergroup True Damage to the public on Nov. 10 during the opening ceremony of the tournament. The artists debuted their first single, “Giants,” on stage, performing alongside holographic figures of their actual LOL characters.

The performance was well-received. However, “POP/STARS” (K/DA’s official song from 2018) did significantly better on the charts. It was a massive hit immediately after the 2018 World Championships, and currently sits with 279 million views on Youtube and 105 million streams on Spotify. Giants racked up 350 thousand views within the first few hours, but that momentum sputtered out within a week.

The opening ceremony performance was lacking in many areas, such as the dance routine, camera-work, and overall hype. The presentation of “POP/STARS” heavily revolved around the dancing, and compared to it, True Damage’s performance delivered a weak routine with little enthusiasm. The camera-work was so poor that many of the actual moves weren’t even shown, and the group as a whole did not hype up the audience in any way, leaving them with an unsatisfactory feeling.

Unlike KD/A, True Damage does not look like a cohesive group on stage, but rather four individual artists. This absence of unity in the group’s look and sound made the performance less powerful. Also, the fact that all of the artists unconvincingly lip-synced every lyric (except for Duckwrth and THUTMOSE) was underwhelming.

However, the actual song and music video are high-quality, and most fans consider “Giants” a bop. Some argue that because the song incorporates multiple genres, each verse feels like a different song. However, for working with so many different styles and musical variations, Riot did a fairly good job at making them flow together by using the main chorus to tie and connect the different rap-styles, producing an overall smooth track. Ekko’s verse in particular stood out from the others, because the sound team used a reverse effect on his verse, giving it a distinctive sound fitting for his character, who can reverse time.

In the official music video, Ekko’s second verse also had a unique animation-style similar to that of “Into the Spiderverse”. In fact, the entire music video did a good job of portraying the different artists as one cohesive unit, even with the

The skins for the champions (LOL characters) are also well-done, as they are designed by French fashion company Louis Vuitton. Using an actual brand to create skins is an outstanding market strategy, and the outcome was absolutely stunning. The new skins are extremely popular, and sales are going through the roof.

Disregarding their poor opening-ceremony performance, Riot Games did a phenomenal job with the debut of True Damage through the production of a high-quality song, a unique music video, and elite skins. Although “Giants” wasn’t as successful as “POP/STARS,” the new band’s collaboration with a giant brand was a huge step in the right direction. Going forward, Riot should focus more on a quality debut performance, in order to draw more fans in and get them excited about the champions.