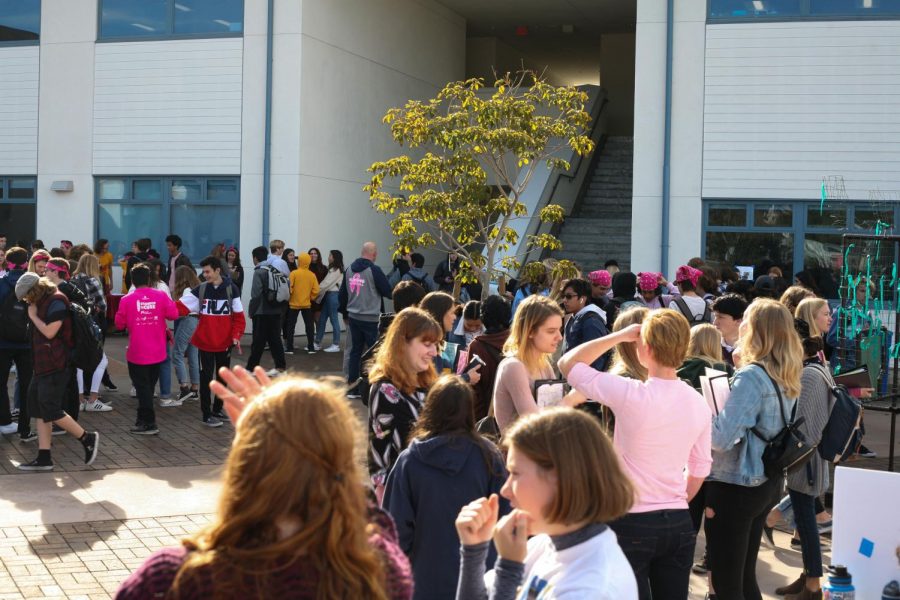 Gallery|9 Photos
Photo by Devlin Ott
Students got a chance to sign up for clubs they may have missed during first semester.

A fairly great time at the Club Fair

Flyers fluttered in the air, attempting to catch the attention of students dancing to 80’s music and chatting about new classes at the club fair.

Students visited the fair during homeroom at the courtyard of the math and science building. Student-run clubs had the opportunity to promote and encourage others to join.

Alexa Mendes, sophomore, said she “loved that everyone can explore their different passions and meet new people.”

“Clubs seem like a great way to meet new friends that are interested in the same stuff as you,” Kate Glancy, freshman, added.

Hanna Waite, freshman, shared that one of her favorite clubs was Stang Gang. “It is fun to cheer people on [and] go to different games,” she said.

Freshman Steven Veld represented the Creative Writing Club, explaining that “we talk about different writing prompts to spark our creativity.” Since joining the club, he thought that “[it] stood out to me that you could actually be with other writers and improve upon each other’s work.”

Team Paradox 2102, the robotics team, also participated. Outreach President, David Salzmann, junior, said the team gives anyone interested “[the] experience in engineering, marketing, operations and useful skills like photography and editing” and “if [someone] has kind of an idea of what you might want to do in [college] it is a great place to experiment.”

Senior Taylor Thompson worked to popularize the Big Sister Club. “I think it is important for a high school to have the lower and upperclassmen somewhat bonded,” Thompson said. “It can be hard as a lowerclassmen to make friends, especially surrounded by a bigger and older crowd. It is very intimidating.”

Thompson’s motivation to joining the club came from a similar experience: “I moved to San Diego in 8th grade from Arizona and I had trouble making friends. It was very intimating to be around strangers at school. So, I wanted to help people feel more comfortable with the dramatic middle to high school change.”

Junior Phebe Bridges represented the ASL Club at the club fair. She said “it’s a great way to connect with the ASL community. It’s like a little family on campus and everybody is super close. We’ve done a secret santa type thing, we do potlucks all the time, it’s just really fun.”

ASL comes in handy “if there are any deaf events in the community or if there is anything around campus. We also [sign] the national anthem,” Bridges said.

SDA Threads was at the fair as well. Lena Hoover, senior, said she believes “it’s really important to retain your individuality but it’s also really nice to branch out and meet a bunch of new people and create new styles and things like that.” She noted that anyone can express their creativity by contributing to SDA Thread’s magazine and social media.

“We have all noticed that SDA kind of lost its funk a little bit and I feel like it’s important to stay true to yourself and we want to bring that vibe back,” Hoover said.