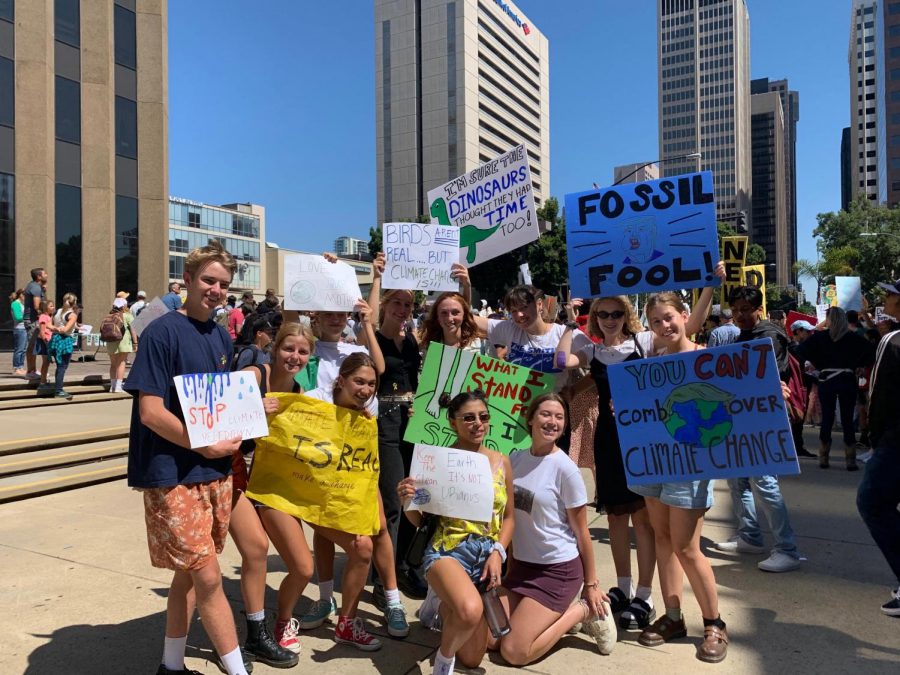 Students across campus gathered to advocate for action against climate change on the Performing Arts Center stage today during first period. The walk-out protest, organized by senior Georgia Goldsmith, was intended to be part of the Global Climate Strike event, which is a worldwide protest primarily driven by students and young people. The walk-out began at 9 a.m. and lasted around 20 minutes.

At the event, Goldsmith gave a speech with statistics about plastic companies and urged the students to help by avoiding fast fashion brands, or fashion production companies that produce a large amount of cheap clothing, and watching their dietary choices.

“Plastic companies are planning on increasing their plastic production by 40 percent by 2050, and…if we don’t do anything about that they’re not going to stop,” she said. “Contact your policy makers, make sure that this happens.”

This movement was not exclusive to San Dieguito Academy. All morning across San Diego, students have been walking out of class in solidarity. Official protests will be occurring later today in Mission Bay, Escondido, and at City Hall. The strike was to be the largest climate change demonstration by students in the history of San Diego, according to environmentalist group San Diego 350.

These protests in San Diego are in turn part of the Global Climate Strike, a primarily student driven event inspired by 16-year-old climate change activist Greta Thunberg, which is expected to occur in 150 countries and consist of over 2000 organized strikes in addition to individual protests.

Goldsmith said she had been working with school administration for several weeks to organize the walk-out but it never panned out.

“The whole San Diego [Unified] School District was supporting their students in walking out…so [our administration not endorsing the walk-out] was a little confusing and a little frustrating for me,” Goldsmith said. Instead, she decided to act on her own and posted an Instagram story the night before informing her followers that she was going to walk out the following day.

“I felt really weird not doing anything on such an important day like this, because it’s something I care deeply about,” Goldsmith said. “If we don’t fix it, we’re not going to be here anymore.”