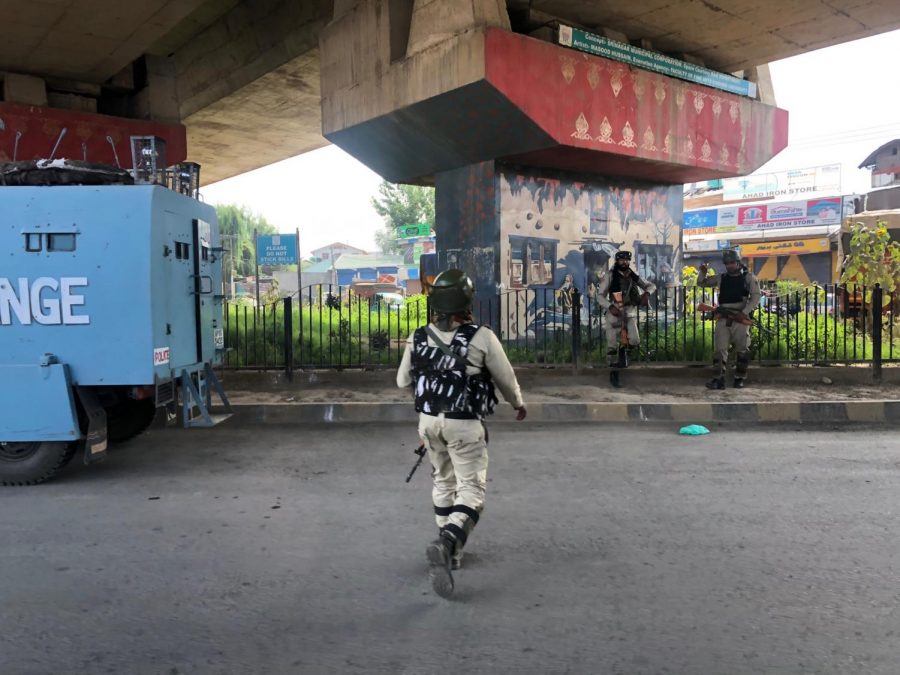 How I spent my summer vacation under military occupation 7,000 miles from home

For 72 years Kashmir has been under Indian military occupation, and is regarded as the most militarized region on Earth. I visited Kashmir for the first time this summer, and was there during the most politically aggressive period in its history to date.

I grew up listening to stories about Kashmir from my parents. I’d hear the usual, obnoxious, “When I was your age,” but from those stories, I learned about my unique Kashmiri heritage. Both my parents are from Kashmir, and I am a first-generation Kashmiri-American. My parents would describe the little things: the local butter brand they would spread on thin flattened bread for breakfast, the clay pot filled with small coals kept underneath the Kashmiri robe during the winter times, and the vivid hue of the saffron flower. They would also tell tales of their longing for freedom from the oppression they faced. I would hear of the brutality carried out by the Indian government to the Kashmiri people. I would hear of the innocent killings, and I would always hear the trauma in my parents’ voices. Alongside them, I would yearn for azaadi (freedom), but I never truly understood the weight of that word until I went there myself.

This summer break, we went to visit Kashmir for the first time as a family. It would be my mother’s first time back to her homeland in almost ten years. We were never expecting what happened in August — it was supposed to be a normal summer vacation, but I was there when India launched the most politically aggressive action against Kashmiris to date.

I landed in the Srinagar Airport on Aug. 3. The first thing I noticed was the staggering amount of Indian troops, all carrying large guns. There were signs informing us that we were prohibited to take photos, and I did not want to find out what would happen if I did. What stuck out the most to me were the booths that read “No query. Keep Distance,” and inside sat an Indian Central Reserve Police Force member, flashing his gun. This was all fear mongering, and I was falling for it.

On the drive from the airport, large propaganda signs claimed the Indian Army was here to protect us. Right beside it lay an image of a Hindu God, as if to compare themselves to divine deities. Even outside the airport, there were so many troops littering the streets, standing there, hands on their guns. I knew Kashmir was under Indian militarization, but this was way worse than I had ever imagined; I could almost feel them staring at the back of my head.

Here’s the thing to know about Kashmir: this is normal everyday life. If you have never heard of Kashmir, it is a disputed region to the North of India. To understand the situation, know that India thinks it is theirs, and Kashmiris are people in their own country. What was to come two days later would be even worse than the occupation that I was seeing for the first time now.

When we entered my aunt’s neighborhood, there were three army men stationed there, watching us with malice in their eyes. It was suffocating, as if there was a stranger in your own home. During my first days there, I heard that India had sent an additional 30,000 troops, told all foreign tourists to leave, and placed Kashmir’s political leaders under house arrest.

Rumors began to spread throughout the valley. We knew they were planning something big, and they were trying to keep it hidden from outsiders. On Aug. 5, it was announced that the entirety of Kashmir would be placed under a strict 24-hour curfew.

Overnight, my beloved iPhone became useless. No one could make phone calls. Televisions broadcasted no news. India had blacked out thousands of people who had just learned their lives would change forever. All information crept in slowly as the world outside watched freedom in Kashmir implode.

Later we were informed that India had abolished Article 370 and 35a, which gave Kashmir its autonomy. For decades, Article 370 gave Kashmir a special status within the Indian system, and kept our land from being taken. Now, Narendra Modi, the prime minister of India, a “democratic”country, has direct control over Kashmir. Modi is a part of the Bharatiya Janata Party, which essentially is a Hindu nationalist party that has a disturbing history with religious and ethnic minorities. Kashmir is the only Muslim majority part of the country. I am sure you can see the problem here.

I spent twenty days inside Indian-ocuppied Kashmir without any communication to the outside world. No phone, neither cell or landline. No internet. Barely any TV or radio. At some point you start to feel as if you are a prisoner, cut off from the world, surrounded by an invading army. Even though the situation was horrific, I was lucky. My aunt’s house is one mile from the airport, and since it’s a military-run facility, the immediate area was more relaxed than the rest of the disputed territory. We were able to walk around, but not in groups bigger than four. That was considered illegal.

Other places were not so lucky. Just walking outside would mean potentially getting beaten, arrested, or killed. I would hear some of my relatives speaking of night raids, where Indian forces in the cover of the night have been breaking into homes and arresting the youth. They would take them away from wailing mothers. To where? Not many know. Imagine the horror. Their crime? Rebel affiliation, supposedly.

Is this the democracy that Modi has been preaching about?

Kashmir has been ravaged with violence for centuries, and the scent of gunpowder lingers in even the most rural of villages. The youth have seen horrors that most people will never face in our part of the world. It’s like living in the middle of a warzone; the topic of bloodshed is always on the tongue. We choose to keep a blind eye here, while children in Kashmir have been blinded by force. Mothers clutch their children’s pictures at night, their sobs filling the air, wondering if they will ever see them again. How can we let such monstrosities continue like this? How can we just sit by and do nothing, while every day the Indian Army is tearing families apart?

The Indian media keeps on pressing the false narrative that everything is normal in the Kashmir valley. But there is absolutely nothing normal about the situation. I was there. All I ask of you is just to imagine this happening to you:

Getting shot while defending your town?

We call that patriotism in America.

Turning off the internet?

We call that a breach of free speech in America.

We call that a breach of human rights in America.

If all of this were happening in America, we would be appalled. Why is it okay to let it happen there? Why is any of this considered normal, acceptable or even excusable? By continuing to ignore the situation, it is condoning ethic cleansing in slow motion, blatant Islamophobia, and war crimes. I may have been able to leave, but eight million Kashmiris are still suffering under Indian rule. This is why it is essential to stand with Kashmir right now, and give a voice to the voiceless. You don’t have to be Kashmiri or Muslim to support Kashmir, you just have to be human.

I don’t know if I will ever be the same after this trip. After this summer, I realized I never truly understood what azaadi, what freedom meant, until I saw it taken away from millions. I saw freedom that has been out of grasp from Kashmiri hands for hundreds of years. And still, it just got worse. That one word has so much power and meaning behind it for me now. So much so, that I know I can never fully understand their pain, but at least now I can stand with my Kashmiri brothers and sisters and fight for azaadi.

8 Responses to “How I spent my summer vacation under military occupation 7,000 miles from home”