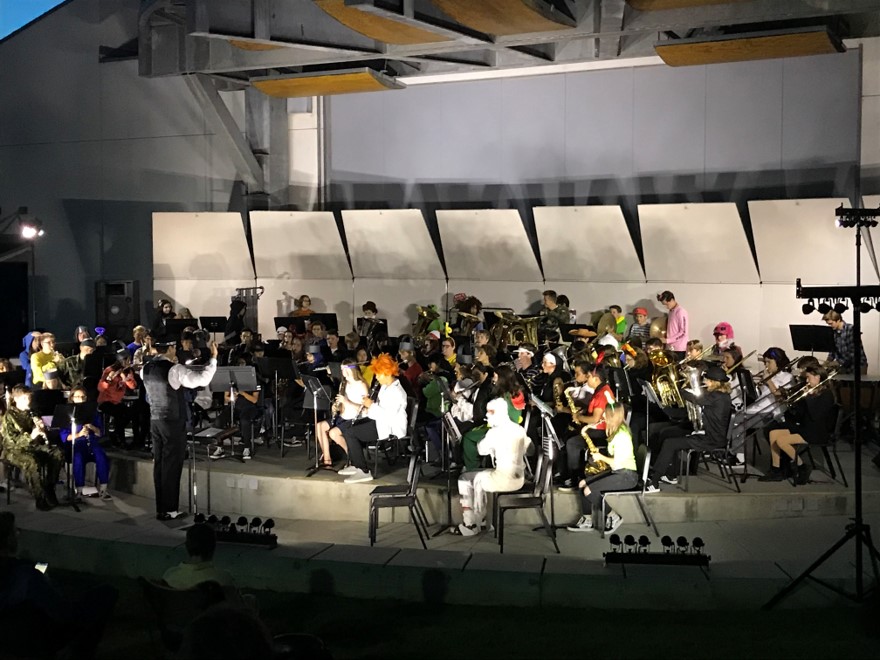 Gallery|3 Photos
Photo by Victoria Lee
Winds I and II join together to perform a Phantom of the Opera Medley on Day 1.

The SDA band’s unique Halloween concert was ‘A Major’ hit

The two nights preceding Halloween this year were filled with music produced by our SDA band in their annual fall concert. While traditionally the band has played their fall program in a one-night show inside the gym, Band Director Jeremy Wuertz said he wanted to try something new this year, “In order to accommodate all of the guests, we needed a total seating capacity of around 400 or greater… and I wanted to try something different on Halloween. There was just something alluring about renting lights and doing it outside in costume and trying something different.”

The first night, Oct. 29th, was held outside at the PAC. Guests sat on blankets surrounding the stage dressed in Halloween costumes as the band performed songs fit for the occasion. Regarding the unique venue, Wuertz said, “The romance of being outside with guests being able to eat popcorn and drink hot chocolate on blankets in Southern California with beautiful weather is special.”

Wind II kicked the event off by playing “March to the Scaffold”, “Music for a Darkened Theatre”, and “The Witching Hour”, followed by Wind I performing “March of the Trolls”, “Shadow Waltzes”, and “Goddess of Fire”. After a brief intermission, Winds I and II finished the night off by performing a “Phantom of the Opera” medley together. Wuertz even dressed up for the song by wearing the Phantom’s iconic mask and cape.

Because of the temperature outside, the students had to be wary of the pitch of their instrument. Wuertz said, “We knew pitch was going to be a challenge because it goes flat in the cold, but there wasn’t a bunch of wind that night, so we didn’t have a wind-chill, and the air was still so that helped.” Despite this extra challenge, the students performed well and completed their program successfully in the outside venue.

The next day, band students excitedly prepared for the second and final show in the theater. Junior Alyssa Blankenship, a Wind I euphonium player, said, “We’ve been preparing for this for about a month and a half at the same time as pep band.” The students worked long and hard to prepare for this concert, and it paid off as the second night smoothly came to a close.

At the end of the second night, math teacher and trumpet player Steve Dale surprised the band and joined them for the “Phantom of the Opera”. Dale said, “[Wuertz] came and asked me if I could play with them and I said sure. Some of the students playing tonight are actually in my classes, which is cool.”

During both concerts, the “Phantom of the Opera” was a big hit. When asked what his favorite piece was, Wuertz said, “I enjoyed them all; there’s seldom a piece that I program that I can’t spend a lot of time getting to know. I think maybe Phantom of the Opera because all the students are playing together.”

Dale also had a similar response: “You can’t go wrong with ‘Phantom of the Opera’; it’s a classic for sure. They had a really nice program with a lot of modern pieces with some really cool harmonies, and I always enjoy that kind of stuff.”

After the success of their Fall Concert, band students immediately began preparing for their next event. Winds I and II are currently practicing to perform as a marching band in the Encinitas Holiday Parade, which is on December 7th, and said they would be delighted to have SDA students attend to support them.