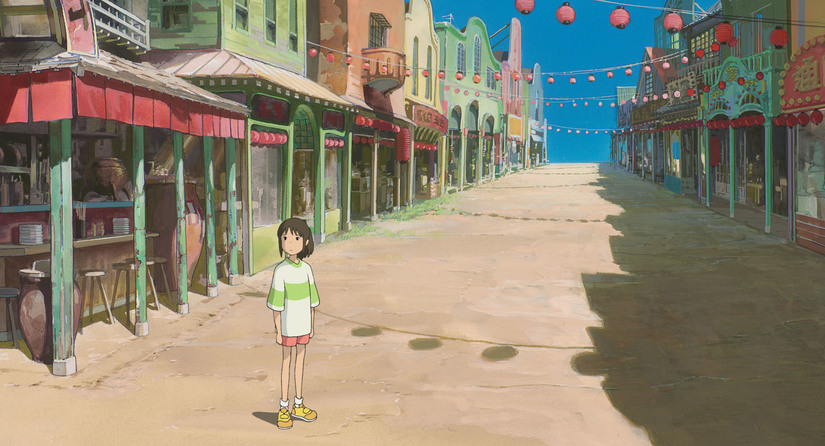 Spirited Away is a great coming of age movie.

Spirited Away is a masterpiece, as are most of Miyazaki’s movies. Miyazaki often focuses on a young woman’s potential to be independent and strong. Spirited Away is a beautiful rendition of this theme. Chihiro, a young girl, must navigate the spirit world in order to save her parents. In the beginning of the movie Chihiro is whiny and somewhat of a brat. As the story continues, she learns to use her fear as a tool instead of a helpless emotion. She grows incredibly strong and independent  because of her challenging journey in the spirit world which helps save the ones around her. Miyazaki illustrates how coming of age stories should not be limited to real life. Through incredible imagery, he uses the realm of spirits to symbolize the courage and growth of a young woman.

The heartbreaking and utterly relentless movie City of God, depicts the corrupt, beastly nature of slum gangs in Rio De Janeiro. The movie takes place in the late 1960s through the 1980s and tells the story of a grim housing project for the poor. Tracking the story of two adolescent boys: Rocket, a would-be photographer and Li’l Dice, a passionate gang member. The “survival of the fittest” ideology perfectly describes the nature of these slums in which the only way to escape the drudgery is to live a life of crime. Directors Fernando Meirelles and Kátia Lund depict the ugly truth of what it is like to survive in environments such as these. This film unapologetically reveals the shocking experiences of the youth in Brazil.

Hunt for the Wilder People

Hunt for the Wilder People is a charming coming of age story comedy about Ricky, a soon to be teen, taken in by foster parents: Auntie Bella and Uncle Heck. In contrast to reserved Uncle Heck, who is unbothered by Rick’s entrance into the family, Auntie Bella embodies the cliche of an overbearing, comforting mother. However, when the disobedient tween ventures into the New Zealand wilderness, Uncle Heck is the first to find him. The story tells of the unique companionship betweenRick and Uncle Heck,who have a lot more in common than at first glance. Hunt for the Wilder People does not limit the characters by their suffering and takes an expansive and hilarious view on human growth.

Boyz N The Hood is a gritty, realistic coming of age drama about three boys,Tre, Ricky and Doughboy, living in South Central Los Angeles. All three of these boys have  unique, grand aspirations but these dreams are jeopardized by the  violent environment that is their home. Tre seems ready for college, Ricky is a football star with his pick of schools, and Doughboy is a drug dealer who lives in and out of Juvie. All is well until a rival gang chases down Tre and Ricky. The director John Singleton’s desire to bring this story to the screen is evident through his raw depiction of what it is like to live in the “hood”.

Persepolis is an autobiographical animation of a young girl, Marjane Satrapi, growing up in Iran during the 70s. Through the lens of a young girl, this story is brutally honest and captures the intensely unjust politics of Iran. Satrapi is outspoken and unapologetic, which is noticed by her family and becomes a concern for the safety of the young girl. Eventually, her parents decide it would be best to send her to school in Vienna, where her rebellious tendencies are enhanced by the european punk culture. This movie is surprisingly relatable and beautifully told, Satrapi uses stylistic animation to embrace her writing and reveals her story honorably.

Nearing the end of highschool, LadyBird begins to deepen her understanding of home life. Director Greta Gerwig incorporates some cliche highschool milestones, like a first boyfriend, the prom and parties with the popular kids. However, through this we see LadyBirds flawed relationships with her mother, father and close friend Julie. LadyBird’s mother, a working class woman, stubborn and traditional, has trouble finding common ground with Ladybird who is equally stubborn yet eccentric and wild. The relationships she forms throughout the story begin to define her and ultimately raise questions to who she wants to become.  Gerwig explores the effect a person’s origin or home, and flawed, human relationships have on individuality, through the story of a young woman looking for and beginning to find herself.

Stand By Me, inspired by Stephen King’s “The Body”, is a brutal coming of age story. our young boys,Gordie, Chris, Teddy and Vern searching for a missing boy,rumored to be lost or even dead in the forest. This movie deals with dark subjects such as death, abuse and neglect but through the perspective of young boys with an innocent outlook on life.While the boys are on their journey, they realize that life isn’t as sheltered as it once seemed and begin to understand that it is in fact complicated, and the future holds many decisions as to what kind of people they will become.

Focusing on skate culture, Mid90s offers an authentic view into adolescence. Thirteen year old Stevie becomes fascinated with skateboarding as a way to escape home life and make cool new friends. Soon he joins a group of skaters and begins to see the world with less innocence. Embedded in each skater are their individual struggles, whether a hostile homelife, drug abuse or social injustices. Director Jonah Hill does a beautiful job capturing the nostalgia of the Mid 1990s while depicting skate culture with more empathy and seriousness than ever before.