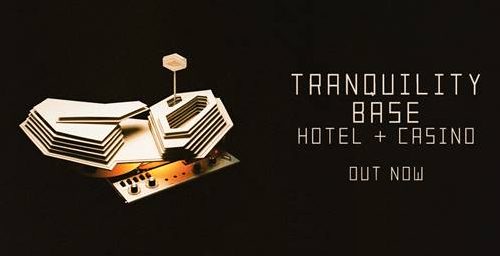 The band’s new album, “Tranquility Base Hotel and Casino,” was released May 11, nearly five years after “Do I Wanna Know?” propelled them firmly into the American mainstream. It’s not the late-night martini that “AM” embodied, nor is it the spunky narratives of young adulthood that dominated their earlier tracks. Instead, it’s a spacey venture into a new realm for the veteran group — the information age.

Though the concept of frustration with technology is not new, and the paradoxically Internet-made and low-tech Arctic Monkeys perhaps aren’t saying anything revolutionary, they still manage to prove their mastery of pleasantly sophisticated lyrics and writing more allusions than anyone ever asked for in a rock song.

Some of the tracks are sleepy, and none seem to have the potential for catchiness found in “R U Mine” and the band’s other radio hits. Following in the footsteps of frontman Alex Turner’s other band The Last Shadow Puppets, who released an album in 2016, the powerful percussion and guitar moments that were staples of the Monkeys’ earlier albums are absent from this one. This may come as a slight disappointment to former diehard kid fans like me — I bought my first pair of black jeans shortly after listening to “AM” in eighth grade, and was not similarly inspired streaming “Tranquility Base.”

But that seems to be an unavoidable feature of the ever-changing Arctic Monkeys. Their 2006 punk fans complained tirelessly on the Internet for a decade about the band’s changing sound, and probably nothing could have lived up to the literal millions of #arcticmonkeys posts reblogged by Gen Z kids on Tumblr.

Definite highlights: “Science Fiction,” which was probably the most self-aware track the band has written yet (“I want to make a simple point about peace and love / But in a sexy way where it’s not obvious” is pretty much the goal of every Arctic Monkeys song); and “Four Out of Five,” which was the perfect combination of the smooth sound of the 2016 TLSP album, the sass of AM and a little bit of social commentary.

All things considered, I waited five years to write this review and I’m just happy I got the chance. With all of high school between the release of this album and the last one for me, I’ve changed a lot, so it’s only fair that my old favorite band got that chance as well. Was it for the better? In both cases, I’m probably too emotionally invested to decide.