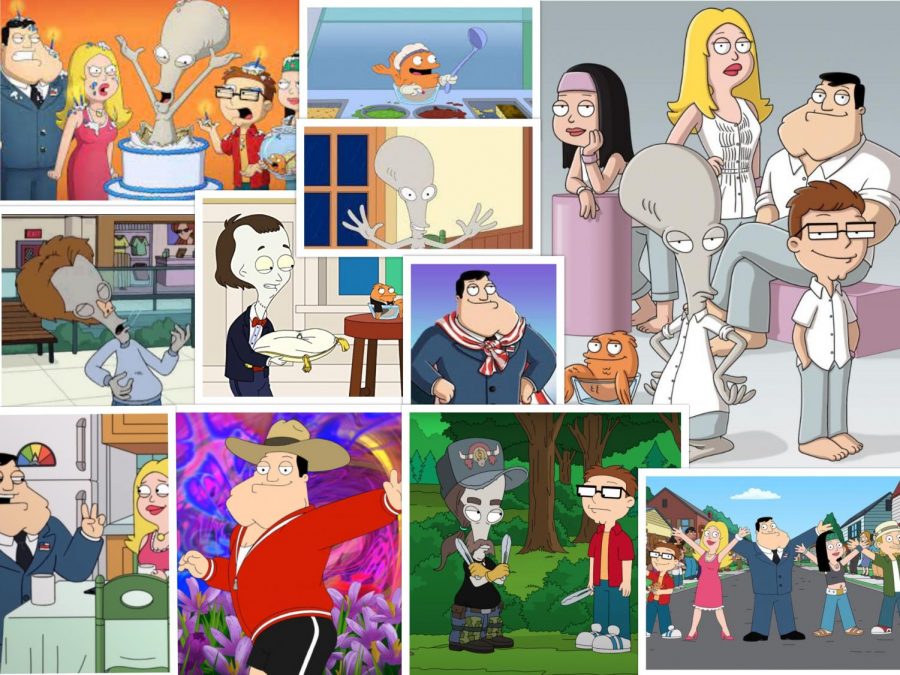 “American Dad” still has a lot to teach us about life

On Feb. 6, 2005, the animated sitcom “American Dad” premiered on TBS, also known as the number one comedy channel. The sitcom is written by Seth McFarland, who also voices the main character, Stan Smith. McFarland continues to keep “American Dad” on the air for so long through producing timeless catchphrases and keeping up with pop culture.

“American Dad” follows a “normal family” and their whereabouts while living in suburbia. Stan, a CIA agent, has a housewife named Francine and two children: a liberal daughter named Hayley, and Steve, an awkward, nerdy teenager. Two supporting characters who live with the Smiths are Klaus, a goldfish with the brain of a German ski jumper, and Roger, a gender-fluid alien who escaped from Area 51.

The witty jokes and sly commentary Roger and Klaus bring to the show are the most memorable. Roger and Klaus are debatably the best characters because of their ludicrous rivalry. Roger despises Klaus and actively makes him feel as if the family hates him. Roger is often saying things like, “You can’t participate, Klaus. I hate you.” which reiterates his anger and spite towards Klaus. This is both relatable and funny because almost every family has had to deal with a form of sibling rivalry.

Throughout the years, “American Dad” has kept an outstanding number of its viewers, over 18 million to be exact. According to Rotten Tomatoes, “American Dad” has kept incredibly high ratings throughout all sixteen seasons.  This has shaped the television industry by making animated adult shows more popular. Before “American Dad,” “The Simpsons” was the only cartoon that was extremely popular amongst adults. Once the first episode of “American Dad” aired, it paved the way for a surge of new animated sitcoms such as “The Cleveland Show” and “Bob’s Burgers.”

“American Dad” also brings up many real-world problems, such as global warming and the need to appreciate family. Hayley also expresses herself through her liberal opinions that have differing perspectives from family members, such as Stan’s more conservative views that are valuable in creating a diverse family dynamic.

Another problem addressed is how some women, like Francine, feel trapped in their traditional domestic roles. They feel confined by their monotonous lives and grueling routines, which include cooking breakfast for the family, cleaning the house, doing chores, going to the grocery store, and cooking dinner, and then repeating it all over again. An episode called “Not Particularly Desperate Housewives” was dedicated to how Francine wanted to escape her routine and be spontaneous once in a while by joining a club of fellow housewives.

A more recent episode, “Who Smarted,” which was released on April 19, 2021,  featured Hayley and her boyfriend Jeff’s relationship. The episode reiterated that we fall in love with people not for their intelligence but for their personalities and what makes them incredibly unique. This teaches viewers to be focused on what their partners do have instead of what they don’t and loving them for their many flaws.

Not many animated comedies have much substance or can teach us how to be ourselves, but “American Dad” does that so perfectly with its humor and characters.  “American Dad” is the epitome of well-written animated adult cartoons. It incorporates real-world issues in every episode while making it both funny and relatable. The show keeps up with current culture and evolves as the years progress, making it one of the most classic cartoons on the air today. “American Dad” is a must-watch for teens and young adults alike.