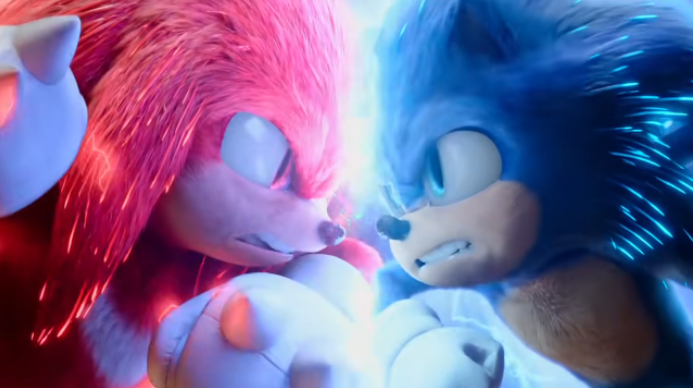 Sonic battles it out in the new movie.

Anticipation is high for the next Sonic movie

The “Sonic the Hedgehog: 2” movie is getting closer everyday, making fans of the games, the TV shows or prior movies extremely excited. The movie seems to be a continuation of the first “Sonic the Hedgehog” movie, released in 2020, only with new characters. People are very excited to see characters such as Tails and Knuckles in this new movie, both staples in the Sonic franchise.

The 2020 film did very well in box office sales and grossed around 300 million dollars,  which did not disappoint with a budget of around $90 million. The visuals with “Sonic the Hedgehog: 2” look very promising, and the style of the characters translates well into the film. The movie was confirmed for development as early as May 2020, which was before the first film “Sonic the Hedgehog” was even released! Just recently, the final trailer for the movie was released on April 8. 2022. It’s hard to go anywhere without at least hearing about the film considering how popular it is. Many people are eager to see the film, hopefully helping with sales and becoming a blockbuster hit among many. Brian Shea at Gameinformer.com has said “Sonic the Hedgehog 2 retains the heart that makes the first film so well-liked. Sonic remains energetic and endearing.”

Media outlets around the world have very positive things to say about the film, which really puts it in the spotlight and helps it stand out from other films set to release around the same time. It is good to see fan-favorite characters appear on the big screen and be animated so well. The film also brings back the unforgettable actor Jim Carrey, who played Doctor Eggman in “Sonic the Hedgehog” and is set to return to the role with “Sonic the Hedgehog: 2”. Justin Lowe at hollywoodreporter.com mentioned “Director Jeff Fowler, returning for the sequel, mines his enthusiasm for the Sonic games, but mostly resists any misguided inclination to mimic the franchise’s famously manic gameplay — with the exception of a few satisfying matchups between Sonic and Knuckles or Dr. Robotnik and his menacing drone army.”

The movie came out around at the perfect time. Right once spring break was in session for San Dieguito Academy, the movie hit theaters. It’s really exciting seeing the creative path that the producers and directors took to put together another timeless classic in the cinema world. The time that they took to create this film is very remarkable with only creating it in about two years. It shows how passionate the creators are in putting together a piece that our new generation will remember for their entire lives.

The visuals and the animation with the characters are absolutely stunning- from what we have seen so far, it looks very promising. With all the trailers and all the hype surrounding the movie, it is most likely  that “Sonic the Hedgehog: 2” will be a smashing hit across the globe. The creators seem to be very passionate about this project and are willing to take the measures to make sure that this film will be memorable. “Sonic the Hedgehog: 2” will be entertainment for everyone. Whether you are seeing it with your family or if you are a die hard fan of the franchise, this movie will be fun and enjoyable for everyone, everywhere. The movie has been very well received by fans and families all across the globe and can be easily called a hit among fans.