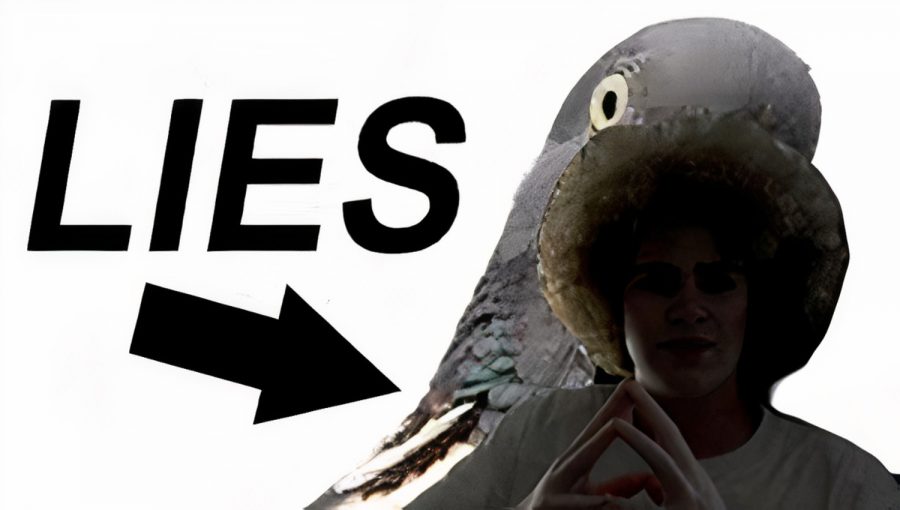 Over my two years of investigative journalism work, I’ve gotten wrapped up in some pretty intricate conspiracies. Unfortunately, getting involved with shady organizations, dirty money, and unsavory individuals is just a part of the job. So, when I got a message from an anonymous SDA source looking to share some information with me, I thought I was prepared for whatever could come my way. I was not. This conspiracy is the one to rule them all—the mother lode. Prepare yourself to have your world flipped on its head as I expose the eagle-eyed spies that keep tabs on your every move. Or should I say… pigeon-eyed.

The light was dim, and the air was musty and still as I cracked open my school-issued Chromebook one Saturday evening. I typed away on the keyboard and prepared for the interview with my anonymous source. As I practiced my steely detective gaze (the one that all investigative reporters worth their salt are supposed to have) in the reflection on my computer screen, an uneasy feeling came over me. Something was… off. I looked around my room: pens, markers, desk light, stapler… desk light. I had forgotten to turn it on. After plugging it in, everything was ready. I eyed the “Join Meeting” button and clicked.

The anonymous SDA informant was already waiting for me in the call, shrouded in a black shadow. He spoke with a deep voice filter that disguised his voice, but I had the unshakable feeling that I knew him from somewhere. I couldn’t quite put my finger on what made me think that, but no matter. He laid out the groundwork of the bird conspiracy to me in great detail. Be warned: this information is raw, unfiltered FACT. The government might try to deny it and call it ridiculous, but of course, they might. They’re the ones doing it. This is that grade A information, that premium stuff, and I promise you that everything I am about to say is 100% real and not fake at all.

People have been claiming birds are drones for a long time now, but we’re always brushed off as conspiracy theorists making things up. There was no evidence. Well, according to the informant, this time, it’s different. This time… there is still no evidence… YET. But there is an insider. “My informant has had ties in the White House,” the anonymous whistleblower said. This insider fed huge amounts of information to the Birds Aren’t Real movement but was recently discovered and removed from the White House. According to the anonymous source, “My insider was expelled from the Oval Office under the story that he had attacked a staff member while moving on all fours. However, the real story is that he was caught trading information about a certain top-secret United States program in exchange for, uh, food items generally enjoyed by dogs.” Foul play indeed. The program in question is the BS Initiative, short for Bird Surveillance. When asked about the identity of the White House insider, my informant replied, “Although the insider’s identity is top-secret government intelligence, I can say that he has been a MAJOR help to the Bird Truther movement.”

According to the anonymous source, the bird surveillance program all began in the late 60s, when Nixon was elected president. At the time, birds were real, but over the years, our flying friends were nefariously replaced with robotic copies. “By 2001,” my informant said, “all of the real birds were gone, replaced by nearly identical government surveillance drones.” These drones almost perfectly replicate real birds, using sophisticated cameras and microphones, as well as many other devices, to spy on hard-working Americans like you and me every day. These drones use power lines to recharge, which accounts for the number of “birds” you see perched on power lines. Their robotics are so advanced that they essentially mimic the anatomy of real birds while using programs to act exactly like birds used to. Bird drones are also programmed to intimidate Bird Truthers through sabotage: “I noticed that birds were following me around more, and more bird poop was getting on my car,” said the informant. Unfortunately, they’re difficult to study because they self-destruct after being heavily damaged or spending too long in the field.

To think that we were being watched by birds all this time. Doesn’t that make you feel uncomfortable, like a breach of privacy? Or perhaps angry, angry that the government thinks they can pull the wool, or in this case the feathers, over our eyes? But that isn’t all. “Everyone thought that bird drones were crazy, and they were right. But bird drones are just the tip of the iceberg. What else are they hiding from us behind closed doors?” said the anonymous source. “The rabbit hole is way deeper than anyone could have thought.”

When new information surfaces about this shady initiative, rest assured that I’ll update you immediately. For now, however, this concludes another installment of Conspiracy Corner, where I cover the real, gritty news that the mainstream media tries to ignore. Stay tuned for next week, where we’ll discover the disturbing connections between your local foreign car repair shop and the Russian Mafia. Until then, this is The Mustang investigative reporter Evan Ballow, signing off.