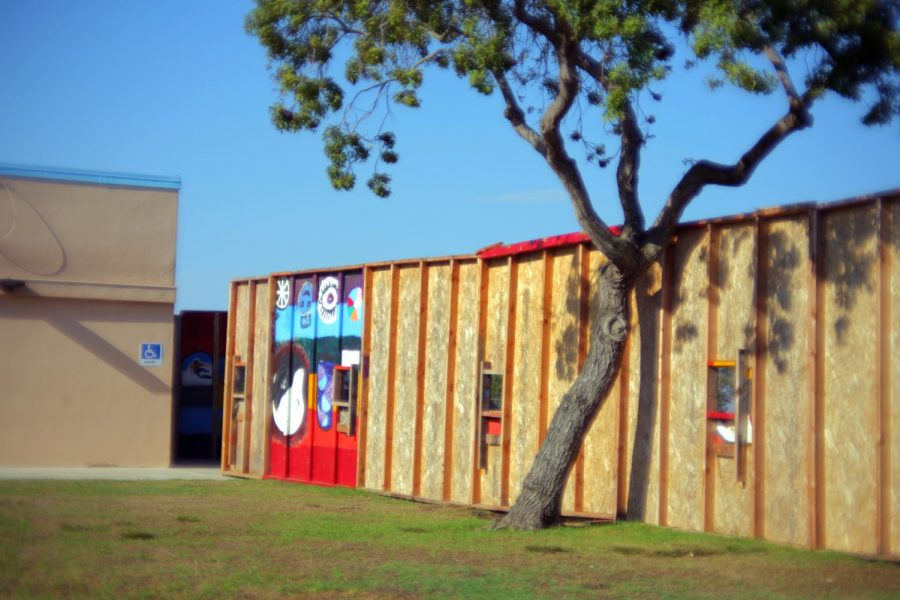 The painted wooden panels that once supported the border between the 110’s and the construction zone have found a new home at Oak Crest middle school.

Two years ago, SDA started construction on its first two-story complex, what is today known as the “new building.”

Most of the students remember the process: the morning sounds of birds chirping and hammers clanking, the view of the ocean behind the rebar frame, the awkward commute to avoid the center of the school.

The art classes took advantage of the missing space by decorating the various borders of the construction zone. Arguably the most infamous add-on to the construction border was the wooden hallway, connecting the North and South sides of the school to the 110’s (the shops).

The 200 foot-long “tunnel of freedom” was completely masked in artwork by students to the point where the wooden base was barely visible. The artistic pieces became a part of the commutes of hundreds of students for almost two years.

Now that construction has finished, instead of throwing away the panels that have exhausted their purpose at SDA, a decision was made to donate the panels to Oak Crest, who is in the middle of their own building project.

However, the majority of SDA’s artwork on the panels will not be visible to students at Oak Crest, for they have been inverted to show only their bare side.

Oak Crest art teacher Lynn Chapman said they planned on painting the panels on their blank sides so they can add their own unique aesthetic to their new home. However, they won’t stay up as long as they did at SDA, said Chapman. They will only stand up for one year at the school.

Juniors Julia Mendoza and Janie Overland both added artwork to the panels over its two year stay at SDA and are generally pleased with their move to Oak Crest.

While Mendoza is pleased that they’re repurposing the panels, she also wanted some of the original SDA art to be visible at its new home.

“I kind of wish they were using our art, but it’s also the middle school so I don’t really care.”

To Overland, the most important aspect of the move was the environment.

“I think that was really cool that the point is recycling. It’s really nice that they didn’t tear a lot of trees down,” she said.