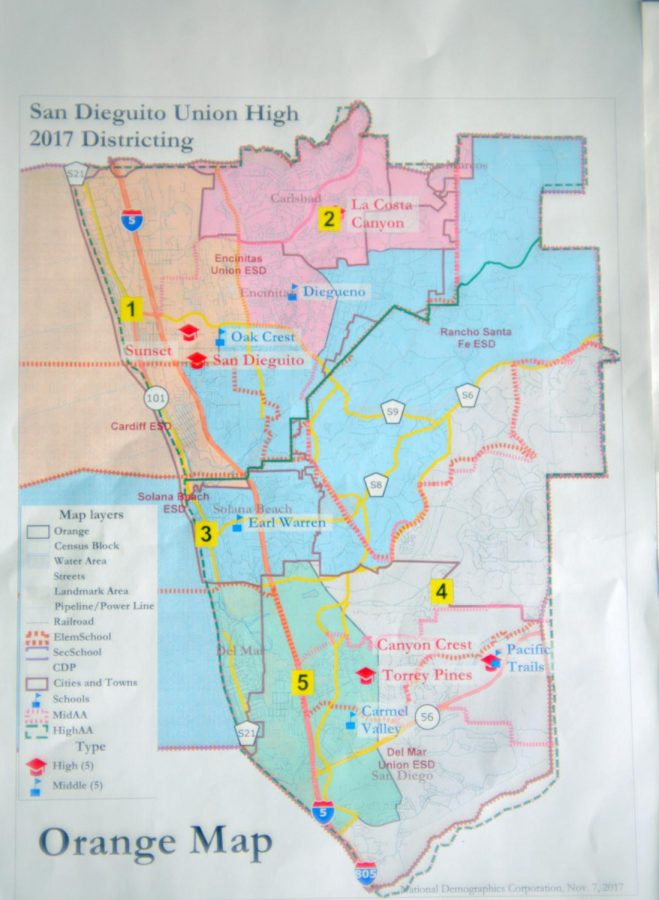 One of several options for creating new voting boundaries within the district.

School Board to Vote on New Election Boundaries

The school board will vote Thursday on whether to abandon the current election system, under which residents vote for all five members of the board, in favor of smaller districts where residents vote for only one local member. The vote will take place as part of a regular board meeting on 710 Encinitas Boulevard at 6:30 p.m., following a public hearing about the topic.

A community hearing about SDUHSD’s compliance with the California Voting Rights Act back in November outlined options for new school board voting procedures, but attracted zero attendees other than three district employees, their lawyer, and the author of this article.

This discussion is in response to incidents across the state where cities and districts have been sued into compliance with the CVRA, which forces small district elections in an effort to give stronger representation to minority residents, especially Latinos.

“The major concern that I’ve been hearing from parents… is that they don’t like the fact that schools are essentially being forced to [switch voting procedures], but they’re appreciative that we went ahead and initiated the process ourselves before there was the threat of a lawsuit,” said Superintendent Eric Dill at the November meeting.

Doug Johnson, president of the National Demographics Corporation, presented three options at the meeting for potential new voting boundaries within the overall school district during a video played at the meeting.

Though neighborhoods could be considered into the boundaries, race could not be the primary factor in drawing them, Johnson said. One other factor considered was whether school board trustees would be geographically assigned a high or middle school to represent, or instead ensure that multiple trustees are invested in representing each school, he said.

The first option, called the “green map,” does the latter. Under the green map’s boundaries, each middle school attendance area would have two trustees assigned to it. It also attempts to follow highway and freeway boundaries.

The next option, called the “orange map,” attempts to follow city borders. It would also allow two trustees per middle school attendance area except for Pacific Trails, the newest middle school.

Since then, more options have been presented: the Tan Map, the Blue 2 map, the Cranberry 1 map and the Cranberry 2 map. These were added based on public feedback, according the the district’s website about CRVA.

The school board has held four hearings and community meetings over the past months to help determine the public’s opinion on each option before they vote this Thursday.

“We value [the public’s] input on the process, which is why we’ve held not only the five public hearings that we set up, but these additional community meetings, the website, the email address and the interactive tools,” said Dill.

“This is an open process, so while we don’t have anyone here tonight, it’s not for lack of trying,” he said about the lack of attendees at this particular hearing.

School board clerk Beth Hergesheimer said she knew all the maps presented were acceptable but didn’t have any more specific opinions about any particular map.

“Looking at them, I think, ‘Well, that’s different than that but I don’t know if it’s better or worse,’” she said. “I like the idea that we aren’t trying to follow just the high school [boundaries] or something like that. I think that would be a mistake, but other than that, I didn’t have too many preconceived opinions.”

Information and interactive maps of each option can be found at http://www.sduhsd.net/About-SDUHSD/School-Board/CVRA/index.html.