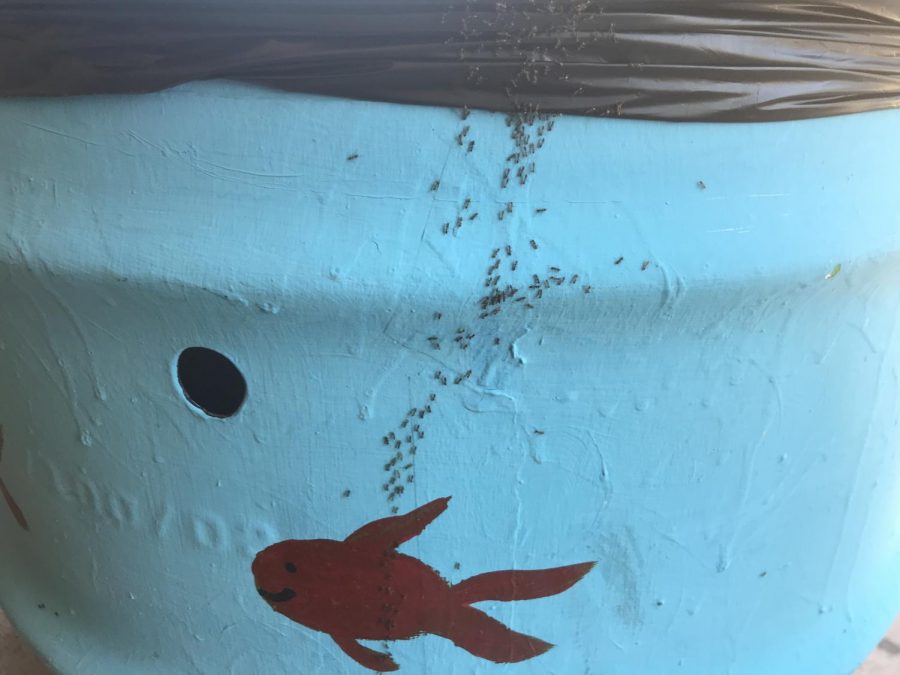 Gallery|2 Photos
Photo by Taylor Lee
Trash can at school filled with a swarm of ants from bottom up.

The Intricate Science of Ants

An estimated “one billion million” ants live on earth—that is to say, there are 7.7 billion people on this planet and counting. Still, the ant population dominates with over one million ants to the ratio of just one, puny human.

In a macro sense, ants are everywhere, from the scattered sea, most definitely in your garden to the Argentine ant infestation which plagues San Dieguito Academy.

The behaviors and actions of ants are not simple; instead, their complexity is multi-layered beneath. Peering between the cracks of the sidewalk and your nearby trash can, this micro-world has a lot more happening than you may think.

According to pop culture’s depiction, ants have either been transformed from a human-like form to a minuscule size in Ant-Man or colossus antagonists in the 1954 sci-fi horror movie Them!

In reality, an ant’s size is relative to an average paper clip, about 6 to 20 mm in length, depending on what type of ant it might be.

An ant’s overall appearance is divided into three body parts: head, narrow-waisted thorax, and abdomen, with other features like two compound eyes, antennas, and maxillary palps. They have tough exoskeletons that can withstand up to 5,000 times their own body weight.

We can classify ants like how we classify cars: by a factor of body shape, color, and size and organize them into categories. In the case of ants, they are split into the genus, a taxonomic rank given to name organisms.

More than 10,000 known species of ants and 700 of them are found in the United States. The most common ones located in California, specifically in San Diego, are Argentine ants and Rover ants. Argentine ants, in particular, pose warning signs due to their invasive nature. There are natural remedies to repel ants through sanitation, tea tree oils, or talking to pest control about the best options.

While some may spend their time on the weekend playing soccer or finishing doing homework, a seventeen-year-old from Manitoba, Canada, spends about eight to ten hours a weekend filming and editing videos about ants.

He operates an educational Youtube channel with more than 1.6k subscribers called Ants Manitoba, which includes tutorials that go over each species and helps the public understand ants, or cultivate myrmecophily, a literal translation that means “ant love.”

He crouches down near an anthill through treks in his neighborhood to identify them and sometimes keeps them. In one video titled “How to Catch a Queen Ant,” Ant Manitoba gathers his materials: a test tube and two cotton balls that sit on his counter. Methodically demonstrating steps from clip to clip, he gently pokes the queen ant into the test tube, then naturally lets it climb in and places a cotton ball closing. Storing it in a dark environment, the task is done.

“I love watching them do their work and do their business around the colony. While observing what they are doing, how they would react, and see how they interacted,” he said.

Years later, Ant Manitoba got to interact with the creator of AntsCanada at a meet and greet event. Inspired by AntsCanada’s videos, he chose to create his own channel and had the chance to connect with people all over the world.

“It’s incredible what ants can do for our environment as well, and the impact this hobby had. I got to know people all over the world from places like Australia, Thailand, Singapore. I’ve got one person from my hometown who is trying it [ant keeping] out, and I am actually keeping their colonies over the winter to hibernate them,” said Manitoba.

How does one understand ants? Some methods include gathering data and synthesizing results into statistics and conclusions, especially in environmental biology research. Andrew Robertson, a first-year graduate student at Southeastern Louisiana University, is writing his thesis by looking at whether or not the red imported fire ant, or RIFA, are impacting the foraging behavior of species native to the area in his first part.

“These [red imported fire] ants forage for seeds, as well as other invertebrates. They are significant because they play a big part in soil aeration, nutrient cycling, and seed dispersal,” Robertson explains.

Still in the research process and furthering his education in biology, observations are slowly emerging and, in one finding, the way they interact and eat food.

“The harvesters tend to forage in obvious streams of workers, so baiting certain distances with different foods may show if they switch to a more vegetarian diet to avoid dealing with the fire ants or stop venturing far entirely.”

To receive food, ants communicate with other ants, pheromones, sounds, and touch. As ant’s antennas touch their radars, they convey signs like invaders or rescuing the juveniles and sense where areas may be dangerous or safe.

Communication is one of the key aspects of self-organization, especially when we can see ants perform ant-nest architecture. They band together in the shape of a raft to survive floods. Ants do their best to help their colonies survive, and when pulled apart, they do everything they can to regroup.

Ants’ behaviors are beneficial to the applicable ideas of metaheuristic optimization algorithms and leadership skills like teamwork.

While the brain to body mass ratio is small for ants, they are quick-witted creatures that know how to do remarkable things as a team.

What would happen if ants were to go extinct?

If the ecological life cycle eradicated one species of ant in a domino effect, other organisms would be tarnished because they look to ants as a source for food. Additionally, ants help humans in ways we would never have paid attention to.

“If all ants went extinct everywhere, a lot would change… They dominate solitary invertebrates and social insects alike, even warring successfully against wasps, bees, and termites. Even newly hatched alligators can die to the swarm,” said Robertson.

While they help the food cycle, their disappearance in some cases may also prove beneficial.

“Invasive ants have bullied species across Kingdom Animalia on every corner of the globe,” so if some of these ant species were eradicated, this “would allow some species to recover, and potentially diversify into an otherwise unoccupied role,” Robertson added.

Scientists found that approximately 33 percent of ants genes are shared with humans. Ants parallel the way our society functions, as strange as that may sound.

Ants belong to the order Hymenoptera, comprising of sawflies to bees. They are social creatures that live together in large colonies. Queen ants lead the colony and are the sole reproducers, and workers, or female ants, perform many duties amongst looking for food or protecting other ants.

But think about it: humans are assigned jobs or tasks that structure them into ‘classes’ and have a boss figure in their workforce. The ant colony is similarly structured in a way that is innate and natural to follow.

People study ants to understand the functions of evolutionary societies. They study where each ant plays a role, either as an ant that is lazy or doing work; just like humans would. And much like humans, ants main purpose is to survive and help each other.

“Ants only want one thing: a thriving colony. It doesn’t sound so bad, but they pursue that goal with robotic logic. Everything they do is to preserve the colony. Even the queen is servant to their one goal, often being prevented from seeing the light of day by her own daughters.”

There is a lot to unfold about ants, but with every discovery, we may learn a thing or two from them and how they coexist with humans. As with our next encounters, they won’t be ant-ics, but an insect we can hopefully grow to tolerate or even appreciate.