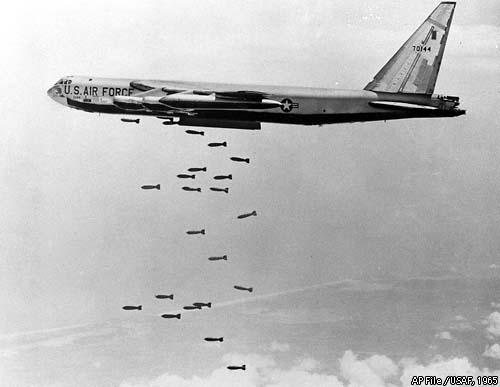 A US Air Force plane dropping bombs over Cambodia.

The Tragedy Of Cambodia: How US Policy Led To The Rise Of Pol Pot 50 Years Later

Hello, my fellow quarantined SDA students. With all of us under quarantine, many of us have an opportunity to explore things that we otherwise might not have the time for. For me, one of those things I’ve been exploring during my quarantine is Cold War history, something I actually have quite a bit of knowledge and passion about. A few months ago, I wrote a piece about the life of SDA students during the Vietnam War. Racked with what to do for my April article, I decided to make it as sort of a companion piece to that article. Since, right now, we’re have the opportunity to take the time do take a look at things we usually don’t have time for, I decided to take the time to talk about something your history teacher probably didn’t have time to teach you about (given that post- WWII topics are,in my opinion, unfairly glossed over.) Most notably: America’s role in Cambodia, and how it’s bombing and invasion of that country (now fifty years in the history book) was one of the greatest travesties in the history of American foriegn policy.

If you ask most Americans what they think of when they think of Richard Nixon, they’ll probably tell you about the Watergate scandal, which is widely regarded as one of the grossest abuses of power ever conducted in American history. To put it bluntly, he’s not the most revered of figures. But what is less known about him is his foriegn policy, most notably how absolutely odious it was. Make no mistake, putting aside his establishment of diplomatic ties with China (a legacy I would argue is vastly overrated) the Nixon administration had arguably the most odious foriegn policy of any presidential administration before or since (yes, worse than Bush Jr.) Much of this is the result of Henry Kissinger, a man who has gained an “elder status” position among Washington’s foriegn policy elite despite his support of and active participation in war crimes and crimes against humanity. There’s a lot to touch on, from the Nixon’s administration’s support for the Pakistani army as the commited genocide against the Bengalis living in what was then East Pakistan  to their support for the overthrow of a democratically elected government in Chile to the destabilization of Cyprus leading to ongoing ethnic tensions and partition. But by far the worst crime of the Nixon administration was their mentioned actions in Cambodia, which began 50 years ago. This decision, which was both then and at the time heavily controversial, is, in my view, directly responsible for much of the suffering and misery that country experienced.

But first, some historical background for those who are unfamiliar. Cambodia is a small country in Southeast Asia. It borders Thailand, Laos, and Vietnam. Until 1954, it, Laos, and Vietnam were part of French Indochina. Following the Japanese defeat in WWII, the French fought a guerilla war with communists in the region. In the end, the French faced a political defeat, and in 1953, Cambodia was granted independence. It, along with its neighbor Laos, was to be a neutral nation, that would not ally with capitalist or communist forces in Asia.

Cambodia, under the rule of Prince Sihanouk, stood in stark contrast with its neighbors: South Vietnam and Laos, which were falling apart at the seams as communist forces tried to take over. His regime, while still quite corrupt, was efficient at preventing communist forces from taking over the country. He had been able to effectively play both sides of the conflict without harming his country. However, by 1968, as the US was fully involved in the Vietnam War, and the Tet Offensive had taken a huge toll on American forces, small pockets of communist resistance began popping up. They only numbered about 4,000 at the time, and were not a significant threat in terms of the territory, but they were enough to get Sihanouk to appeal for reopening negotiations with the Americans

America, under the leadership of Nixon and Kissinger, responded to the ongoing Khmer Rouge crisis by brutally and savagely bombing the rural countryside of a neutral nation whose leader had not invited them to do as they were doing and openly protested them for doing so. The result was anywhere from 30,000 to half a million dead Cambodians, many of them civilians. This escalation was heavily protested in the United States, and was the reason for the student protests at Kent State.

This wasn’t just a moral travesty, but also a political one. These bombings led to the rise of the fanatical Khmer Rogue, a hardline Maoist organization led by Pol Pot, one of the 20th century’s most infamous dictators. As mentioned, before the US bombings, the Khmer Rogue only numbered about 4,000. By 1972, as the bombs (nicknamed “Operation Freedom Deal”) had ravaged the countryside, that number was 70,000. On top of that, pro-American forces, led by Lon Nol and supported by factions of the US military, overthrew the monarch, which led to him and his followers, known as GRUNK, allying with the Khmer Rouge, escalating the situation even more.

Despite being a military junta, Lon Nol’s government was inefficient and heavily reliant on the US. In 1975, the same year Saigon fell, the Khmer Rouge managed to take the Cambodian capital of Phnom Penh. This would lead to the Cambodian genocide, where the Khmer Rogue would end up killing one Cambodian in four in one of the worst atrocities of the 20th century. The genocide was only defeated when Vietnam, Cambodia’s neighbor, invaded the country, deposing of the Khmer Rogue. Ironically, many in the US opposed this decision, such as then Secretary of State Zbiginiew Brezinski saying “I encourage[d] the Chinese to support Pol Pot…we could never support him, but China could.” The Khmer Rouge would go on to fight a ten year long guerilla war against the Vietnamese, killing countless more people until finally, in 1989, peace was finally made in that war torn region.

The assault on Cambodia by the Nixon administration is in my opinion, more of an outrage than Watergate could ever dream of being. The United States is, in my view, directly responsible not just for the suffering inflicted via its bombings, but for the aftermath as well. Hopefully such foolish and malicious foriegn policy decisions are a thing of the past, though with Trump’s betrayal of the Syrian Rojava and his assasination of Solemani, call me skeptical.