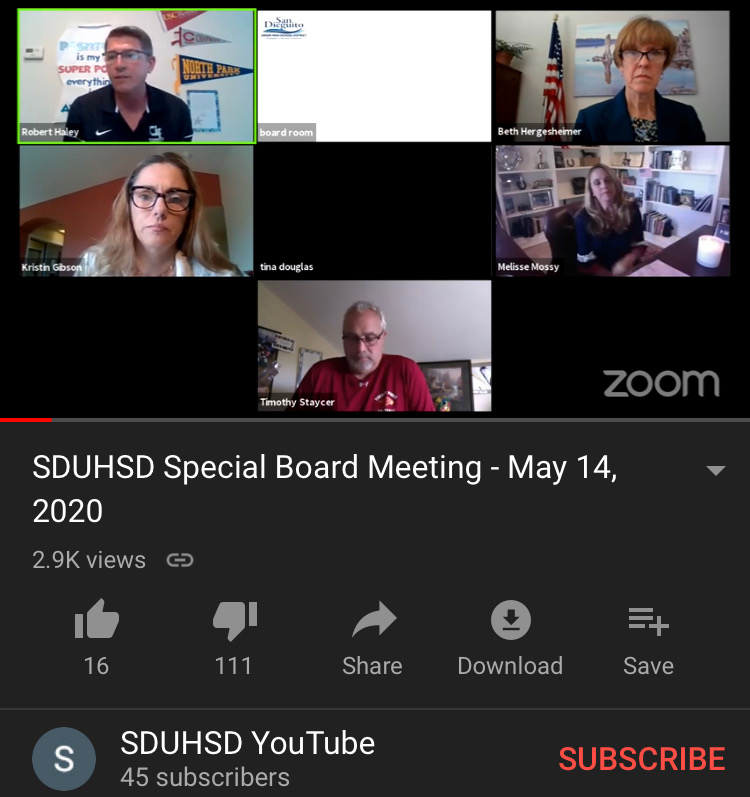 SDUHSD holds a special virtual board meeting over Zoom to discuss new changes to the grading policy.

After many complaints and protests from community members, San Dieguito Union High School District announced that students will have a choice between a letter grade or a credit/ no credit grading policy for the fourth quarter.

Superintendent Robert Haley sent out a letter on May 15 with the following message:

“I want to sincerely thank all of our students and families who are engaged in distance learning. We know how challenging this can be as we continue instruction and learning in our virtual school district. Last night, the Board of Trustees took action that amended our Distance Learning Plan Spring 2020 Grading Policy. After consideration, they voted to direct staff to implement a grading system that includes an option for high school students to earn Credit/No Credit or a letter grade that holds students “harmless” as a result of school closure on March 13, 2020.

We acknowledge this change creates significant issues and anxiety not just for students, but for our teachers and counselors as well. We will collaborate and craft responsible language that is in alignment with the action taken by the Board of Trustees and which protects our students in making a choice.

Our focus will remain on the health and safety of all of our students, families, staff, and community.”

Amidst the recent announcement, high school students and teachers have added variables to the distance learning environment and grading system.

“We don’t really know what we are supposed to do. It might work in a semester-based system but I don’t know if it will work for Canyon Crest or San Dieguito Academy. There are more questions than answers at the moment,” said an SDA teacher.

Prior to the announcement, The Board had a special emergency meeting on May 14 discussing the new changes.

Bryan Marcus, Associate Superintendent of Educational Services, began with a statement about his findings on how students are comparatively doing before and during distance learning.

According to Marcus, around 4.6% in the third quarter grading period (about 600 students out of 13,000 students) are receiving D’s and F’s which Marcus said is “pretty normal in our day to day circumstances.”

“We cannot replicate the traditional grading schedule. We’re looking at our third or final quarter progress report,” Marcus added. “We’re looking at some personal letters to go home with kids that are in danger of failing on how we can support them as we make this final push for the next five weeks.”

Fourteen out of the twenty largest districts in California such as San Diego, Los Angeles, Sweetwater, San Marcos, and more have allowed the option for grades or credit/no credit.

Nineteen pages of public comments outline concerns from community members pleading for an option to choose letter grades for all students.

“I called many university admissions and they told me credit grade will not be used to calculate GPA, only letter grade will. They said they want to see quantitative measure of a student’s ability. Some said because SAT is optional this year, GPA will become more important in admission. Why are you taking away my child’s chance to improve his GPA in the 4th quarter? His cousin in Washington is getting automatic A,” one anonymous speaker said.

In addition to the comments, community members made a SDUHSD Letter Grade Option presentation asking board members to modify the BP 5121 that states “parents/guardians and students have the right to receive course grades that represent an accurate evaluation of the student’s academic performance” by approving the hold harmless letter grade option.

However, the definition of hold harmless letter grades is in a gray area according to Kristin Gibson, a board of trustee member.

“I think as board members, I feel that both options we are considering are valid. I’d like to just say upfront this is not a black or white issue. I wish that we had heard and we have not is someone who is in favor of the choice and has a student who needs to choose credit/ no credit,” said Gibson at the meeting.

The nature of how colleges will evaluate the credit and no credit has too many unknowns, according to the public comment presentation.

Parents gathered emails sent by colleges regarding the upcoming application process and how grades will be evaluated.

According to colleges such as Cornell University and UC Santa Barbara, letter grades will remain important for admissions and scholarships.

Cole Parker, a senior at Torrey Pines chimed in by saying that he is in the same boat as Farfel and Miyazaki but he can see the drawbacks to why a college might question a student’s choice for choosing to take a class as a credit/no credit.

Above all, students present at the May 14 meeting believe that sophomores and juniors have the biggest impact on the implication of the current grading system.

Jacob Clark, a junior at SDA says he is unsure about his thoughts on the situation.

“I don’t know what to think about it. I like the idea of letter grades but I wish they decided to do it earlier so I could have done more to keep them up since they matter now,” Clark said. “I understand how some people want these letter grades to boost their GPA, but it puts people who couldn’t focus on their grades or never had the opportunity to do so in a really hard position. I hope colleges remain non-partisan when looking at this choice so that nobody can be hurt by it.”

Board members wish to discuss this more at the next meeting happening on May 21, 2020. If you would like to have your voice heard, contact SDUHSD to see how you can get involved.