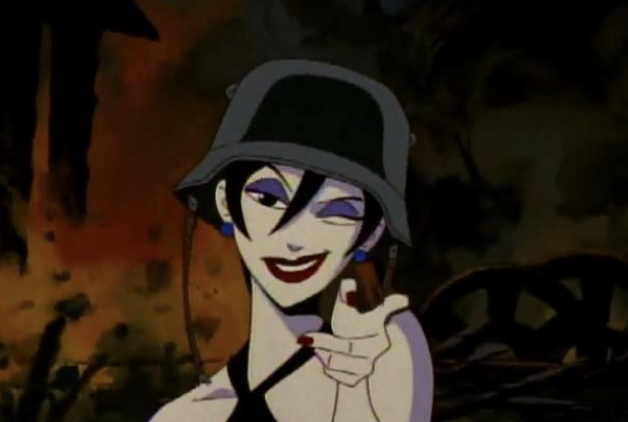 Pearl Jam girl from “Do The Evolution”

The ’90s was the era of music videos. With MTV as dominant as ever, and the alternative boom in full swing, artists often went out of their way to make music videos as over the top, creative, and elaborate as possible. So, when the question of what was the best music video of that era comes up, a lot of answers come to mind. Is it “Smells Like Teen Spirit”? “Vogue”? “Nothing Compares 2 U”? None of these are bad answers, but they aren’t the ones that I would give. For that, we’d have to look at the music video for “Do The Evolution”, a 1998 song from Pearl Jam’s fifth album Yield. And in this article, I hope to analyze why I believe that “Do The Evolution” and its music video are not merely fantastic, but in many ways, deeply culturally relevant and powerful. But first, we need some context.

From 1991 to 1994, Pearl Jam was one of the biggest names in music, only held back by the world-conquering titan of a force that was Nirvana for the title of the kings of grunge. Their first album “Ten”, while not initially a huge success, came to prominence as “Smells Like Teen Spirit” conquered the airwaves and brought grunge into the mainstream. The band’s next two albums “Vs.” and “Vitalogy” enforced this notion even further.

And then Kurt Cobain died.

I don’t really think it’s often enough emphasized how much Kurt Cobain’s death changed music as we know it. The end of Nirvana more or less meant the end of grunge, with every other band in the genre either fizzling out (see Alice In Chains) or mixing their sound with elements of alt-rock in order to stay relevant. One way or another, it tended to involve opioids.

Pearl Jam couldn’t really recapture the magic of their first few albums. Their fourth album from 1996, “No Code”, was born out of a very troubled and tense recording situation, and didn’t leave many critics or audiences all too happy. Luckily, they managed to make a slight comeback with 1998’s Yield which, despite only receiving mixed to positive reviews, was heralded as a return to the classic Pearl Jam sound America had fallen in love with on those first three albums.

This song in particular “Do The Evolution” was not released as a single, but it did manage to get itself a music video and become a minor hit on the rock charts. And that’s a shame, because, at least in my opinion, it’s far and away Pearl Jam’s best song. And I don’t say that lightly. Pearl Jam has been around for almost thirty years, and have made tons of amazing records along the way. But none of them, at least none that I’ve heard, are quite on the same level as “Do The Evolution”. Now, why is that?

Well, for one, on a purely aesthetic level, the song is awesome. The central guitar riff and percussion give the song a driving, powerful intensity. It’s the musical equivalent of a tank riding into battle, flattening everything in its path. And Eddie Vedder (SDA alumni) has never sounded better. His ear-piercing shouts are nothing short of incredible, and the fact that he’s able to distort his vocals as much as he does while still maintaining a melody underneath it all really is something to behold. But that alone would merely make it a really good Pearl Jam song, not the best thing this band has ever done. To understand why I think that is, we need to take a look at what this song and its video actually means

At first glance, the video seems like not much more but a bunch of disturbing images spliced together randomly. We open by seeing the food chain evolve throughout history: cells evolve into plankton, plankton is eaten by crustacean-like creatures, those are eaten by fish, which are eaten by sharks, then by a T-Rex, and then the T-Rex dies from the asteroid. From there, we see a smaller primate being crushed by a bigger primate, which is then beaten with a club by a Neanderthal, who then has a rock thrown at him by normal humans. From there we see a bunch of spliced together disturbing images: stockbrokers jumping to there deaths, Nazi death camps, a WWI battlefield, pilots bombing a Vietnamese village, a man beating his wife with a belt, environmental destruction, and finally, a nuclear holocaust. All throughout these images, we see a frantic-looking, black-clad, dark-haired woman appears in the background, supposedly representing death. The point is to be ironic, i.e a song that’s about “evolution” with his music video that shows that no matter how much society has evolved and changed over the years, humans are still fundamentally cruel and sadistic to one another. This is emphasized by the repeated image of people circling around a bonfire: ranging from book burnings to cross burnings to Neanderthals dancing. But I think that the message of the song goes even deeper than just that, and to understand why we need to take a look at the actual song.

The song “Do The Evolution” is not from Vedder’s own perspective. Rather, it’s from the perspective of some kind of powerful, supposedly advanced titan of a human being that dominates and dictates everything in its path and does whatever they want with it in a fashion that’s borderline Objectivist in thinking. All of this is justified because, to quote the song “it’s evolution, baby!”, reflecting an almost fascistic mindset of a supposed Ubermensch. And, at least in my view, this is what the music video is reflecting. All the destruction that we see in the video are products of people who believe themselves to be superior to others, often based on some kind of class distinction. A prime example of this is two images we see, both framed in a similar way. The first is Roman slave masters whipping slaves carrying bricks to the Colosseum, while a proud Roman general stands with his son at what he’s built. The second we see are factory workers creating materials for war while a CEO and his son stand proud of their industrial complex. And I think this gets to the heart of what this song and music video are about.

In America, and across much of the world, we tend to worship the kind of people Vedder is singing from the perspective of the ruthless businessman or politician who manages to build themselves an empire. We do this because we like the idea of power, of having that kind of control. But “Do The Evolution,” asks what I think is an increasingly important question: Should we? Everything seen in the video: from the environmental destruction to the exploitation of people to the waging of war: they were caused by people who were mad with power and were free to do whatever they want. And, in the end, you know what they say, absolute power corrupts absolutely. And now more than ever, that’s a message I think we could all stand to learn.