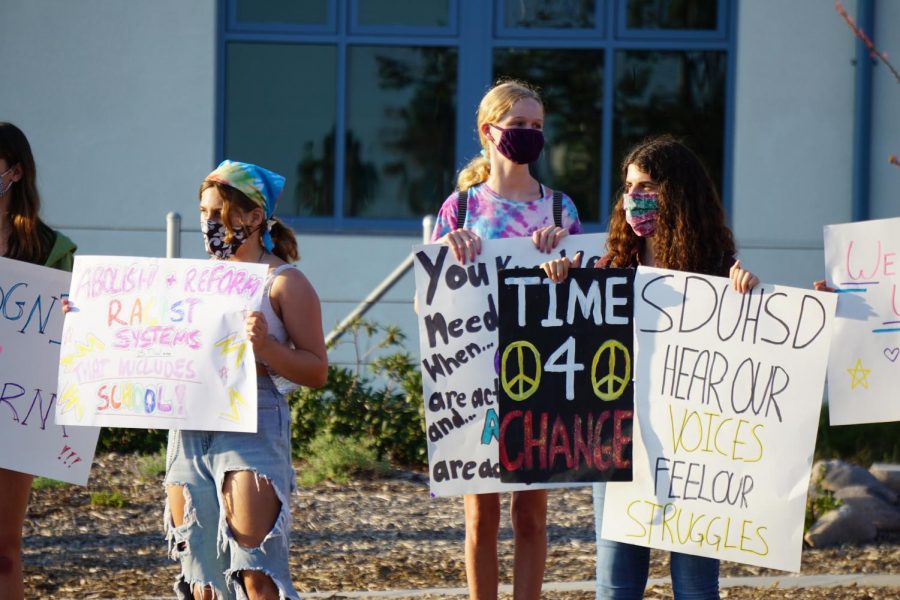 By Taylor Lee and Ria Chockalingam

One subgroup of Encinitas4Equality includes their youth group. The student leaders, Aya Jaffer and Joy Ruppert, both sophomores at SDA, facilitate ways to increase collaboration and dialogue about implementing meaningful changes in the San Dieguito Union High School District.

“We’ve heard many different stories of students who felt uncomfortable, who felt unsafe, who had racist remarks said to them. We want to work to make our schools a place of education for students because that’s what needs to happen if we want to alter people’s racist ideals,” Jaffer highlighted.

Since then, students like Jaffer and Ruppert have been constantly pushing for change within the district, hoping to influence board members to implement changes for everyone.

The list of demands outline requests and recommendations for SDUHSD is believed to be long overdue and essential work to address racism and lack of diversity in the middle and high school curriculum.

The first request? To be placed as a priority for their agenda item on the September board meeting.

“We want to get more schools involved, not only SDA but throughout SDUHSD, clubs, different classes, diversity days, etc. We are specifically targeting our school board right now because they are the ones who can control what we do but we have been constantly ignored,” Ruppert said.

However, despite all of their efforts, students at the meeting with administrators from La Costa Canyon, Canyon Crest Academy, and San Dieguito Academy said they were disappointed that they were repeatedly ignored by the school board, the one that has the most control over all the schools, according to Ruppert.

From protests, emails, and public comments, there have been no conversations sparked by district members in the public meetings.

“Our E4E group chose that while we can not get any farther with the school board until they agree to meet with us that we’d go from the individual schools then up. By having this conversation with the heads of our schools, we hope to share our ideas with them and see their perspective,” Jaffer said. “We created a list of demands to show that people have a voice and that we really care.”

The letter outlines a few requests such as requiring education and staff training around racial justice, inclusion, and diversity.

“Allyship is a lifelong process and demands commitment in both the classrooms and the community,” the letter reads. “In addition, SDUHSD will pledge to work in allyship with our BIPOC and minority communities through a written statement of commitment to equity and anti-racism via email and on the district website.”

According to the letter, “E4E plans to provide workshop opportunities that will be offered free of charge and via teleconference for all educators and staff, e.g., sensitivity-based training on facilitating productive conversations about race, sensitivity around language, culturally responsive teaching.”

Additionally, E4E hopes there are clear, transparent, and systemic changes in response to racism in school policies and procedures. This would mean that students will have repercussions for racial slurs, hate crimes, and acts of oppression, with zero-tolerance policies that lead to suspension, apology letters, and education and training programs to correct actions.

Many students hope to see these issues taken more seriously by the SDUHSD administration. Dr. Barnette, the assistant principal at SDA, emphasized that her “ primary responsibility is to maintain a safe learning environment for all students.”  Barnette adds that “students who engage in acts of hate can be suspended and/or recommended for expulsion. In addition to consequences such as suspension from school, [they] are committed to restorative practices which include helping students take responsibility for the way their choices impact others.”

In regards to the improvement of education, students have brought up ideas and activities to provide a more anti-racist curriculum. This is not only limited to the social science classrooms like history, but Jaffer says representation in learning materials can happen anywhere.

Canyon Crest Academy’s Raven Advisory Board and SLATE club complied a list of anti-racist resources and possible research topics such as talking about to support black-owned businesses and how it can help the community in business to how facial recognition and surveillance technology can be racist if the artificial intelligence model is trained incorrectly or without sufficient data.

To encourage cultural appreciation and diversity, schools like CCA have implemented a diversity board, Black Student Union, SLATE club, and an Asian Student Union.

In the future, many SDA students hope to see additions such as a cultural day/week, a DEI board, BIPOC Student Unions, and events to stimulate conversation around racism. A cultural week could include events like presenting films about different ethnicities, dressing in traditional attire, and cooking traditional food for other students.

The next steps will be to assess students, us as a district, as all students as all teachers to come together and push for racial equality, equality within our schools, Ruppert said.

“Community members can submit public comments because they have to read it, join communities or clubs who support similar movements to E4E.”

If you are interested in getting involved, you can fill out their form.