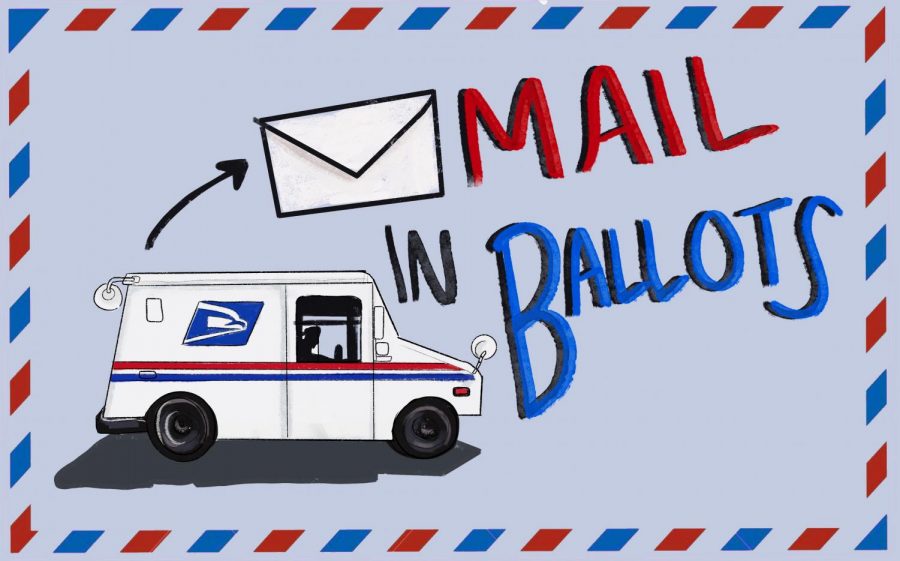 Mail-in Ballots and the USPS are a big thing now

The founding of the postal service even predates that of the United States, illustrating its important historical significance. The United States Postal Service does not only deliver mail and packages but also provides other essential services such as money ordering life insurance, and money transfers.

The USPS is legally obligated to bring mail to every single US household. This is very important for people who live in rural, secluded areas since most mail companies will not deliver where it is strenuous and unprofitable. In fact, sometimes the USPS must use mules to deliver mail to the bottom of the Grand Canyon for the few residents who reside there. Not only does the USPS deliver mail, but it also will transport livestock which is essential to America’s farming communities.

The pandemic has made it hard for postal workers who have said that they are constantly worried about catching coronavirus while delivering mail as they often aren’t properly protected. One postal worker even told an interviewer that “There is a joke amongst the office: Are we essential or sacrificial?”

The pandemic is also affecting the USPS financially, damaging their already dwindling funds. The former Postmaster General, John Potter, asked Congress in April for 89 billion dollars in support. Without this money, people have suffered from debilitating service interruptions, preventing them from receiving medicine, food, and livestock, especially in rural communities. This is particularly upsetting as many people are leaning heavily on the USPS during the pandemic, ordering essential, voting, and sending the 2020 census all through the mail.

The USPS is crucial to many people’s lives. In 2019, they delivered close to 1.2 billion prescription medications, including almost 100% of prescriptions from Veterans Affairs (VA). Many rural small businesses also rely on the postal service in their area. Even when using a shipping company like UPS, Amazon, or FedEx, your mail may be delivered to you by the USPS as they often give mail to the postal service for the last part of the trip, especially when shipping to a rural location or when unable to deliver for another reason.

While the postal service is a part of the federal government, it is operated independently, and is also self-funded, financing itself solely from postage and stamps. Only so much profit can be made from this, however, and this is perhaps why, over the years, the USPS has sought alternative modes to profit. The USPS has encouraged stamp collecting since the 90s, sells postage-themed(?) dog costumes on their website, and even partnered with fashion company Forever 21 to produce a postage-themed clothesline in 2019.

It is usually assumed that the USPS has been suffering because of the national transition to texting and emailing; however, this is not the case.

It is believed by experts that the USPS would still be profitable if not for the Postal Accountability and Enhancement Act of 2006. The law required, among many things, that the USPS must prepay retirement for its employees on a 50-year schedule. In effect, the postal service had to start reserving 5 billion dollars a year for ten years, a massive financial disturbance. The act also restricted the USPS’s income by implementing price caps on postage at the cost of delivery.

The effects were prompt. In 2006, before the act was put in place, the USPS reported a net income of $900 million. However, in 2009, three years after the act was enacted, the postal service reported a net loss of $3.8 billion. Despite many other factors seem more likely to contribute to this change, such as the transition to electronic communication and the 2008 recession, it has been estimated that the act is responsible for 74% of their net losses since it was passed.

Experts have suggested that to increase profits, the USPS could offer more services, some that they had offered until 1960, including financial services, basic banking services, and issuing hunting and fishing licenses. This could also aid the estimated 25% of people in the United States living in underbanked communities.

The USPS has become especially important as mail-in voting will likely see a historic increase for the 2020 election in November due to the Coronavirus pandemic. Poll workers, who are mostly in the especially vulnerable age range of 60-75, likely won’t work this year, leading to longer lines at polling stations. Due to health concerns, polling stations have also been reduced. During Wisconsin’s primary in April, Milwaukee’s reduced polling sites from 180 to just five, leading to massive crowding.

An estimated 70% of Americans are in favor of allowing any voter to vote by mail if they desire. However, certain people are against wide-spread mail-in voting as they fear it will lead to fraud. Tucker Carlson, an anchor on the Fox news channel, stated, “Why haven’t we had mail-in ballots for the last 230 years? Maybe the reason is mail-in ballots are an invitation to widespread fraud and manipulation.”

However, his point is not true. The United States has had mail-in voting since the Civil War and 25% of Americans voted by mail in the last four years. In Oregon, Washington, Alaska, Hawaii, Utah, and Colorado, universal mail-in voting– which has been suggested for this upcoming election– has already been in place for years.

Despite this, fraud is plausible with mail-in voting. A 2005 bipartisan report is often cited, stating that “absentee ballots remain the largest source of potential voter fraud.” However, fraud is still quite rare. In Oregon in 2016, only 54 cases of suspected voter fraud emerged from the over 2 million ballots cast in the state. Oregon’s former secretary of state, Phil Keisling, explained that “[the] vast majority of Oregonians don’t care about politics to the level that they are willing to risk prison time for it.”

According to CNN, experts agree that voting by mail increases civic participation by removing unnecessary obstacles to voting for many people. However, opponents often believe that increased participation would be beneficial for Democrats, even though research has found that mal-in voting does not help one party over another.

The attorney general of Texas threatened to prosecute anyone who encouraged others to get an absentee ballot if they were afraid of COVID-19. The lieutenant governor of Texas said, “When you have an opportunity to steal, the Democrats will take advantage of it and that’s what this is all about. There is no reason… that anyone under 65 should be able to say ‘I’m afraid to vote.’… This is a scam by the Democrats to steal the election.”

No matter if officials fight it, many more people will likely be voting by mail this year compared to years past.  In Pennsylvania in 2016, the state only received 107,000 mail-in ballots but has received over 1.8 million applications for ballots in 2020. This begs the question: how will states handle an influx of mail-in ballots?

Estimates of how much the election could cost during this pandemic top $4 billion. Yet, only $400 million is available to states from the CARES act. So, states desperately need funding to handle the election this year.

Not only will the amount of mail-in ballots be unprecedented, but the time it takes to count them. Americans must be prepared to wait for days after November 3 to know who won the election. While it may be difficult, patience is key in this election to receive fair, true results.