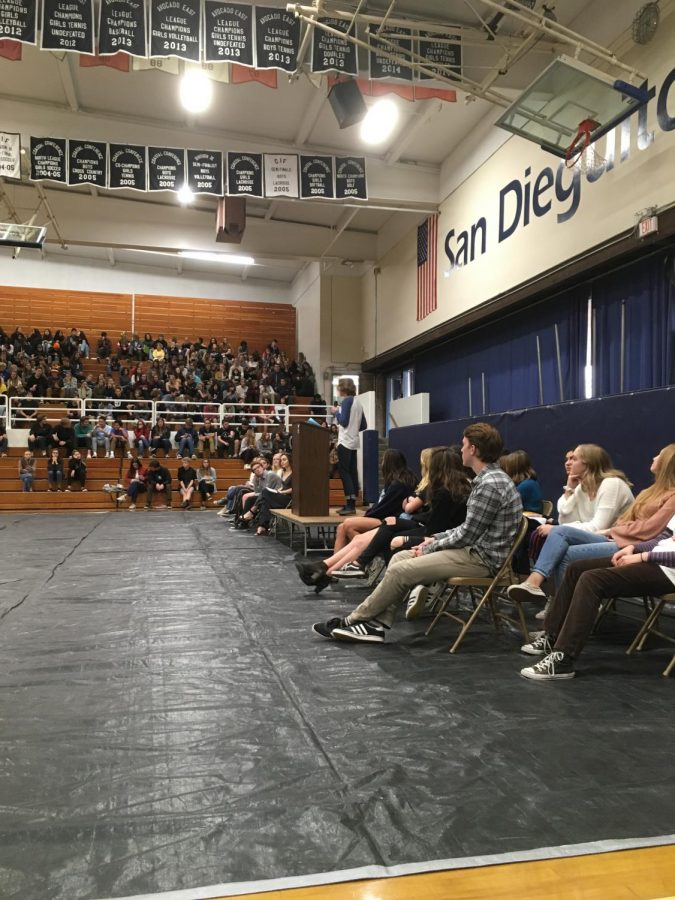 Gallery|2 Photos
Photo by Joice He
Junior Kalvin Grensted and student body president candidate gives his speech to SDA students with other candidates for different things stand by.

Candidates give speeches at the Nomination Convention Assembly

SDA students gathered in the gym on Friday for the annual student council and student director election assembly. At the assembly, current ASB vice president Valerie Telnack introduced each candidate and their desired position, starting from sophomore directors and ending with student council president. Telnack then stepped aside to allow each candidate to deliver their campaign speeches to the student body.

The candidates for next year’s student body president were juniors Amelia Kaiser and Kalvin Grensted.

Grensted, who spoke first, came to SDA because his dad and his older brother told him stories about their experiences when they attended SDA — about how SDA was a community. Grensted ran for sophomore director in his freshman year, and has since been elected junior director. He said he devotes time outside of school hours to programs like WASC that help better the school, and participates in ComedySportz, the fishing club, and the volleyball club. Grensted says his job as student body president would include listening to the student body when making decisions about student dances and activities, and to “be the missing link between the students and the staff.” “No matter who you are, no matter what your ideas may be, I will welcome you with open arms and open ears to hear out any ideas to better this amazing school. I will do my best to make your ideas come true,”said Grensted.

Kaiser began her speech by saying that she believed listing off personal goals and accomplishments was not the correct thing to be doing at the assembly, and instead went on to describe the duties she would take on as student body president. “What this is about is how I can serve and represent you…I am the kind of person who cares about you,” said Kaiser. Kaiser believes in a “new chapter for SDA,” and says that the warmth of community is more important than personal achievements. “One thing is for sure, I believe in us. I believe in…the power of the individual, I believe in the power of community, and I believe in student voice. I believe in all of your voices,” said Kaiser. If elected as student body president, she promises that every student voice will be heard, no matter how small.

After the end of the assembly, students were informed that voting would be taking place in the Performing Arts Center during lunch on Friday, as well as homeroom and lunch on Monday and Tuesday.

The candidates for sophomore directors are current freshmen Ella Decking, Bella Goodwin, and Cassie Miller, and Manelle Touzni. Decking, Goodwin, and Miller are campaigning as a team, and are looking forward to planning winter formal should they be elected as next year’s sophomore directors. “Being in ASB this year has taught me so much about being a leader, and putting myself out there. It would be such an honor to plan Winter Formal with Cassie and Bella –- I think we would do an amazing job,” said Decking.

In her speech, Touzni first explained what being a student director entailed, then elaborated on her past leadership experiences. “Ever since I was little, I always loved taking part in school activities, but I always wanted to do something more…I was vice president of ASB in 7th grade, as well as a team leader, so you can trust me,” said Touzni. She promises to include all student voices if she is elected, and use them to increase connectivity in the student body and make the dances even more entertaining.

Next up were the junior director candidates: Olivia Alcantar and Piper Bailey, Lindsay Myrick and Juliana Tecotsky, and Troy Zevin.

Alcantar and Bailey, running as a team, acknowledged the students’ busy lives and personal growth in high school at the start of their speech, and promised to make SDA a place where both their educational and personal needs were met. The two of them mentioned previous projects that they have done for the school, such as the travelling piano and the skate demo. “If elected as your junior directors, Piper and I promise to throw one java per quarter…and plan more awesome events…we want anyone from anywhere and everywhere to be included and accepted, and [to] have an amazing time at SDA.”

Myrick and Tecotsky, running as a team, promised to listen to the opinions of the student body and take them into account when making decisions. If they are elected as junior directors, they will be planning prom and promised to find a great theme for the coming dance. They also mentioned that SDA is an artistic school, and that the students express themselves creatively. “In ASB, our goal is to get students involved here in SDA…Keep SDA funky, and vote Juliana and Lindsay because we’re spunky!” said Myrick and Tecotsky.

Zevin opened his speech by stating that objectively, school dances were terrible. “A bunch of chaotic, sweaty high schoolers shoving into each other all while shouting Lil Pump’s new song…So the question is why? Why do I go to the dances…because it’s fun,” he said. Zevin promised to preserve the fun, chaotic energy of the dances if he is elected as junior director.

Next year’s senior directors spoke briefly at the assembly today. Sydney Jirsa, Jordan Daniels, and Bella Meyer will be SDA’s new senior directors, and will be planning senior java, senior out, and the senior tiles.

The executive positions in the student council were next, consisting of treasurer, secretary, vice president, and student body president.

The sole secretary candidate, junior Jamie Cruz, went unchallenged, but could not be there to speak at the assembly.

The candidates for next year’s treasurer were freshman Ethan Fitzgerald and junior Josie Willard. Fitzgerald is a freshman at SDA who takes Speech and Debate, does karate, loves to travel, and is “really good at math.” Should he be elected, he will be SDA’s first freshman treasurer. “Determination. Passion, Creativity. Open-mindedness. Integrity. Honesty…If I am elected student body treasurer, I will put all of these to use every day for you, students of SDA,” he said.

Next, Willard opted for writing a poem for her speech, stating that she didn’t “want to bore you.” She stressed the importance of the student vote in her poem. “I love SDA so much, it has given me a boost…My name is Josie Willard, and I’m going to treasure you…Josie Willard for treasurer / a vote for me is a vote for you,” said Willard.

The vice president candidates were juniors Morgan Busick and Julia Fumo. Busick spoke about SDA and what is means to “fit in.” She said, “SDA is a place where people belong – people don’t fit in here because fitting in requires you to change who you are to be accepted. Belonging doesn’t require that.” Busick promises to increase opportunities for students to showcase who their talents, such as Exhibition Day and the flag football tournament. “When people feel like part of their community…they feel like they matter…As your vice president, I will ensure that you…find your place at SDA.”

Fumo has not been in ASB before, and said that this is why she is the best candidate for student body vice president because she would bring a fresh perspective and new ideas. “I want SDA to continue being a place where everyone can chime in…and for me that means field hockey, friends, the beach, boba and, hopefully, ASB,” she said.