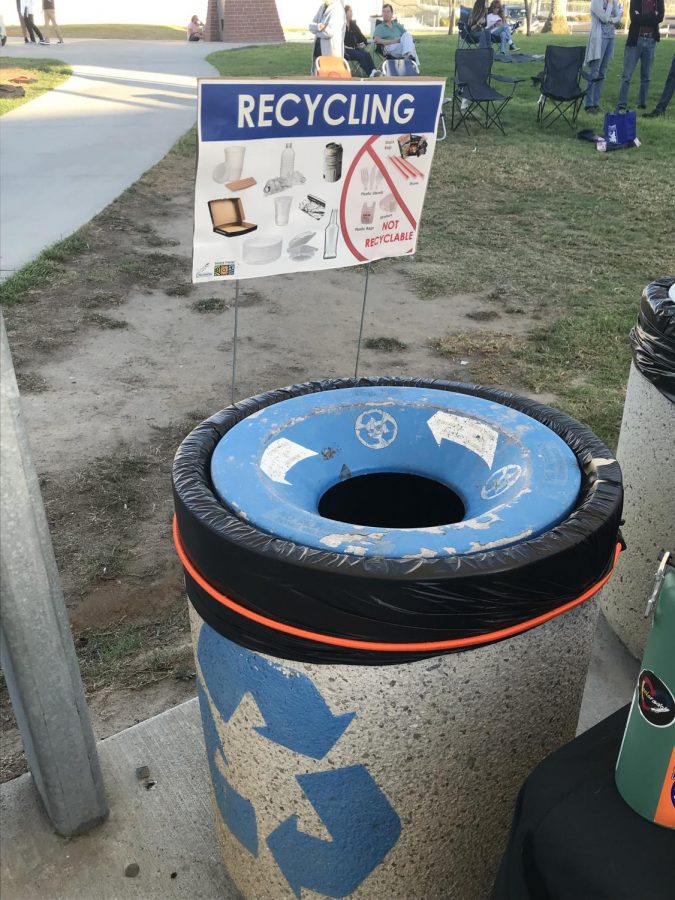 Over 70 band students in Winds I and II and their parents came together last Wednesday on campus to bond and connect over good food, all while being conscientious of the waste that they produced.

“We partnered with Solana Center to compost the waste [from the potluck],” said Band Director and supervisor of the event, Jeremy Wuertz. “We’re just trying to reduce waste.”

The Band Family Potluck lasted from 5:30-7:30, starting with a large buffet and time to mix and mingle with fellow musicians and their parents, and ending with students splitting into groups based on their band sections and playing fun bonding games. The waste from all of these activities was sorted into labeled bins by the Solana Center for Environmental Innovation in order to reduce waste. Students also were required to bring reusable water bottles to be filled at a refill station, and no single-use plastic was allowed.

“We’re focusing on diverting the food waste, insuring that any food that does get wasted gets composted instead of going to the landfill.” said Jackie Bookstein, a representative from the SCEI.

Students that attended the event only had positive things to say about the Solana Center and their efforts to reduce waste, and encouraged other clubs to partner with conservation organizations as well.

“We’re the first group at SDA to partner up with a Compost Center,” said Tyler Brown, a Wind II student. “Our goal is to get other clubs to do this as well to get less waste going into the landfill.”

Representatives from the SCEI also said they believe that SDA individuals and clubs alike can make an enormous impact on the environment. “Reusables are a really big way that all people can be more environmentally friendly,” Bookstein said. “You take lunch to school every day and can make sure that you’re buying things in bulk and putting them in tupperware instead of buying individual, packaged things. You can also use reusable water bottles instead of disposables.”

Bookstein also noted that when she checked the waste bins at SDA, the “recycling bin had trash in it and trash had some recyclable material inside.”

To remedy this problem, she suggested a club or a group of students that feels passionate about reducing waste to put up more signage indicating what items are recyclable and what items aren’t around the trash cans and recycling bins.

“Help your fellow students learn about recycling and why it’s important, and help to spread awareness,” she said.

After the success of the Band Potluck, SCEI said that they’re hoping to partner with more SDA clubs in the future.