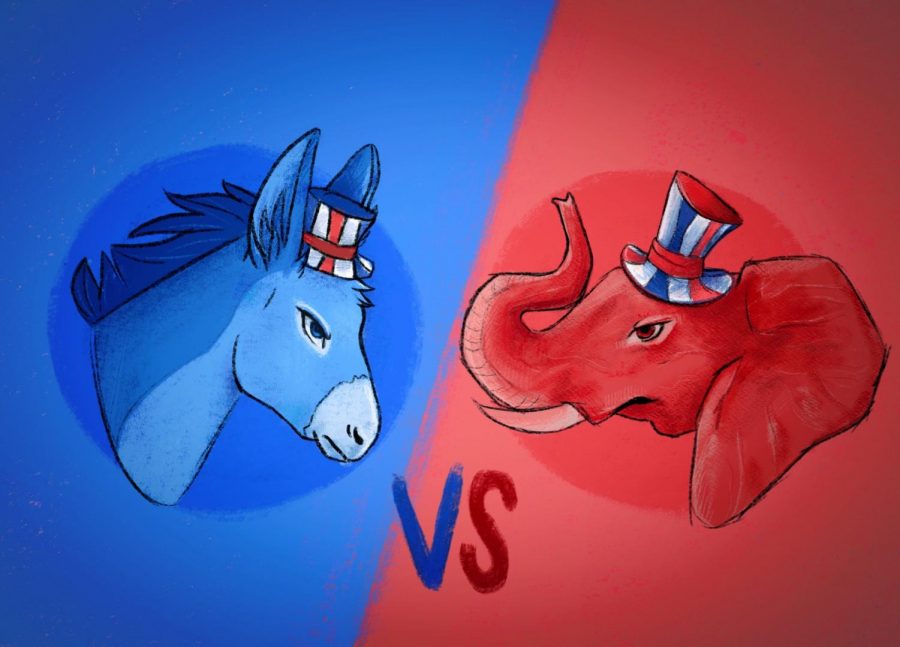 The Democratic Party and Republican Party emblems facing off in a duel.

A Tale of Two Parties

For the first time in history, the Democratic National Convention and Republic National Convention were held virtually. Both drew huge audiences and featured many important figures in each party. With a mix of inspiring speeches and brilliant advertising in between segments, each party made their claim to fire up their bases and persuade undecided voters.

The Democratic party was the first major American political party to hold a virtual convention.

Day One: We the People

“A virus attacks when the body is weak and when it cannot defend itself. Over these past few years, America’s body politic has been weakened. … Only a strong body can fight off the virus.” — New York Gov. Andrew Cuomo

“I’m a lifelong Republican, but that attachment holds second place to my responsibility to my country.” — Former Ohio Republican Gov. John Kasich

“Being president doesn’t change who you are, it reveals who you are … a presidential election can reveal who we are, too.” — Former first lady Michelle Obama

”There are times when I couldn’t imagine how he did it – how he put one foot in front of the other and kept going. But I’ve always understood why he[Joe Biden] did it … He does it for you.”- Jill Biden

“Joe has the experience, character, and decency to bring us together and restore America’s greatness. We deserve a person with integrity and judgment, someone who is honest and fair, someone who is committed to what is best for the American people.” -Former President Jimmy Carter

“We are at a crossroads. We can let the shooting continue or we can act. We can protect our families, our future. We can vote. We can be on the right side of history. We must elect Joe Biden. He was there for me; he’ll be there for you, too.”-Gabrielle Giffords

“This administration has shown it will tear our democracy down if that’s what it takes to win.”- Barack Obama

The final day of the DNC saw the LGBTQ Caucus Meeting, Small, Business Council Meeting, Native American Caucus Meeting, and Poverty Caucus Meeting. The speakers included former New York City Mayor Michael Bloomberg, Senator Cory Booker, Governor Gavin Newsom, former South Bend Mayor Pete Buttigieg, Senator Kamala Harris, the Biden Family, and former Vice President and presidential candidate Joe Biden. Joe Biden’s nomination acceptance speech was lauded by many for being eloquent, passionate, and articulate; however, some cited low standards because of so-called gaffes in other speeches and the fact that Biden read off of a teleprompter (Trump did, as well, in his acceptance speech) as reasons for it being underwhelming.

“We have cried out for justice, we have gathered in our streets to demand change, and now, we must pass on the gift [the late civil rights activist and congressman] John Lewis sacrificed to give us, we must register and we must vote.”-Atlanta Mayor Keisha Lance Bottoms

“Just over 10 years ago, I joined a military where firing me because of who I am wasn’t just possible — it was policy. Now in 2020, it is unlawful in America to fire anyone because of who they are or who they love. The very ring on my finger … reflects how this country can change.”- Pete Buttigieg

“Just remember, Joe Biden goes to church so regularly that he doesn’t even need tear gas and a bunch of federalized troops to help him get there.”- Actress Julia Louis-Dreyfus

The RNC was originally supposed to take place in Charlotte, North Carolina, but was moved to Jacksonville, Florida because of statewide pandemic restrictions in North Carolina.

There was strong hesitation to keep the convention in person, long after the Democratic party decided to make theirs virtual, but on August 4 it was announced by the Republican National Committee that the event would be virtual. After a practically seamless DNC, the Republican party had to make sure that their virtual convention went off without a hitch.

Unfortunately for the Republican party, four days before the convention, one of their most important speakers, former White House Chief Strategist and Senior Counselor to the President, Steve Bannon, was arrested and charged with conspiracy to commit mail fraud and money laundering in connection to the We Build The Wall campaign, thus he was unable to speak.

Day One: Land of Heroes

The first day of the RNC included the counting of delegates for nomination and speeches from former U.N. Ambassador Nikki Haley, television personality and significant other of Donald Trump Jr. Kimberly Guilfoyle, the couple infamous for threatening Black Lives Matter protestors with guns Mark and Patricia McCloskey, Donald Trump Jr., and more.

“If you let them, they will turn our country into a socialist utopia.”-Senator Tim Scott

“If you want to see the socialist Biden-Harris future for our country, just look at California.” — Kimberly Guilfoyle

“I’m speaking to you from an auditorium emptier than Joe Biden’s daily schedule … They’ll disarm you, empty the prisons, lock you in your home, and invite MS-13 to live next door.” — US Rep. Matt Gaetz

“It hurts my soul to hear the terrible names that people call Donald. The worst one is ‘racist.’ I take it as a personal insult that people would think I would have a 37-year friendship with a racist.” — Herschel Walker

Day two of the convention consisted of speeches from First Lady Melania Trump, Secretary of State Mike Pompeo, Senator Rand Paul, Eric Trump, and Tiffany Trump, among others. One of the highlights was Economic Advisor Larry Kudlow talking about the ongoing pandemic in the past tense, which earned him beration from social media and news outlets.

“We have never forgotten the incredible people who were willing to take a chance on the businessman who had never worked in politics. We know it was you who elected him to be commander-in-chief. And we know it is you who will carry us through again.”- Melania Trump

“In closing, I’d like to speak directly to my father. I miss working alongside you every single day but I’m damn proud to be on the front lines of this fight.”- Eric Trump

“Then came a once-in-100-year pandemic. It was awful. Health and economic impacts were tragic.”- Larry Kudlow

During the third night Vice President Mike Pence, Second Lady Karen Pence, former White House Counselor Kellyanne Conway, Lara Trump, and others spoke. The same day as her speech, Kellyanne Conway resigned from her position to focus on her family. Earlier in the week, her fifteen-year-old daughter, Claudia Conway, announced that she was taking steps to legally emancipate herself from her parents and claimed they were physically and mentally abusive towards her.

“The choice in this election has never been clearer and the stakes have never been higher. Last week, Joe Biden said democracy is on the ballot and the truth is our economic recovery is on the ballot, law and order are on the ballot. But so are things far more fundamental and foundational to our country.”- Mike Pence

“A woman in a leadership role can still seem novel. Not so for President Trump. For decades, he has elevated women to senior positions in business and in government. He confides in and consults us, respects our opinions, and insists that we are on equal footing with the men. President Trump helped me shatter a barrier in the world of politics by empowering me to manage his campaign to its successful conclusion.”- Kellyanne Conway

“That’s the Democrats. Between surveillance classifications, leaks and puppet candidates, they never want the American people to know who’s actually calling the shots. But with Donald Trump, you always know exactly who is in charge. Because the answer is you. You’re in charge. Not lobbyists, not special interests, not warmongers or China sympathizers or globalization fanatics. With Donald Trump and Mike Pence in the White House, the boss is the American people.”-Chen Guangcheng

The last night of the RNC featured the Republican nominee acceptance speech of Incumbent President Trump and a host of controversies in which Trump spoke a falsehood an average of every 56 seconds (even while using a teleprompter) and Trump’s audience for the speech was not socially distanced with very few people wearing masks, breaking the administration’s own guidelines for large gatherings. It has been predicted that this could result in a “super spreader event”. Other speakers included Housing and Urban Development Secretary Ben Carson, Senate Majority Leader Mitch McConnell, Ivanka Trump, and former Mayor of New York and Trump’s Lawyer, Rudy Giuliani.

“If you listen to Democrats, the media and liberal elite, they will tell you that America’s light doesn’t burn as brightly around the world as it once did. That is simply not true.” — Utah Attorney General Sean Reyes

“They’re trying to steal the election from Republicans. Just like they did it last time, with spying.”– Donald Trump

“I know his tweets can feel a bit … unfiltered.”- Ivanka Trump

The problem with the Republican’s message was many legates using evidence of present violence and unfavorable happenings to predict the future, reversing the view of Trump’s greatness as the things being prophesied are happening under Trump’s current watch.

Many complained of the lack of diversity at the RNC, especially in viewpoint and race. The DNC featured a number of important Republican figures who denounced the Republican Party and Trump while bringing their opinions to the table.

The DNC had most of their speakers speak at home due to safety concerns while the RNC had many speakers speak at the same podium in the Capital. Trump’s acceptance speech was also held in front of an audience (that went against regulations put in place by his own administration), but Biden spoke in front of no audience and, therefore, no claps or enthusiastic chants.

Overall, both conventions were carefully crafted to appeal to each of their bases and hopefully draw in some other voters.