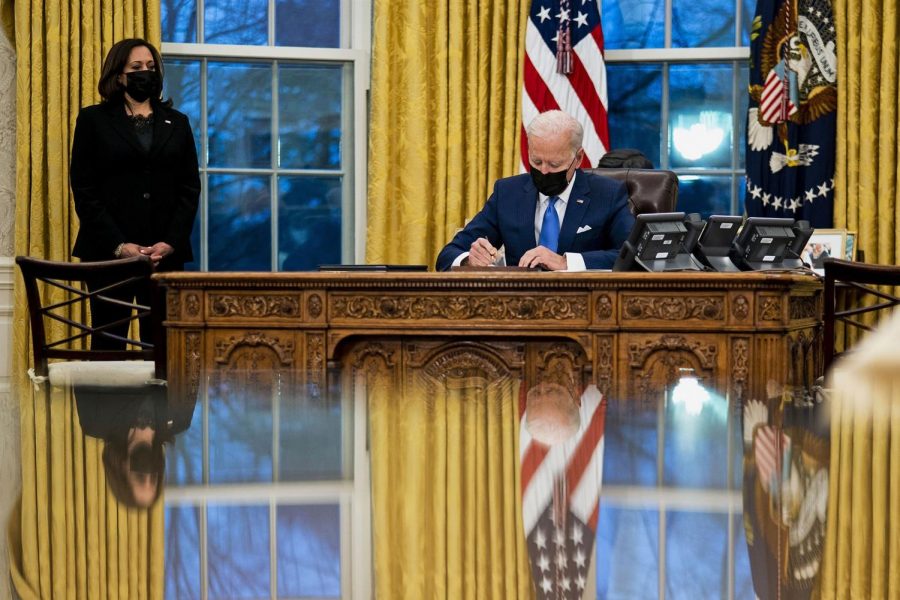 U.S. President Joe Biden prepares to sign an executive order in the Oval Office of the White House in Washington, DC

The first 100 days of the Biden Administration

President Joe Biden has made an unprecedented number of executive orders during his first weeks, and his administration has shown an unparalleled desire to enact change in the country during this action-packed start to the year. Now reaching a total of 37 different orders, covering a variety of topics, including immigration, LGBTQ+ rights, systemic racism, and especially the Covid-19 pandemic.

Biden aimed many of these orders at fighting the coronavirus pandemic that has swept the globe and providing relief to those affected by the crisis. Beginning with a mask mandate for all communities in the higher-risk tiers to slow the spread of disease, the Biden administration then began the process to expand the distribution of vaccines to all Americans in an effort to have the entire population immune by July. As these plans were successfully implemented, the president tweeted that “All adult Americans will be eligible to get the vaccine no later than May 1,” on March 11.

Biden’s orders additionally address fundamental problems in the country that demand change, mainly systemic racism and the fight against discrimination due to one’s race, gender, or identity. The administration seeks to amend these issues with federal guidance on increasing support for underserved communities, addressing the methods used in taking the decennial census and making legislation to prevent discrimination for gender identity and sexual orientation in the country.

Biden seeks to cause a shift in policies on immigration and the treatment of those already in the country. Biden’s campaign statement of “no more kids in cages” has changed slightly over his first 100 days in office as his focus has shifted to the reunification of the children who were taken away from their parents under the Zero Tolerance Policy from the previous administration. With the establishment of a special task force on this issue, President Biden hopes to have all children that were separated between 2017 and 2021 reunited with their families.

Connected to the reunification effort, The White House has removed many restrictions on immigrants from countries in the Middle East and has made efforts to streamline and encourage people from around the world to apply for citizenship in the United States. Though due to the coronavirus pandemic, Biden has made it clear to the public that while the USA is a country that welcomes immigrants, now is not the time as it would be foolish to come to the states during this global humanitarian crisis.

In addressing environmental concerns, President Biden signed an executive order to rejoin the Paris Climate Accord, which former President Donald Trump exited in 2017. This multinational agreement towards addressing climate change helps regulate things like carbon emissions, reducing the use of fossil fuels, and working towards powering nations on renewable energy.

Gun rights have continued to be a heated topic of national debate, and the Biden administration seeks to lay down new ‘common sense’ gun legislation that would try to keep deadly weapons out of the hands of those unfit to own them. While some fear infringement on their second amendment rights, the President maintains that his legislation will only increase background checks and prevent deadly weapons like AR-15’s from getting into the wrong hands.

As the Biden administration continues its term, expect many more new orders and policies that will shape the future of America.