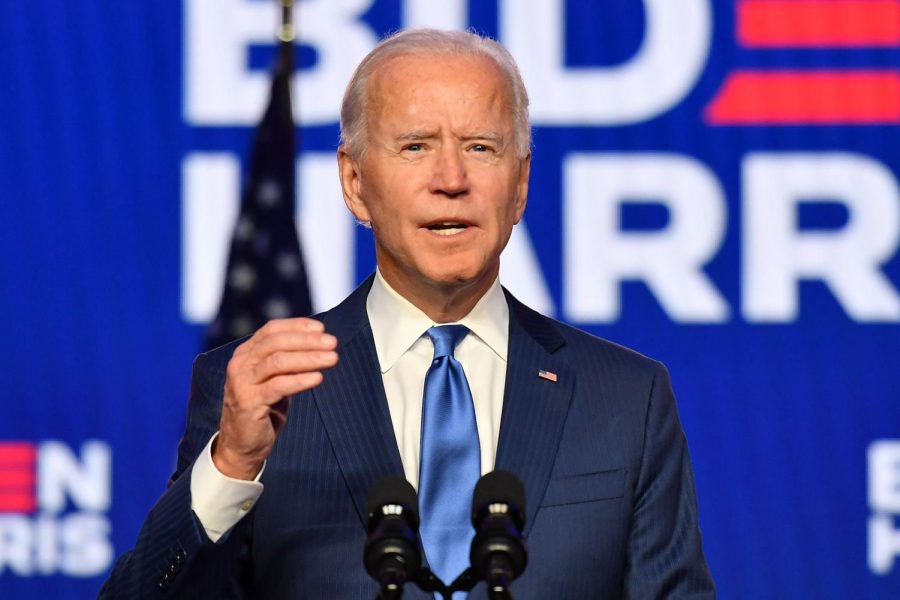 Joe Biden has won the presidency

Joseph Robinette Biden Jr. was born in Scranton, Pennsylvania on November 20th, 1942, growing up as a Roman Catholic in a middle-class household.

However, Biden led most of his young life in Wilmington, Delaware, where he attended Archmere Academy. There, he was on the football team and participated in an anti-segregation sit-in. Biden was elected class president during his junior and senior years of high school and seen as a school leader, despite his poor grades.

After graduating high school in 1961,  went on to attend the University of Delaware, majoring in history and political science. Before his graduation in 1965, he met his future wife, Nelia Hunter, while on vacation in the Bahamas. Biden supposedly told his son, Hunter while they were dating that his goal was to become a senator by the age of 30 and then go on to be president.

For law school, Biden went to Syracuse University. Throughout his youth and into adulthood, Joe Biden had an issue with stuttering and tried to help the problem by reciting poetry in the mirror. His stuttering has been faulted with harming his debate performance throughout 2019 and 2020.

Two years after his marriage, Biden clerked for a law firm headed by Republican William Prickett in Wilmington. He said that he, “thought of myself as a Republican.” He supported local Republican politicians but registered as an independent out of distaste for Republican presidential candidate Richard Nixon.

In 1972, Biden entered the U.S. Senate election for Delaware. Biden was the underdog in a race against Republican incumbent Sen. James Boggs. There was no other Democrat who wanted to run against Boggs as he had the full support of the Republican Party and President Nixon behind him. However, Biden campaigned with no money and with a staff exclusively comprised of members of his own family, including his sister who managed the campaign. The summer before the election, Biden trailed his adversary by over thirty points but went on to win the senate seat in November by only over three thousand votes.

Only a little more than a month later, Biden’s wife pulled out of an intersection with their three children in the car. The car was struck by a tractor-trailer, and Biden’s wife, Nelia, and their daughter Naomi were killed in the accident. His two sons survived but were hospitalized. Biden was in Washington, D.C. when he got the call that his wife and daughter had died and had to be sworn into the senate in his sons’ hospital room.

Biden met his future second wife, Jill. in 1975 after seeing a picture of her in an advertisement in a park and being set up on a blind date with her.

Early in his senatorial career, Biden was focused especially on legislation centering on consumer protection and government accountability. He was named by Time magazine as one of the 200 Faces for the Future in 1974.

Biden was a leading opponent of desegregated busing in the senate, leading to many of his white supporters dropping him.

In 1987, Biden attempted to run for President, but his campaign lacked cohesion due to rivalries among his staffers and it failed. Biden ran again for the 2008 presidential election, but eventually dropped out and ran with then-Senator Barack Obama as his running mate.

After the news was announced, Biden tweeted, “America, I’m honored that you have chosen me to lead our great country. The work ahead of us will be hard, but I promise you this: I will be a President for all Americans — whether you voted for me or not. I will keep the faith that you have placed in me.”