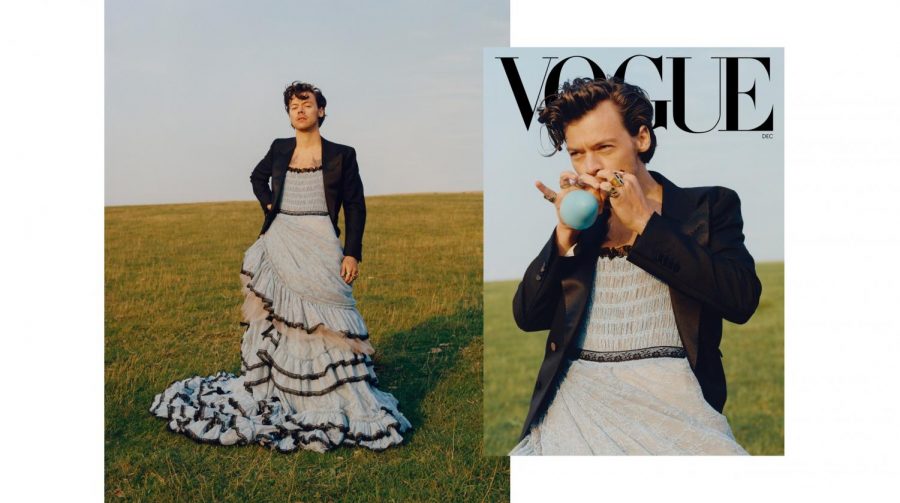 Opinion: Clothes Should Not Have A Gender

Vogue magazine had Harry Styles on the cover in a blue dress. His fans were elated to see him on the cover in a dress as it blurred the hard line between women’s and men’s fashion. Styles are comfortable not conforming to societal norms in a variety of areas in life.

Clothes should not have a gender. Wearing something cannot determine your character. Men have had long hair and short hair as the norm in different eras. Same with women. If a man wanted to wear a dress, why should that be socially unacceptable? He would be called feminine because dresses are seen as only for women. But if I wore a pair of pants, I would still be considered feminine even though pants are considered masculine.

However, not everyone was happy about the cover.

Candace Owens, a conservative author, commentator, and political activist, took to Twitter and wrote: “There is no society that can survive without strong men,” Owen tweeted. “It is an outright attack. Bring back, manly men.” Owens has since continued to talk about how men should not wear dresses and skirts. But who should dictate if a dress is feminine or masculine? If what she said is true, then can women not wear pants? Who decides what gender clothes have?

Owens has multiple pictures of her wearing suits on her social media, so why should she be allowed to wear clothes that society deemed manly and not get the same backlash she is giving to men for wearing clothes society deemed feminine? I don’t think you should cherry-pick what to have an opinion on if she is doing essentially the same thing but with the roles reversed. Also, how does someone else wearing something affect you? If a man wants to wear a skirt, that is his decision, and he is not doing it to please you. He is most likely wearing a skirt because he feels secure, safe, and empowered in it, and it makes him happy. Unless someone is wearing something offensive, I don’t think anyone should comment on someone else’s style choices.

There are many historical reasons why women wore dresses and men wouldn’t. Women generally stayed home and took care of the kids and cooked and wouldn’t typically leave the house; therefore, they could wear a dress that would allow breathability and comfort. Men typically would go out to work and be in public, and sometimes it could get cold, and a dress would not be convenient. The men would need to get around more manageable, and wearing pants just seemed more practical back then. Wearing trousers was better for running, jumping, climbing and anything active. In practically any other time period than the present day, women would not be active in that sense. There were not many female athletes. When we think of men wearing dresses today, there is still a lot of stigma around that subject, but mainly from people raised during the 1950s thru the 1980s, when it was socially unacceptable to wear a dress.

Not only were men ostracized for wearing “girls” clothing, but women were often ostracized for wearing “boys” clothing. Once the roles for women were set into place, meaning they should stay in the house and take care of the family, wearing pants and “manly” clothing was socially acceptable. Women were rarely seen wearing pants or vests and shirts. Slowly, as time progressed and women started fighting for their rights, they would more and more begin to wear pants, and eventually, it became common to see women in pants and shirts.

What Owens fails to see is that men have been wearing dresses and skirts for ages. Many people from Japan, both men, and women would wear Kimonos during tea ceremonies, weddings, formal events, and seasonal and religious festivals. Many men in the ancient greek times wore something similar to a dress; they would wear togas, even Jesus wore a toga. Also, Scottish men wore and still wear kilts. It is considered the traditional dress of Gaelic men and boys in the Scottish highlands.

In Scottish ancestry, kilts are a symbol of honor for the clan they belong to, but slowly the kilt was only seen as a battle uniform. Gradually it became more practical for men to wear pants, but why did it have to be so bad for a man to wear a dress? At what point did we decide that it was outrageous?

About the Writer
Gigi Lea, Staff Writer
Leave a Comment