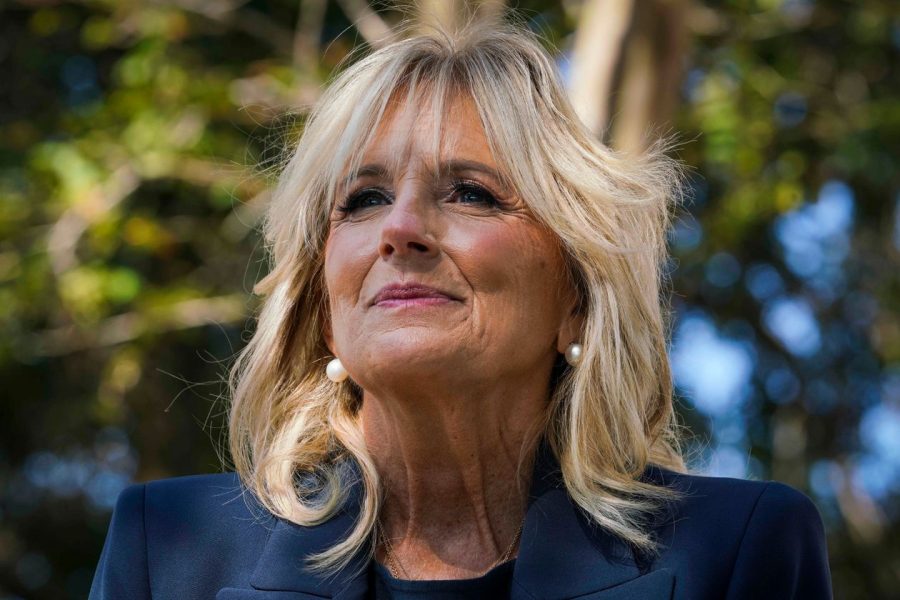 Dr. Jill Biden speaks to reporters during a campaign event in St. Petersburg, Fla., on Nov. 3.

The Wall Street Journal recently published an op-ed by Joseph Epstein titled Is There a Doctor in the White House? Not if You Need an M.D. In this article, addressing First Lady-to-be Jill Biden as “kiddo,” Epstein recommends she drop the “Dr.” from her name.

Plenty of backlash ensued, especially in response to the condescending tone that Epstein uses throughout the article. Even Merriam-Webster seemed to take a hit at Epstein, tweeting, “The word ‘doctor’ comes from the Latin word for ‘teacher.’” Dr. Jill Biden has a Master of Education and a Doctor of Education, along with being a schoolteacher.

“That was such a surprise,” Dr. Biden said on The Late Show. “It was really the tone of it…He called me ‘kiddo.’ One of the things that I’m most proud of is my doctorate. I mean, I worked so hard for it.” Dr. Biden received her doctorate from the University of Delaware in 2007.

I can only assume that this article would never be written about one of the many men with non-medical doctorates using the title. Something that Vice President-Elect Kamala Harris’ husband, Doug Emhoff, agrees with me on. “This story would never have been written about a man,” said Emhoff.

The misogyny is so potent, so obvious, that it makes me sick. I thought that we would be in the past this as a nation. Taking cheap shots at powerful women is not a good look.

What is so infuriating is not that someone would write this, but that someone would publish it. You would think that a newspaper as prestigious as The Wall Street Journal would be above publishing childish rants singling out an accomplished woman for being proud of her achievements. For years, women have been prevented from accomplishing so much, but now that society has granted women the possibility for greater accomplishment, they are shamed for it.

Epstein is an 83-year-old man with neither a real doctorate nor a master’s degree, while Dr. Biden has both. He compares her achievements to honorary degrees often handed out to celebrities and other influential figures. That’s false. Dr. Biden worked toward her doctorate for more than a decade while also raising three kids.

In the article, Epstein argues that only medical doctors should use “Dr.” in front of their name. “A wise man once said that no one should call himself ‘Dr.’ unless he has delivered a child,” said Epstein, incidentally leaving out many kinds of medical doctors.

While it is very common to associate the word doctor with a physician only, those are not the only kinds of doctors. According to Merriam-Webster, “while doctor most often refers to a medical doctor, academic doctors can rightfully claim it too. And they have lexical and etymological evidence to back their claim.” Therefore, there is no legitimate reason for Dr. Biden to drop her title.

Not only does Dr. Biden deserve to keep her well-earned title, but she should. She’s like a real-life Barbie; she shows little girls that not only can they be first lady, but also a doctor, a teacher, a mother, a philanthropist, a student, and more. Dr. Biden is an inspiration and she should never let some man keep her from inspiring.

No man has the right to put a woman down. Women are powerful, strong, and deserving of the titles that they have rightfully earned.