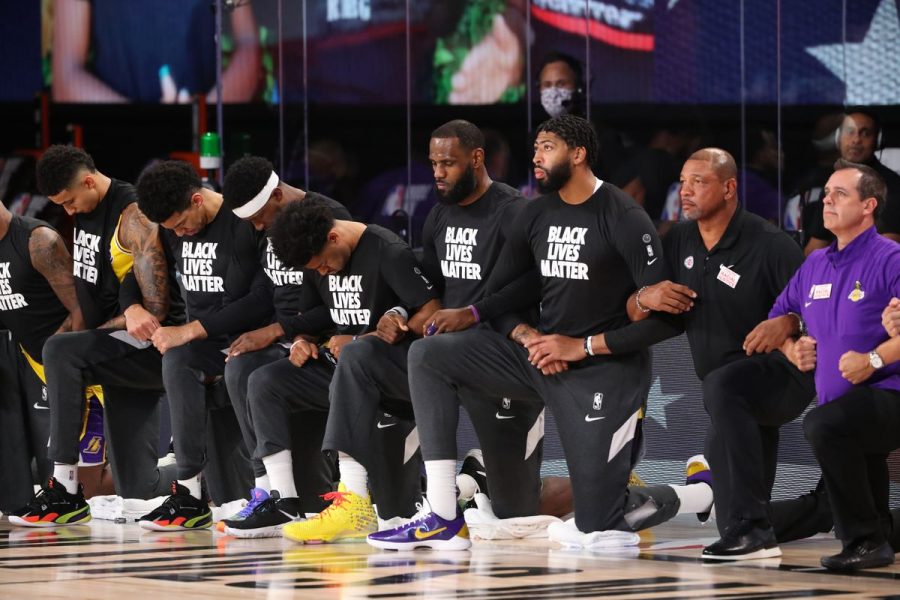 Lakers, Clippers, Pelicans, and Jazz all took a knee for the anthem for the NBA restart on Jul 30, 2020

If you were watching the National Basketball Association, for the last two months they have been in the “NBA Bubble” located in Orlando, Florida. Due to the shootings of George Floyd and Breonna Taylor, you would notice on the back of every single uniform right above their number, there is a phrase. A phrase that relates to the social movement of Black Lives Matter. This social movement is advocating for non-violent civil disobedience in protest against police brutality and racially motivated violence against black people. The phrases on the back of these NBA jerseys are related to common sayings in the movement. Some of these say: “Say Their Names”, “How Many More”, “Vote”, and simply “Black Lives Matter,”. Those were just some of the messages on the back of player’s jerseys such as Lebron James, Anthony Davis, and James Harden. For players that are from foreign countries or have foreign roots like Luka Doncic, Kristaps Porzingis, and Giannis Antetokounmpo who have lived in Slovenia, Latvia and Greece have chosen for their phrase to be in their native language, so that international viewers can understand what is happening in the states as well.

Players and coaches feel that they are limited to the impact that they can have on the community just by staying at the Disneyland Resort. They use these phrases on the back of their jerseys, the t-shirts saying “Black Lives Matter” and writing and art on player’s shoes to make Americans aware of the BLM movement, and the systematic injustice and racism that has been going on for four hundred years. From the abolition of slavery to Rosa Parks to Martin Luther King to today, people and organizations have been fighting for equal rights for the African American community. And many feel that now with the election coming up, Americans have the power to change the systematic racism that haunts this country. NBA players and athletes nationally and globally are using their platform more than ever to demand change. And in the NBA before the majority of their games, a lot of players kneel during the National Anthem.

The action of kneeling was first done by Colin Kaepernick, a former quarterback for the San Francisco 49ers, when he kneeled in protest against police brutality during the national anthem at the preseason game against the Green Bay Packers in 2016. The reasoning behind the action of kneeling is when Kaepernick asked retired Army Green Beret Nate Boyer for the most respectful way to peacefully protest the movement without being disrespectful to the flag. Because of this action, Kaepernick has basically been kicked out of the NFL. And now, this is what every sports team does to raise awareness for the Black Lives Matter movement.

Many NBA players thought that kneeling wasn’t enough. And the recent shootings of Floyd and Taylor sparked the most recent protest amongst NBA players. That occurred in Game Five, a matchup between the Milwaukee Bucks and the Orlando Magic on August 26th. The staff and players of the Milwaukee Bucks never left the locker room and the boycott continued for the two remaining games that were supposed to be held that day.

After the boycott occurred, all players and coaches met to discuss whether to continue the NBA season. Basketball superstars like Lebron James and Kawhi Leonard wanted to discontinue the season because they felt that they were not bringing enough awareness to the Black Lives Matter movement by staying in the NBA bubble. Through much debate, they ultimately decided to continue because they had a job to finish. These actions made it extremely clear that systematic racism and police brutality needed to come to an end.

The topic of systematic racism is one that athletes are trying to make the American citizens aware of. In an interview done in 2018 Laura Ingraham (an American conservative television host), told Lebron James to “Keep the political commentary to yourself and shut up and dribble”.  Athletes and specifically NBA players today have embodied the phrase “Shut up and Dribble” and used it to fuel their fire. These players will simply not “Shut up and dribble” because they are trying to use their platform to make change. Everlasting change systematically.