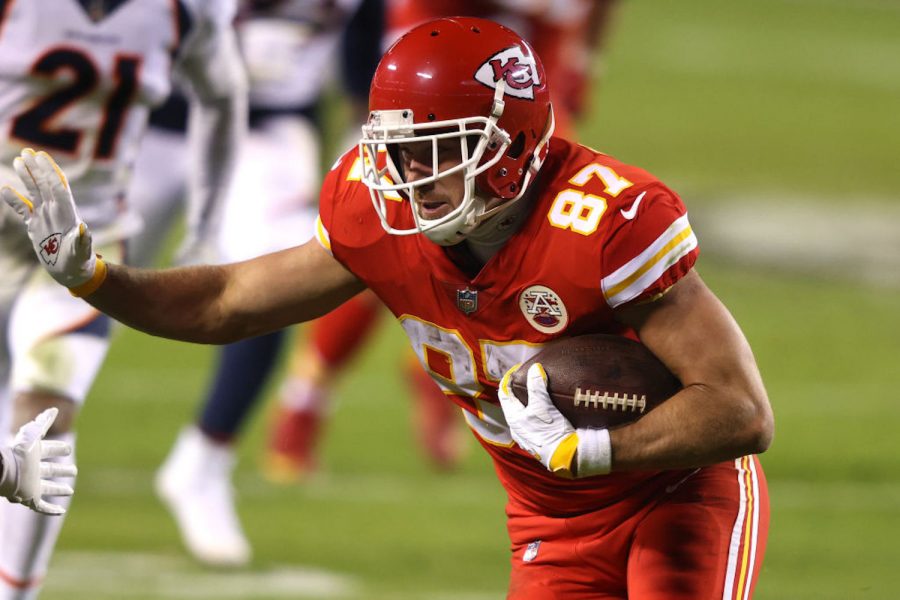 Travis Kelce #87 of the Kansas City Chiefs rushes during the second quarter of a game against the Denver Broncos at Arrowhead Stadium on Dec. 06, 2020 in Kansas City, Missouri

The 102nd season of the National Football League (NFL) will be different than any other year due to COVID-19. That doesn’t stop football games from happening. Here are the playoffs’ rules and the sports editor’s prediction on who will be the reigning champion.

These are the rules for the playoffs:

Since Wild Card games happened last weekend, here are our predictions for the second round of the NFC bracket:

This will be an enticing matchup as it highlights excellent players from both teams. Elite wide receiver Davante Adams from the Packers and talented cornerback Jalen Ramsey from the Rams will be must-watch entertainment. In the end, we have the Packers winning this matchup. Due to quarterback inconsistencies for the Los Angeles Rams and strong quarterback play from Aaron Rodgers (Green Bay), the Packers should have enough to get past the Los Angeles Rams.

This matchup may be the last between two of the greatest quarterbacks of all time. This game features QB Tom Brady of the Buccaneers and QB Drew Brees of the Saints, making it worth watching. We believe that Tampa Bay will win this matchup because of their offensive firepower and the clutchness that Tom Brady has shown repeatedly throughout his career.

Here are our predictions for the second round of the AFC bracket:

We think that this matchup could go either way. However, we gave a slight edge to the Buffalo Bills because they are arguably the hottest football team. Additionally, between sensational quarterback Josh Allen and star wide receiver Stefon Diggs, the Bills offense should perform well and score consistently. It is truly going to come down to which QB plays better.

This one is bound to be a shootout. If you enjoy watching long passes and touchdowns, this is the game to see. At the end of the day, the Kansas City Chiefs are the better team and will be victorious. Quarterback Patrick Mahomes of the Chiefs, tight end Travis Kelce, and wide receiver Tyreek Hill will be far too much for the Cleveland Browns.

Here are our predictions for both the NFC and AFC Championship games:

In this matchup, we have Tampa Bay beating Green Bay. We believe that this upset will occur because the Packers are far too reliant on Davante Adams. With the recent emergence of wide receiver Antonio Brown, the Buccaneers will be too much to handle for the Green Bay defense.

We have the Chiefs beating the Bills in the AFC championship. Although Buffalo is an excellent football team, the Chiefs are on another level. It should be an entertaining matchup between quarterback Josh Allen of the Bills and quarterback Patrick Mahomes of the Chiefs.

Here is our prediction for Super Bowl LV:

Lastly, experienced quarterback Tom Brady will take on young stud quarterback Patrick Mahomes. These two offensive fire powers will compete in a very close game, but we think that the Kansas City Chiefs will grind out a win. The Super Bowl will come down to which defense steps up. Given that Kansas City’s defense is slightly better, the Chiefs are favored in this historical Super Bowl matchup.