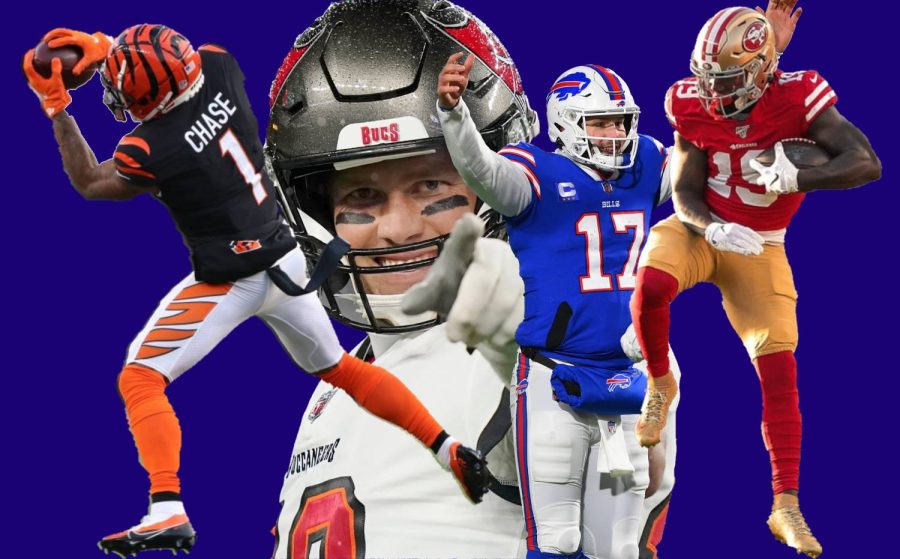 Wild-Card Weekend: The Good, the Bad, and the Ugly

With close games, blowout wins, and flaring tempers, the NFL Wild-Card Round was full of excitement.

This weekend marked the start of the 2022 NFL Playoffs – and what a start it was! With six different games spread across the three day weekend, NFL fans were not disappointed to see twelve of their favorite teams face off in single-elimination. Let’s break down the wins, losses, and upsets in case you need a recap of the action.

The weekend kicked off with the six-seed Raiders against the four-seed Bengals. Led by quarterback Joe Burrows and wide receiver Ja’Marr Chase, the Bengals seized an early lead and never looked back, at one point holding a 14 point buffer over the visiting Raiders. Las Vegas attempted a comeback drive in the fourth quarter, but a Derek Carr interception in the final seconds of the game sealed it for Cincinnati, bringing the city its first playoff win in 31 years! The final score of this thriller was 26 to 19 Bengals.

With such an exciting game, however, some team had to balance things out. That balance came with the next game, where the Buffalo Bills walloped the New England Patriots in an absolute blowout 47 – 17 win. Josh Allen and his teammates combined for nearly 500 yards total offense and handily outscored the Patriots while not committing a single turnover, with Allen throwing a team playoff record five touchdown passes. The Bills defense also contributed with three sacks on Patriots QB Mac Jones and had close coverage on receivers throughout. Overall, while not very entertaining to watch, the game demonstrated huge improvement by the Bills, who struggled against the Patriots earlier on in the season.

Games continued on Sunday as the Eagles and Buccaneers went head to head. Fresh off a Super Bowl title last season, the two seed Buccaneers continued their dominance of the NFC Conference by defeating Philadelphia 31 – 15. The Eagles defensive unit couldn’t stop the Tom Brady – Mike Evans combo, and struggled to force turnovers throughout the game in spite of four sacks and strong quarterback pressure. Eagles quarterback Jalen Hurts also found difficulties passing, completing only 23 of 43 throws with two interceptions. The Buccaneers seem poised to sail to yet another NFC Championship game, and possibly even the Super Bowl.

The No. 6 49ers against the No. 3 Cowboys was another entertaining game to watch. The close 23 – 17 win for the 49ers came down to the wire, with Dallas QB Dak Prescott attempting to spike the ball as time expired in a controversial ending. 49ers running backs Eli Mitchell and All-Pro pick Deebo Samuel combined for nearly 170 rushing yards and despite struggling to convert touchdowns in the early parts of the game, the Niners maintained a lead throughout.

Sunday’s final game was the No.7 Steelers at the No.2 Chiefs. There were no expectations for the Steelers coming in – quarterback Ben Roethlisberger, who is set to retire after this season, made headlines before the game, reportedly telling his team that they’re “probably not a very good football team” and to “have fun”. The Chiefs proceeded to confirm his hypothesis, blowing out the Steelers 42 – 21. Chiefs QB Patrick Mahomes went 30 – 39 for over 400 yards passing, and scored so many touchdowns that the Kansas City stadium reportedly ran out of celebration fireworks! Big Ben went 29 – 44 for 215 yards in what was likely the final game in his career.

Wild Card Weekend ended with the Monday evening match between the Rams and the Cardinals. Despite a strong start to the season, the Cardinals continued head coach Kliff Kingsbury’s trend of burning out early, as they lost many of their recent games leading up to the playoffs. The Rams outgunned Arizona with 375 yards to the Cardinals’s 183, with Matthew Stafford finding MVP candidate wide receiver Cooper Kupp for five completions. Meanwhile, Kyler Murray only completed 19/34 passes, and threw two interceptions to boot. Tension grew between the teams throughout, with a few close calls for fights, as well as a scary injury to Cardinals safety Budda Baker late in the game. With a strong offense and a defense anchored by 3x Defensive Player of the Year Aaron Donald, the Rams are another Super Bowl contender that fans should look out for in the coming weeks.

So, that’s it – a quick recap of every Wild Card game played this weekend. It’ll be fascinating to see how the playoff picture develops over the next two months, as there are several very strong teams who could make bids for the Super Bowl; apart from the teams that played this weekend, the No. 1 ranked Titans and Packers also have great shots at the title. If you miss the action next week, check in here for another breakdown – this time of the Divisional Round. Until then, stay safe, and remember: never bet against Brady.