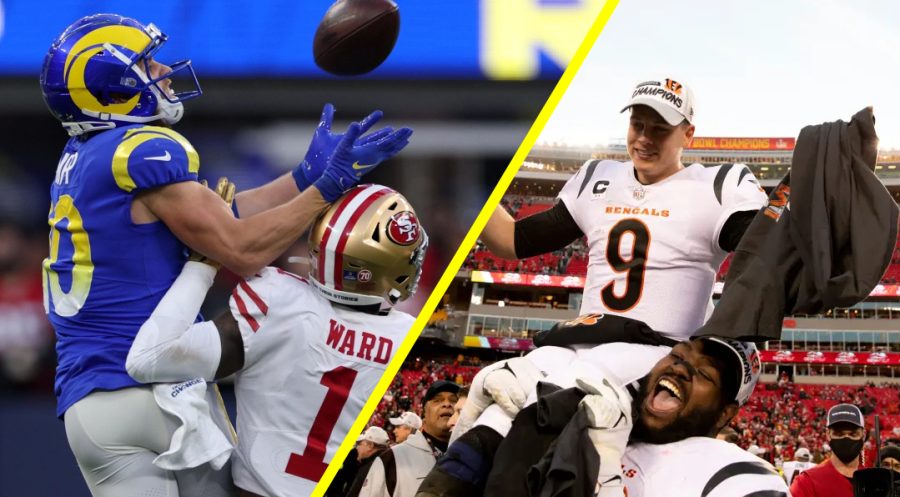 Memorable playoff moments from this weekend

What an exciting past few weekends! The NFL playoffs are in full swing as we come up on the final game of the year, the Super Bowl. From 14 teams down to just two, these games have continued to surprise and astound. Let’s review this weekend’s games ahead of the Super Bowl, which is set to kick off February 13.

Sunday’s action started in Kansas City, where the Chiefs faced off against the Bengals for the AFC Championship. Analysts and fans alike favored the Chiefs to win, but questions remained about the Bengals, a young team who has surprised thus far.

From the start of the game, the Bengal found it difficult to stall the Chiefs offense, with Mahomes completing pass after pass to receiver Tyreek Hill and tight end Travis Kelce. At the same time, the Bengals offense crumbled against the stalwart Chiefs, who put constant pressure on the pocket and prevented big gains. The Chiefs went up 21-3 on the Bengals, and the game seemed decided already.

Nevertheless, the Bengals found a second wind, bringing the score to 21-10 and making a crucial stop on the Chiefs as time expired in the half, preventing another score. Coming out of the break, Cincinnati continued the attack on both sides of the ball, scoring on drive after drive and stopping Kansas City in their tracks to bring the score to 21 – 21. On the next drive, a 50-yard kick from Evan McPherson continued the Bengals’ success, giving them their first lead of the game, 24 -21. The Chiefs made a drive back down the field, however, and seemed poised to score a touchdown with only a few seconds left in the game. With Patrick Mahomes in the pocket for what seemed like an eternity, Bengals defensive end Sam Hubbard sacked him for a huge loss, forcing the Chiefs to settle for a field goal and sending the game to overtime.

Wow! For their second game in a row, the Chiefs are playing out of regulation. And, also for their second game in a row, they win the coin toss. Yet, as they start their drive, Mahomes immediately throws a near-interception, and, on the very next play, Bengals corners Jessie Bates and Vonn Bell work together to pick off the ball from Tyreek Hill. The Bengals then decisively march down the field, with running backs Mixon and Perine putting McPherson in range for an easy 30 yarder. The kick is straight down the middle, and the Bengals, the worst team in the league just a few years ago, are going to the Super Bowl.

The thriller in Kansas City was followed by the 49ers and Rams facing off in Inglewood for the NFC Championship. Far from the sea of Chiefs red at their game, the stands were evenly split between the two teams, and, in terms of both record and talent, they were similarly matched. Red hot Deebo Samuel and the Niners would bring the heat to the Rams at home, promising an exciting Sunday night between two underdog picks.

Garoppolo picked up two touchdowns in the second and third quarters to Deebo Samuel and George Kittle, putting the 49ers ahead 17 – 7 and finding the endzone for the first time this postseason. However, Rams receivers Cooper Kupp and Odell Beckham Jr. continued their dominance, with Kupp scoring two touchdowns as the Rams closed the gap to 17 – 14. Soon after, the 49ers had a chance with an interception opportunity, but it was dropped. The Rams took advantage; after a long pass and penalty, they found themselves in field goal range and tied the game 17 – 17. With a quick stop by the Rams, they soon had the ball back and, once again, settled for an easy field goal. 20 – 17 Rams.

Fourth quarter. The 49ers have the ball. Following intense pressure from Aaron Donald and the rest of the LA defensive line, it’s third down – less than two minutes left. The Niners need to score here. Pass is thrown, it’s tipped, and… intercepted! After three kneels, the game is over, and players and support staff rush the field. For the second time in four years, the Rams are NFC Champions and Super Bowl bound.

What incredible postseason runs for the Rams and Bengals, both unlikely teams who overcame tough matchups and played great football to reach the Super Bowl. Unexpected upsets, nail-biting wins, and thrilling touchdowns, interceptions, and sacks – what more could you ask for? But the action isn’t over – make sure to stay tuned as the Mustang covers the Super Bowl on February 13. Until then, this is Evan Ballow, Mustang Sports Editor, signing off.