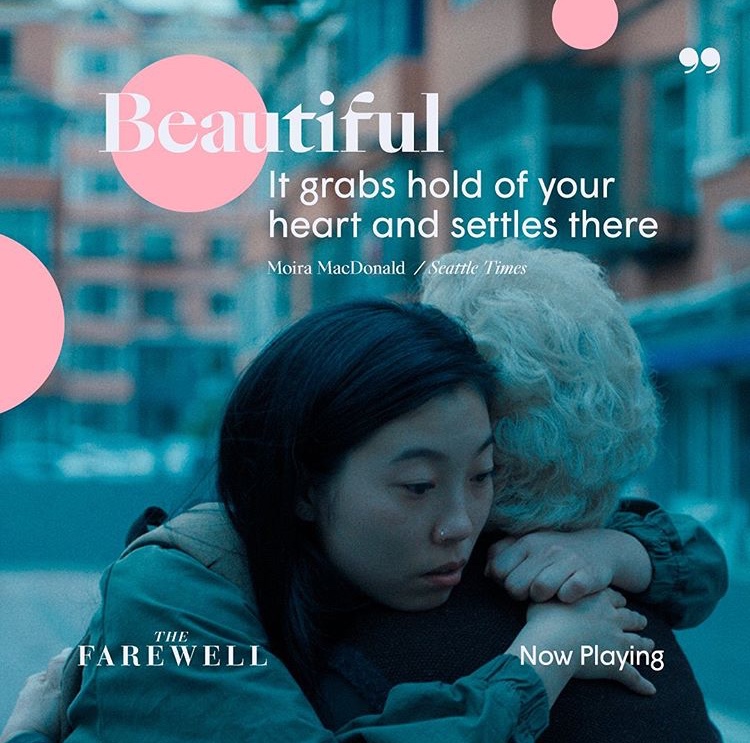 Say hello to “The Farewell”

Say hello to “The Farewell”

I never much liked foreign films. The majority of small innuendos, the little details that truly make up a movie, I would end up missing. When the lights came up and the credits gave way to a massive gray canvas, I would have to leave all my lingering questions behind and simply rejoin the culture and country of my origin.

But “The Farewell,” written and directed by Lulu Wang and starring “Ocean’s 8” star Awkwafina and Zhao Shuzhen, doesn’t leave me with this dilemma.

Set primarily in Changchun, China, aspiring writer Bili, portrayed by Awkwafina, travels from her home in New York to visit her ailing grandmother, played by Shuzhen, who has been diagnosed with stage four lung cancer and isn’t expected to make it much longer. Here’s the kicker: Nai Nai (Bili’s grandmother) doesn’t know she is sick—and her family is refusing to tell her the true diagnosis.

Much of the movie focuses on the “why” of this decision: Why not tell Nai Nai her true condition? Why let her live out the last few months of her life in the shadows?

The push and pull of Bili’s family struggling with this “good lie” is an American’s nightmare: the idea that critical medical information about you could be withheld even as you face death is unthinkable. As an American, Bili faces these same troubling thoughts, and it is this very fact that makes this movie so fantastic.

While you are plunged into a different country on the opposite side of the planet, not at one point do you feel lost or disconnected. This movie is simply about the tentative relations between family members in the face of a crisis, a concept felt by everyone regardless of ethnicity or nationality. This film does not need to appeal to the American in you; it appeals to the human.

Every corner of this movie is recognizable, discounting the visuals—seemingly permanent gray skies, highrises at every corner, neon illuminating most alleyways.

The cinematography is also especially noteworthy. Unworried with dazzling the viewer with fantastic wide-shots or deeply saddening and troubling portraits of the homeless crouching on the street, this movie focuses its attention in a different direction: pulling you into the singularity of one moment. For example, in one short moment, the viewer watches Bili’s grandmother, sitting in a pale blue paper gown against a small, brightly-lit corner of a hospital room. The manipulation of color, the frigid hospital lights—they sit heavily upon Nai Nai’s shoulders, and the viewer is forced to come to terms with the reality of the situation and the constant weight of the secret Bili and her family must keep.

Palpable themes of profound sadness, permeating melancholy, and a deep love connect you, the viewer, so strongly to a random family in China that the end will bring you to tears.