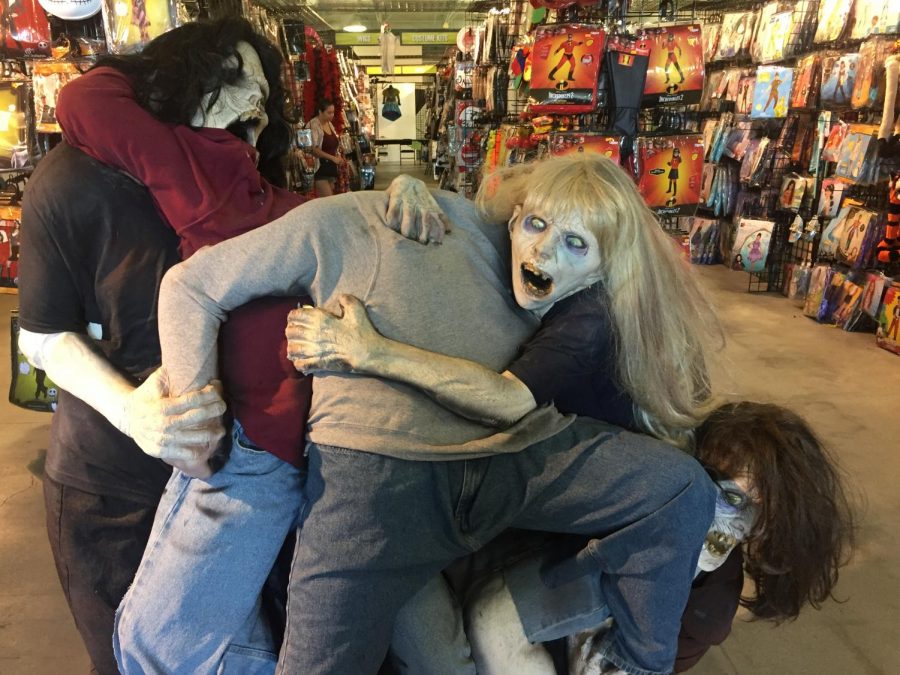 Gallery|3 Photos
Photo by Kylie Schwartz
A gray mass of gray people clawing at a headless person by the entrance.

Wondering what to do for Halloween? Go check out some decor

Since I am too old to trick-or-treat anymore, I needed to do something else to feel like I experienced Halloween. So, I went to Halloween Express, which seemed like a good way to get in the spirit before I give candy to children other than myself.

For those of you who don’t know, Halloween Express is one of those Halloween pop-up stores that are here for like a week and then descend back into the hell-hole from whence it came around November 6th. One day, this store was a busted-down Staples stripped to its concrete bones, and the next day it’s a warehouse filled to the brim with fake mustaches, foam swords, and the most expensive rubber statues I have ever seen in my entire life.

The second I emerged from the blustery cold into Halloween Express, my ears were met with the heart-racing theme music to Stranger Things, but this was sadly the peak of my auditory experience of the store; they only played 70’s disco thereafter. The giant rubber statues which can be found in your rich neighbor’s lawn were also kind of a let down.

For one, these guys were really rude. There was a butler by the door and it suddenly became apparent why my mother always tells me to put on sunscreen even if it’s cloudy out. That man was wrinkled. He offered me a Butterfinger (my favorite) when I walked in, but when I looked down at his dish it was empty and he just laughed?? What??

When you talk in, right in front of you is this mass of gray people clawing at a headless person. Is this what they call a Zomboo? Zambee? Zimbabwe? Well, whatever it was, children ran behind it and poked their heads out from the back so they could be… eaten, too? Not sure what kind of message that sends.

There was this clown, too, that yelled at me while I was looking at Silly String. I mean, I was thinking of uncapping the canister and spraying it into my mom’s hair, but I didn’t need the morality police on my case! If you’re listening, Pennywise (or whatever your name was), get out of my head! And stop trying to lure me back to your home, I know all about stranger danger! Also, who lives in a sewer??

So this was a bust. Why is it so difficult to make friends with tall rubber Halloween decorations? Oh well, I’ll try again next year.