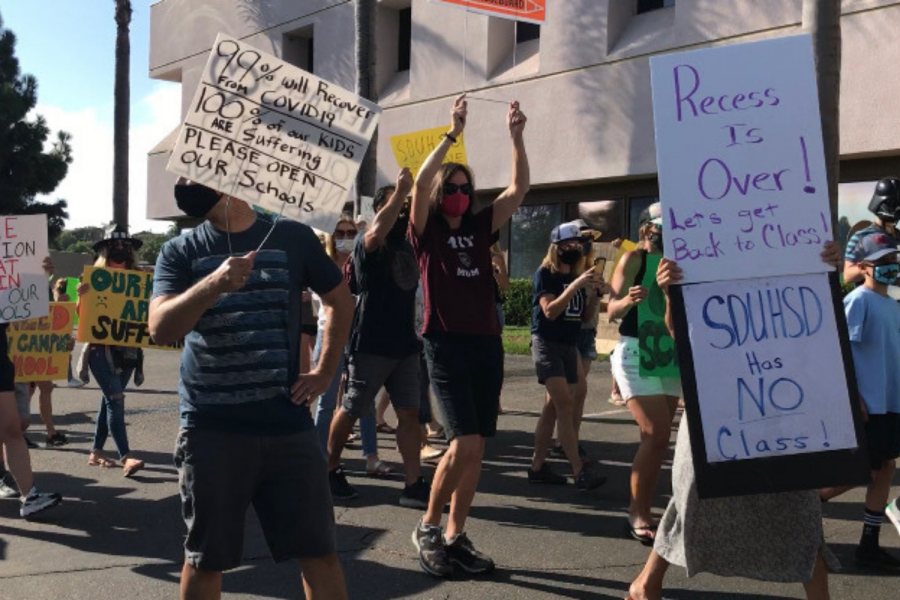 Gallery|5 Photos
Photo by Taylor Lee
Protestors hold up signs such as ‘Recess Is Over! Let’s get Back to Class! SDUHSD Has NO Class!’ and more in front of the SDUHSD building

By Kylie Schwartz and Taylor Lee

THURSDAY, SEPTEMBER 24th– protesters gathered outside the San Dieguito Union High School District building in a demonstration against the districts’ policies regarding the delayed return to in-person schooling.

In response to a message from Superintendent Robert Haley on Sept. 23rd which stated that the school board’s three-to-two vote to postpone the return to in-person schooling through the second quarter– marking the third quarter in total spent in online school district-wide– students and parents marched from the Encinitas Community and Senior Center to the district office in protest.

Although, “protest” was not the chosen word for everyone in attendance on Sept. 23rd. As expressed by John Johnson, father of a student at LCC, “We’re not causing any rift or causing a social disturbance. We’re just bringing awareness and bringing the attention to the Board of what the parents and students want.”

An estimated group of over one hundred students, parents, and teachers were in attendance, bearing signs with slogans such as “Wake up SDUHSD, open school now,” “Our kids are suffering,” and chanting “Hear our voice/Give us choice!”

Being given the choice to return to in-person schooling was a popular request among the protesters. “Why are we keeping our kids out of school all the way through the end of January, when other schools in the district public schools and private schools are opening up for in-person learning?” asks Micheal Allman, who is running for the school board in the upcoming election. “We’re doing a disservice to our kids by not allowing them back in the classroom when we can do so safely.”

For Allman, the question is not whether the board has the ability to re-open schools. “We know it can be done,” he says. “The board didn’t have the guts to actually do it.”

“[The school board was] not thinking about the fact that we have the best weather in the country and we should be able to do things outside, they were not thinking about… invest[ing] in plexiglass,” she said. “People can walk past each other in a hallway outside wearing a mask,” she insisted. “[The school board was] just kicking the can down the road, hoping for something to change instead of being proactive and leading.”

Many parents also expressed exasperation towards the pitfalls of the current school system. “What about…juniors and sophomores?” asked Johnson. “This is a pivotal year for them to get into college. What about those student-athletes that are looking for offers and scholarships…There are a lot of students who are losing out.”

These concerns stretched farther than simply missed educational and scholarship opportunities, however; the question of the effect on students’ mental health was also a pertinent topic for many parents. “I’m also concerned about at-risk kids, and those that have educational concerns that can’t be easily addressed through a computer,” said Johnson.

Mikayla Blumenthal, a freshman at SDA, said she feels isolated at home and finds it harder to learn in the online school environment. “It’s really hard as a freshman when you are stuck at home and we have no say in what we are doing or learning,” said Blumenthal.

One of the largest sentiments among protesters was the lack of transparency between the school board and the public. “The district is hiding the ball,” said Allman. “They’re having closed meetings with the union leadership. Parents need to be communicated with. This is a public organization, public schools, they need to be transparent.”

Some do not believe transparency to be a core issue with the current school board.  “It’s very transparent to anyone with eyes or ears or can read,” said a Physics teacher from the SDUHSD, who wished to remain anonymous. “They’re just doing what they’re told.”

For this teacher, the issue with the school board extends farther than just the five members, or even Superintendent Robert Haley. “They’re just following their orders just like every other technocrat,” he says. “This is a top-down scenario.”

The physics teacher believes that the very virus which is preventing students from returning to in-person schooling is a farce and that the very mask which he was wearing was solely “warranted for social control.”

“We must communicate with each other,” he said. “We can’t do it with the mask on. And that’s the reason we’re wearing the masks– it’s not for viral transmission vectors.”

However, this protest was not against the status of coronavirus’s credibility outright. The majority of people wore masks, though social distancing guidelines were not upheld.

Some people felt that the district made the right decision at this time. Synclare Wennerstorm, a freshman at SDA, believes that safety is the top priority when considering a return to in-person schooling.

“It’s good to weigh things out and see where everything goes to figure out when the safest time is to go back,” said Wennerstorm. Blumenthal expressed a similar thought, hoping that “if we have the chance to go back to school… they [will] provide protections, barriers between students, and keep social distance,” said Blumenthal.

Despite the message of the protest in large, some students actually favored the current remote school system. “I actually like online school,” said Wennerstorm. “It has been better on my mental health, but obviously I miss being in school, hanging out with friends.”

While SDUHSD has allowed some students who are at-risk or in special needs programs to return to in-person schooling since the beginning of September, there is no official message on when all students will return to school on-campus at this time.